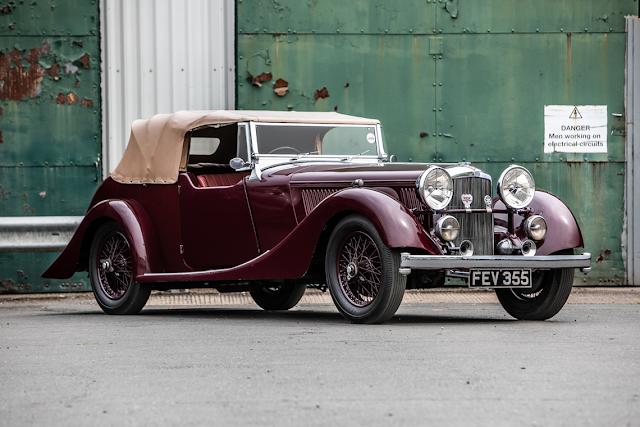 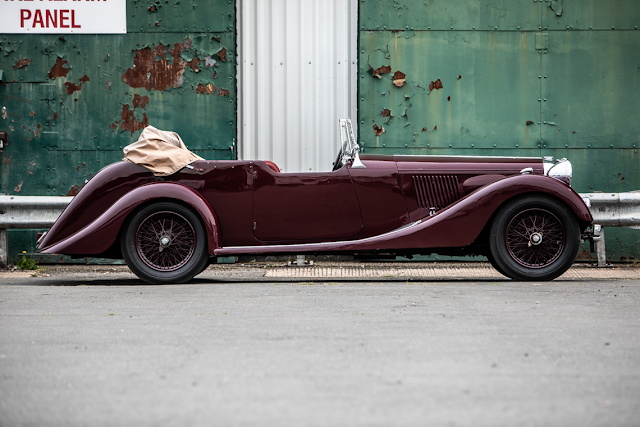 Pre-war development of the six-cylinder Alvis culminated in the announcement of two new models for 1937: the 4.3-litre and the 3.5-litre Speed Twenty Five, both powered by new seven-bearing, overhead-valve engines. The cruciform-braced chassis were similar and embodied the kind of advanced thinking long associated with the marque: independent front suspension and a four-speed, all-synchromesh gearbox - introduced on the preceding Speed Twenty - were retained, with the additional refinements of driver-controlled Luvax hydraulic dampers and servo-assisted brakes. On a test with Autocar, the Speed Twenty Five demonstrated remarkable top-gear flexibility combined with a maximum speed of 95mph, and was found to possess qualities of, "quiet running and general refinement in a striking degree." Sturdily-built and endowed with a generous wheelbase, the Alvis six attracted some of the finest examples of the pre-war coachbuilders' art, although the Speed Twenty Five's initial chassis-only price of £775 meant that ownership was necessarily confined to wealthy connoisseurs.

This unique 3.5-litre Alvis is the creation of our vendor Alan Wildin, a qualified professional coachbuilder, who, in 1982, established his highly regarded coachbuilding company, Alwil Bodies Ltd. Alan's dream was to design and build his own pre-war car, and the story of the restoration and construction of this 'Continental Tourer' is recorded in an accompanying illustrated book. 'FEV 355' is a 4.3-Litre model currently fitted with the engine from an Alvis Speed Twenty Five.
The project began in the early 1990s, commencing with a strip down to the rolling chassis, which was then clothed in a Drophead Coupé body of Alan's own design. Alan's criteria for the body included a lengthy bonnet, no visible spare wheel, wide doors, fold-flat windscreen, fold-flat convertible hood, full tonneau cover, no side windows, and front wings running continuously through to the rear wings via full-length running boards. It was intended that the overall design would be in keeping with that of the 1930s period, and one that Alvis would have approved of.
To this end, the original bonnet was retained, whilst the aluminium alloy body (its panels welded together using oxyacetylene) was mounted on a framework of English Ash. One of Alan's aims was that the body should be free of any projections, and the incorporation of flashing indicators within the pre-war Lucas rear lights enabled him to avoid having to use semaphore trafficators. Few would deny that the overall result is most pleasing and a credit to its creator.
On 27th April 1995, 'FEV 355' passed the MOT test, and the following day – taxed and insured – was taken out for its first shakedown run. Alan's observations are recorded in the aforementioned book: "All was well, the clutch operated, the gears were all there, the brakes proved adequate, the water temperature held at 76 degrees, the oil pressure read 40psi, the back axle made no strange noises, the body remained in place, and no doors fell off."
Since then, 'FEV' has been campaigned extensively by the Wildin family, attending Alvis Club and other events at venues including Brooklands and Prescott. Described by our private vendor as in 'generally excellent condition', this unique and most stylish soft-top Alvis is offered with sundry restoration bills, an old-style logbook, and a V5c registration certificate. Regretfully offered to auction due to advancing years and long term residence in Spain, our vendor is now offering the pride of his collection to the next custodian. 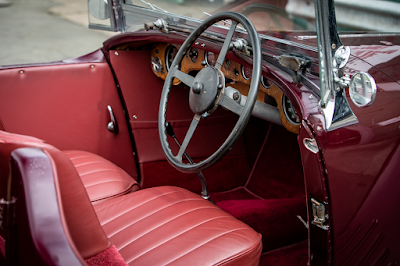 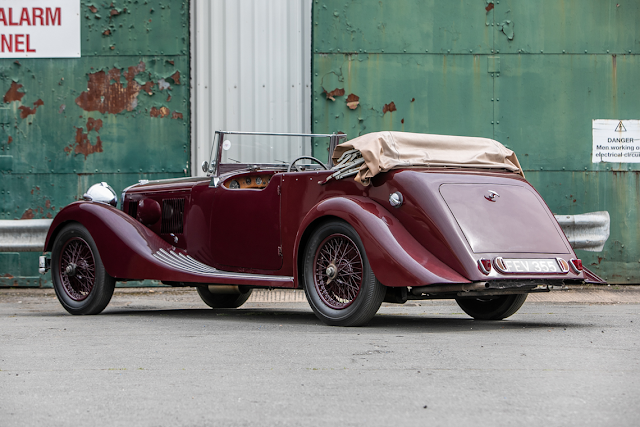 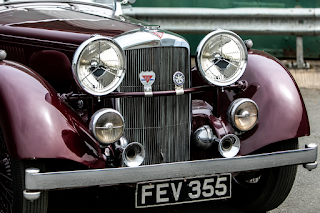 CLASSIC CHATTER
Powered by Dragons
Posted by jeffharris at 14:16