Welcome back to Classic Chatter's daily look at upcoming auction lots.
Thank you for all the Get Well messages received over the last two months they were much appreciated

Viewing will be on Tuesday 10th May from 9am until 7pm 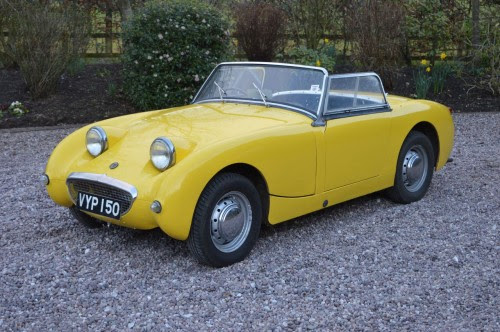 Click Here for Full Screen Image - Click Here to Download Image
In 1958 BMC launched a new, small sportscar based on well-proven Austin A35 mechanical parts. Produced at the MG factory in Abingdon, the Austin-Healey Sprite introduced a whole new concept in sportscar ownership that would later be copied by Triumph and MG themselves.
Powered by a twin-carb 948cc A Series engine driving the rear wheels via a four-speed gearbox, it was capable of over 80mph. The body was a simple design with no external boot access and with minimal decoration. The one-piece bonnet was originally designed to include pop-up headlamps, however the mechanisms proved too complex so the lamps were mounted in a fixed pod. This unusual styling feature only added to the car’s cute appeal and it was quickly dubbed the ‘Frogeye’.
The basic concept survived until the last MG 1500 left the Abingdon production line at the very end of 1979, a fitting tribute to the concept of a ‘no-frills’ small-capacity British sports car designed for the enthusiast.
This original and unmolested 1958 model was purchased by the vendor’s husband in 1984 for £1,250. Over the years it has been a much loved member of the family, getting regular maintenance from the local garage and a respray some years ago in bright yellow to keep the car looking fresh.
It comes with a set of side-screens and a serviceable hood, retaining its original instruments and steering wheel as well as its steel bonnet and a 948cc engine. The history file includes a buff logbook, a selection of interesting books on the Austin Healey and no fewer than 30 old MOTs, showing the car's continuous usage over many years.
Very much in the use and improve category, it is the perfect candidate to drive over the summer months, tidying and generally smartening as funds and time allow.