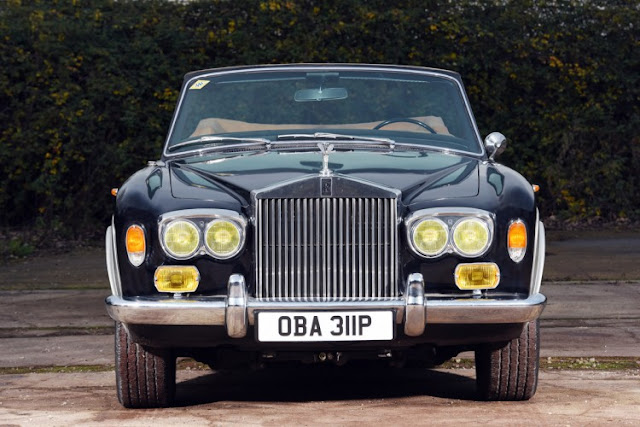 These exclusive cars were hand built in the best traditions of British coachbuilding using only materials of the finest quality including Wilton carpeting, Connolly hide and burr walnut veneers, such painstaking attention to detail resulting in a price some 50% higher than that of the standard Silver Shadow. Nevertheless, demand for these more glamorous alternatives to the much more numerous four-door model was strong right from the start, a state of affairs that resulted in them being given their own model name – ‘Corniche’ – in March 1971.
In Corniche form, Rolls-Royce’s well-tried 6.7-litre V8 produced around 10% more power than standard and proved capable of propelling the car to a top speed in excess of 120mph with sportscar-beating acceleration to match. The model proved a major success for Rolls-Royce; periodically revised and up-dated, it remained in production well into the 1990s, the last (Convertible) examples being delivered in 1995.
Finished in the rare and desirable shade of black over silver with a tan leather interior, this Corniche convertible was purchased in the USA some years ago and is presented in generally good condition both bodily and mechanically. The car is custom cleared in EU, offered with UK V5 registration. 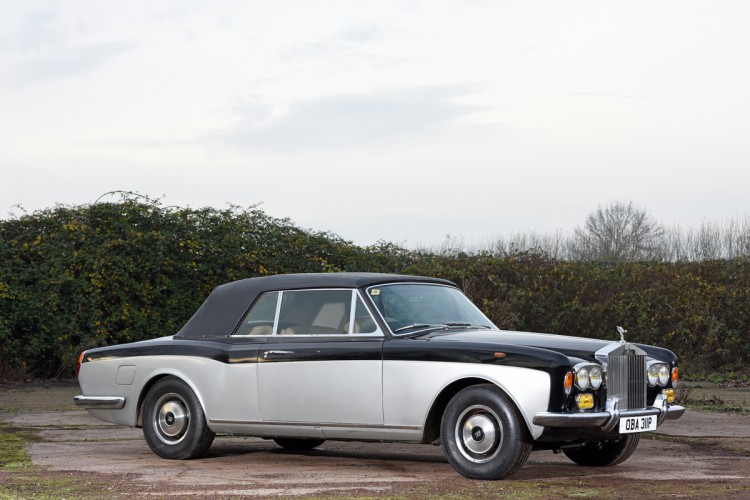 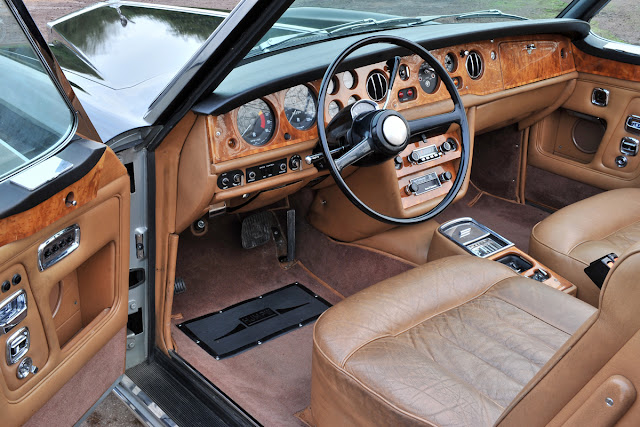 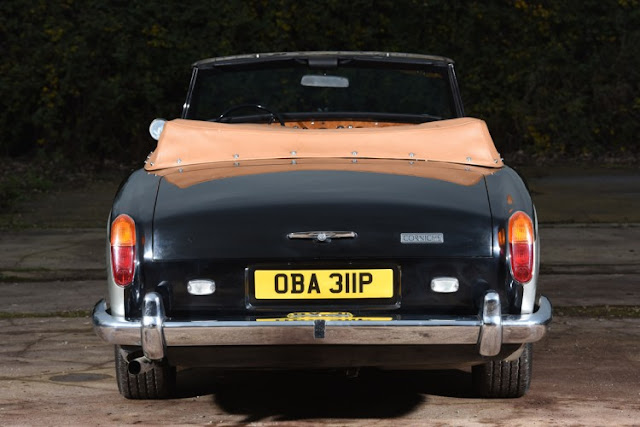 Posted by jeffharris at 12:03 No comments:

The Alfa Romeo 4C caused a sensation when it was revealed in 'concept' form at the Geneva show in 2011. The production version followed soon after, with exactly the same catwalk looks, while power came from a lusty 237bhp version of the 1.75-litre four-cylinder turbo found in the Giulietta Cloverleaf, mated to a six-speed TCT twin-clutch gearbox.  This lightweight, rear wheel drive junior Italian supercar, was designed by Lorenzo Ramaciotti at the Centro Stile Alfa Romeo (Style Centre) and developed by Alfa Romeo. The Concept Car was the recipient of a host of International awards when it was first shown to the World and the production version, which differed little from the concept, was equally féted winning the "Most Beautiful Car of the Year 2013" at the 29th International Automobile Festival in France.
This sensational 2014 Alfa Romeo 4C TBI S-A  was first registered in September 2014 by Guest Alfa Romeo of Willenhall for use by their dealer principal. Presented in stunning '8c Red' with a Black interior, this one owner car has covered just 2,200 miles and is described as being in showroom condition.
Naturally, it was extremely well specified from new and is fitted with air conditioning, reverse sensors, a digital panel and electric windows. This car has recently undergone the manufacturers 'pit stop' upgrades improving the gear change, battery life, and the car's general drivability.
4Cs remain sought after, and finding a stunning, one owner, low mileage car in this colour combination and in this condition is an opportunity not to be missed.

PROUD OF OUR HERITAGE
Est 2010

Posted by jeffharris at 14:37 No comments:

This Jaguar XJ6 is unusual as it features an over-drive equipped manual gearbox where as many examples of Jaguar's iconic first series XJ saloon left the factory with an automatic transmission, and it also has air conditioning (although currently part-removed). It was first registered on August 19th 1969 and there are around fourteen Shell Service Report sheets in the history file from FW Mays of Dorking to a Mr Cummings, approximately covering the years of 1969 to 1975. Also present are a hand book and many expired MOT certificates, roughly from between the years 1978 and 1985. The history file contains a hand-written sales invoice from Graham Bovet-White of The Anchor Inn public house of Barcombe-on-Ouse near Lewes, East Sussex, dated March 1986 which states that Mr Bovet-White sold the car on behalf of his known Jaguar racing father Derek. The buyer (who is believed to have become the third owner) was a Mr Oakeley of Smarden, Kent, who registered the car with his number plate 4 JKO. Sold again in September 2001 to someone in Gillingham, Kent, the car changed hands again to someone in Tonbridge, Kent in August 2011. Finished in silver with red leather interior, the vendor became just the sixth documented owner of this XJ6 when he purchased it in March 2014, and he is keen to emphasise what a superb family classic car it is, proven by his several trips to Ireland on holiday in it with his family. A qualified mechanic, the vendor has removed the air conditioning compressor although left the receiver and condenser in the boot. He also comprehensively refreshed the engine at an approximate claimed cost of £4,500, and is reported to have fitted new pistons and liners, chains, cam shafts, sprockets, and overhauled the cylinder head and fitted a new clutch. Having carried out the work himself there are no labour invoices, but the file does contain many parts invoices and detailed photographs of the work undertaken. Other works during the current ownership include the fitting of a new radiator, fan, and water pump, and the filling of the cooling system with Evans Waterless Coolant. New front sub-frame mounts and new front tyres are also reported to have been fitted, along with the car just (July 2016) passing a new MOT test. The vendor describes the car as having an "excellent" engine and transmission and "very good" bodywork, paintwork, interior trim, and electrical equipment, explaining the reason for the latter only being classed as "very good" is due to one fuel gauge and the rev-counter not working

Posted by jeffharris at 10:04 No comments:

A true piece of Alfa Romeo racing history, a genuine factory Alfa Romeo 156 Touring car. This Alfa Romeo has had a very competitive racing career, winning the Campeonato de Italia de Superproducción in 1999, a recognised race car throughout Europe with great success throughout its racing life.
Built by Fiat Auto Corse to FIA Super Production regulations in 1998, this Alfa Romeo 156 was used to good effect by renowned touring car team Scuderia Bigazzi to win the Campeonato de Italia de Superproducción with Luis Villamil behind the wheel.  Subsequently, it was imported to the UK by GA Motorsports, the team founded by works British and Italian Touring Car Champion, Gary Ayles for use in the British Touring Car Championship. Running in the Super Production Class under the GA Janspeed banner the car was driven in 2001 by Gavin Pyper who gathered great pace, eventually finishing 6th in the championship.
In 2002 the car was entered for the full BTCC season by GA Motorsports for Alan Blencowe who finished 7th in the championship, recording three podium finishes. 2003 saw the GA Motorsports team once again enter the car for a limited campaign in the BTCC, where Chris Ryan scored a victory in the opening round at Mondello Park. Subsequently sold, the car was run in the Britcar Production championship by Brunswick Automotive and was raced in the Nurburgring 24 Hour Race in 2005.
The car is offered in good order with a fresh Brunswick Automotive built 2.0-litre engine featuring steel crankshaft and rods, JE forged pistons and a full race cylinder head. The engine is fitted with Jenvey throttle bodies and runs EFI-Euro 6 engine management together with Magnetti Marelli data logging, all equating to an output of approximately 240 bhp. Constructed from a lightweight shell with a beautifully crafted T45 roll cage, the car is fitted with air jacks, Penske 3-way adjustable dampers, Brembo racing brakes and a Bacci close-ratio dog engagement gearbox complete with LSD.
This car also benefits from fully adjustable suspension for corner weight adjustment with custom anti-roll bars both front and rear. The car is fitted with two forms of brake bias, pedal box and hydraulic, easily adjusted for different driving styles and circuits. The car also benefits from an external fast fuel-fill system and is fitted with air jacks which can be charged from the outside. It has been dry stored as part of a private collection and has not been raced since 2005, however, it did undertake a successful one-hour test session in 2015 but has not been used since except for an occasional run on a private road.
Now eligible for Britcar Production, CSCC Tin Tops, the Alfa Romeo Championship and even perhaps the Historic Production Super Touring Car Championships, the new owner would need to apply for the relevant FIA homologation papers to enjoy the true touring car experience in this exciting and historic car. This car will require some recommissioning work, but it would make a very exciting prospect to add to any Alfa Romeo aficionado's collection, or to return to the circuits to be used as its makers intended.

Posted by jeffharris at 18:54 No comments:

- Reputedly used on a Malaysian IADS airbase from new until 2000 when it was repatriated- Credible but unwarranted recorded mileage of 5,058, Butterscotch upholstery- Malaysian paperwork, UK V5C Registration Document, said to be in 'very good overall' orderVendor Condition Ratings:Bodywork: 'Very Good'Engine: 'Excellent'Electrical Equipment: 'Excellent'Paintwork: 'Very Good'Gearbox: 'Excellent'Interior Trim: 'Excellent'Austin and Morris merged in 1952 to become the British Motor Corporation, which, among many other things, saw the Austin engine powering the Morris Minor from late 1952. The Austin Motor Company's large medium-sized saloon was the A40 Cambridge which became the 1489cc A50 and then, from 1957, the A55. In 1959, of course, it was this Cambridge which was reshaped by Pininfarina to become the Morris Oxford, MG Magnette, Riley 4.68 and Wolseley 15/60 range of badge-engineered models.Offered here is an A50, which was claimed to have been manufactured in Birmingham with right-hand drive in 1956. The vehicle was the property of the IADS (Integrated Air Defence System) in Malaysia and spent most of its life on an air base there. It had been spotted and repatriated by an RAF serviceman Flight Sergeant Stephen Pollitt who was also based in Malaysia.

Posted by jeffharris at 09:27 No comments: