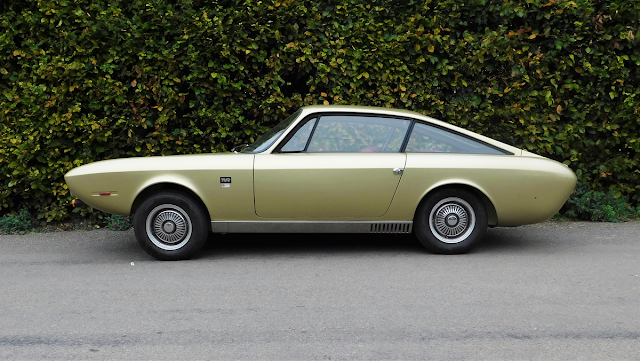 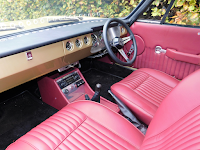 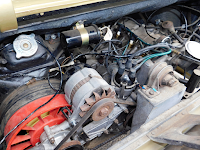 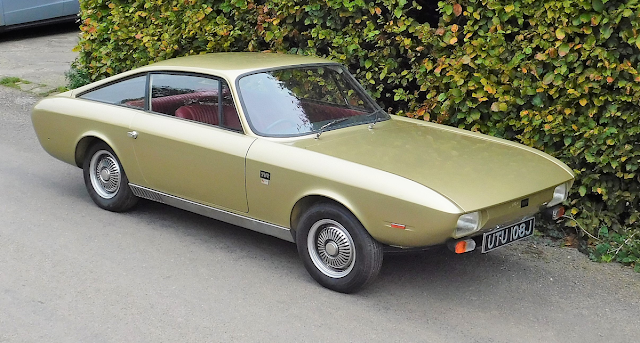 Martin Lilley acquired an ailing TVR in 1965 and set about a rejuvenating the company. Predicting that a more compact and affordable TVR would drive up sales, he sought Trevor Fiore’s services to design a TVR based on the Hillman Imp Sport and the fruits of this collaboration were a pretty coupé and a convertible. Subsequently built in steel by Italian coachbuilder Fissore, the cars were unveiled at the 1966 Turin Motor Show. The new babies were christened Tina after the daughter of the legendary Gerry Marshall (a business associate of Martin Lilley) and the small cars generated considerable interest.
With some modifications made to the coupé, appeasing increasingly safety-conscious Americans (the USA was seen as a potentially important market for TVR) the London Motor Show debut in October 1966 saw the Tina well-received with potential customers proffering blank cheques for an exclusive waiting list addition.
TVR needed a financial partner in order for the project to take off, however, after failed consultations with Rootes, Jenson and Aston Martin the car never went into production and the 2 prototypes faded into obscurity. Furthermore, Gerry himself acquired a rather sad looking coupé in 1989 with the intention of restoring it but with a hugely successful racing career that spanned many decades, time was never found to complete the project. 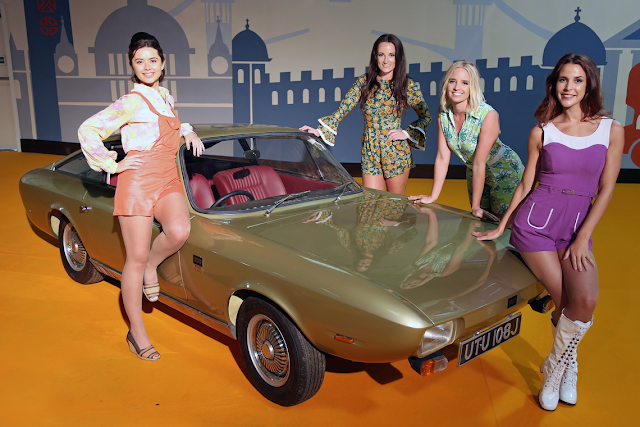 Tina inherited the car in 2005 and set about returning it to the way she remembered it when she had first been shown it by her dad. A mammoth undertaking, with hours spent researching for any information about the car and tracking down period photographs, however, over the last few years Tina, with the help of many people including David Hives, who had a hand in building the car first time round has succeeded in rejuvenating her namesake. Presented in a similar pale gold and red leather trim to its unveiling, and powered by a twin carburettor Imp engine producing around 55 bhp, the TVR Tina is registered and completely road legal.
Those of us old enough to remember TVR's new car launches in the late sixties may recall that pretty girl were always part of the presentation, so it was absolutely fitting that at the launch of the new Griffith at Goodwood a few weeks ago, next to the somewhat macho new TVR, stood the pretty little Tina.

TVR Tina – The Story in Tina 's own words
"Martin Lilley (Barnet Motor Company) bought TVR in the 1960s working with employee and father (Gerry Marshall). Martin’s idea in late 1965 for a small 2+2 convertible with the engine, floorplan, transmission wheel trims and most of the mechanicals based on the Hillman Imp Sport, saw him commission Trevor Fiore to design the all steel body and it was built in Italy by Fissore first shown at the 1966 Turin Motor Show. 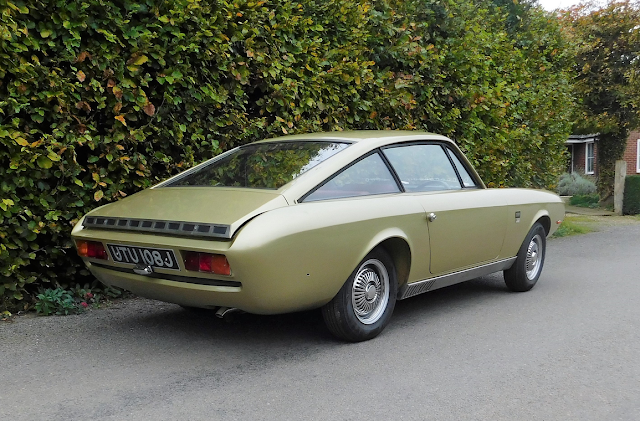 A name was needed urgently and could not be decided, but as Dad was running the Barnet Motor Company and doing very well racing in various TVR's, Martin decided to name the car after me, hence the TVR Tina. The story was always that they got some Ford Cortina badges and chopped the “Cor” off! Also, the name fitted in well with TVR's model range, as at the time the very attractive TVR Trident was the focus and you could see the family resemblance in the two cars.
At the Motor Show, the front of the Tina came under criticism from all corners as it would not have gotten past the American regulations and this really was the target audience to make the car profitable. The Tina went back to Fissore for modification, where it joined its uncompleted fixed-head coupe sister. Martin wanted the convertible and coupé TVR Tinas to appear at the October 1966 London Motor Show, as having them there would show TVR as a company in good health and on the move.
The TVR Tinas were the stars of the show and customers offered to leave blank cheques and after the show, the telephone rang constantly at TVR's factory. There was no way that the TVR factory at Hoo Hill could cope with the production required for such a large market and if it was to be sold for a low price it would have to be produced in quantity and production would need to be outsourced.
Just the coupe was shown at the Turin Motor Show in 1967 and TVR said that production would commence in early 1968, each car priced at £998.00, all taxes included. Rootes, Jensen and Aston Martin were all approached to help with production and Rootes definitely had the capacity, but the Tina would have been an alternative to the Alpine... but this was never brought up and there were other problems. The bodyshell was to be fabricated out of fibreglass and then bonded to the steel Imp subframe and this wasn't practical and a metal body would be too heavy for the planned engine. Jensen was asked next (as experienced bodybuilders) but they doubted that the Tina would sell in the numbers required to be as profitable as it needed to be. If the Tina would become a volume item then the USA would have to be the major market and Jensen felt that the Tina would not go down well in America. Aston Martin was also approached but had its own financial problems and was discounted.
Unfortunately, it was all to no avail and didn't happen. There were various reasons, costs being the main and production capacity another. The Tina never reached production. In some ways, it had served a purpose as a show stealer and shown that TVR as a company was going places. The project had consumed over £15,000."
ORIGINAL SOURCE & LOTS MORE IMAGES
https://www.silverstoneauctions.com/1967-tvr-tina-prototype

Posted by jeffharris at 21:33 No comments: 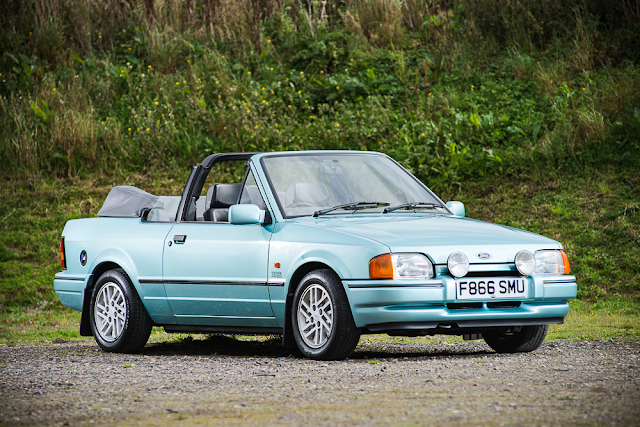 When Ford launched the Escort XR3, the benchmark VW Golf GTi had ruled the hot hatchback market for several years. However, Ford's new offering was a package that combined the looks, performance, and handling demanded by customers in the early eighties. With the introduction of the fuel injected XR3i in 1983, performance was further improved and the XR range captivated a new younger audience who had moved on from the old rear-wheel drive Escorts beloved by their parents. 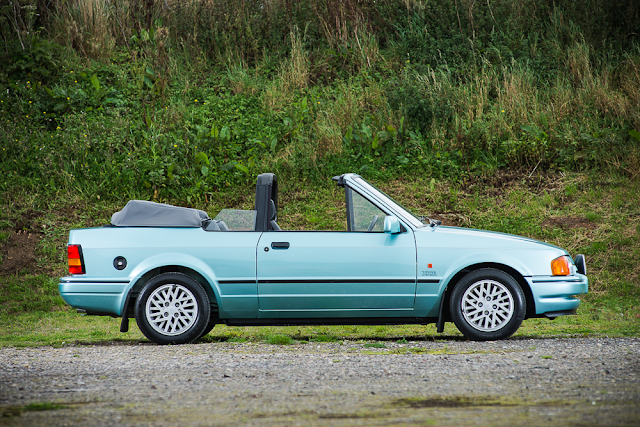 Also introduced in 1983, the Escort Cabriolet in both XR3i and Ghia specifications was Ford of Europe's first convertible since the 1960s. Based around a reinforced monocoque chassis, the convertible was engineered by German coachbuilder Karmann. An elegant and practical design, it featured the same all-round independent suspension, rack and pinion steering and brakes as its more common hatchback siblings. Powered by a fuel-injected 1597cc SOHC four-cylinder engine allied to a five-speed manual transmission, the XR3i Cabriolet was capable of nearly 120mph and became the 'darling' of the 1980s overnight.
This stunning 1989 XR3i is finished in a delightful shade of Aquafoam Metallic with a classic grey interior and is in truly remarkable condition having lived a sheltered life in the care of its one owner from new and having covered just under 11,000 miles in that time. 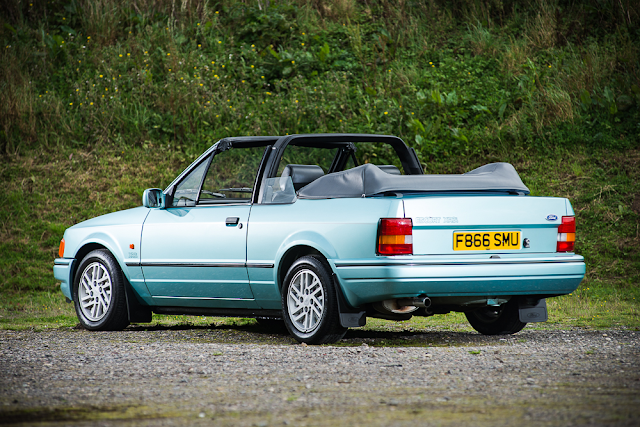 Purchased in January 1989, this sparkling little cabriolet has been its owner's pride and joy ever since and has spent most of its life being admired in his garage. As one would expect the condition of the car is exceptional and appears untouched. It's accompanied by an excellent history file which includes its UK V5C which shows one former keeper despite only being a one owner car due to re-registering the car in his daughter's name in more recent years. Also present are its original factory book pack with the service book showing two stamps, the original sales invoice along with several other invoices and, importantly, a large number of MOTs and SORN records for the car.
Silverstone Auctions has gained a well-deserved reputation for sourcing remarkable cars with low mileage and low ownership, and this delightful XR3i Cabriolet fits the bill perfectly. 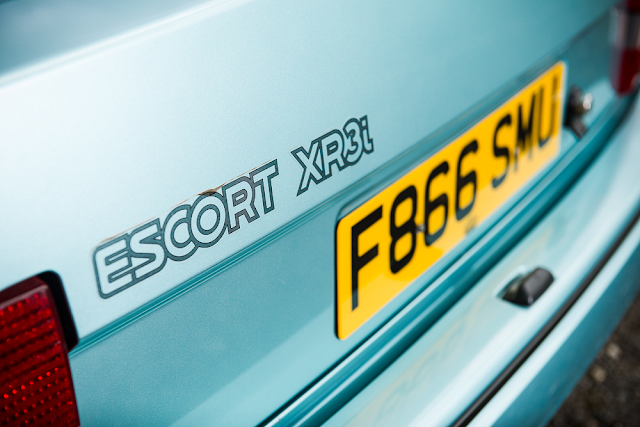 Posted by jeffharris at 20:41 No comments: 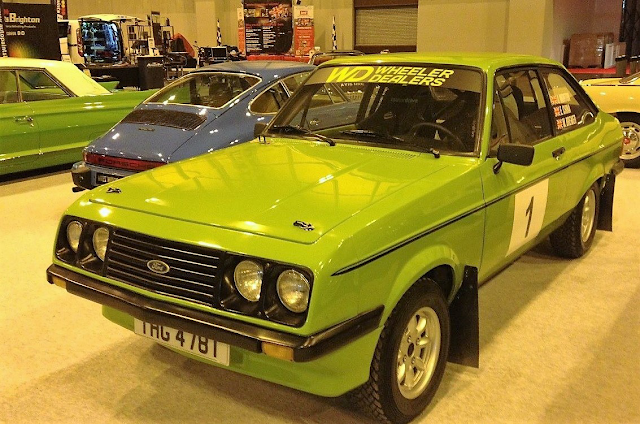 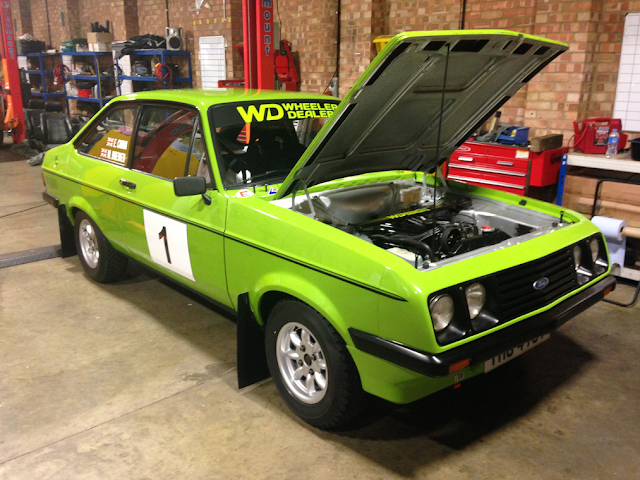 To add a little variety to their show in 2015, Mike Brewer decided he and Ed should create a rally car. Finding an unfinished project developed from a very solid 1978 MK II shell with a 2-litre Pinto engine, the Wheeler Dealers team set about transforming the car into a Ford Escort RS2000 'Evocation' that could compete in rally events. As can be seen from the TV show, aired in September 2015, Mike and Ed have worked their usual magic on the car, making all essential changes for the car to be eligible to compete in rallying events, including a full roll cage, fire extinguisher system, larger capacity fuel tank with braided fuel lines, body strengthening, and a twin electric fuel pump. Much of the work carried out on cars for the TV program ends up on the cutting room floor, so with a list of jobs undertaken off screen too long to list here, the end result is a really well-developed and smartly presented rally car.
Since being purchased from the Wheeler Dealers team, the RS2000 replica has made a few appearances at shows but has yet to be unleashed in anger on a proper rally stage.
Offered for sale with a fresh MOT, an MSA log book and MOTs from its time as a road car, don't miss this opportunity to acquire the Java Green RS2000 'Evocation' and share its celebrity.


NB; This car was first registered in the UK in 2010 in left-hand drive, and was recorded as an insurance theft on the 'condition alert register in 2012. 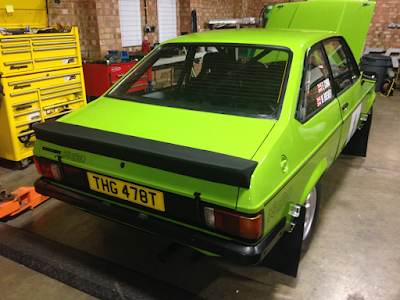 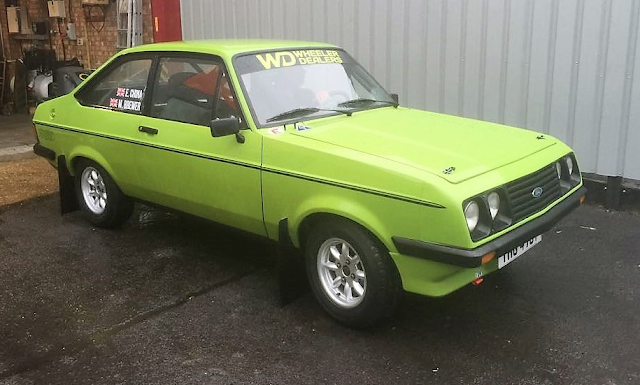 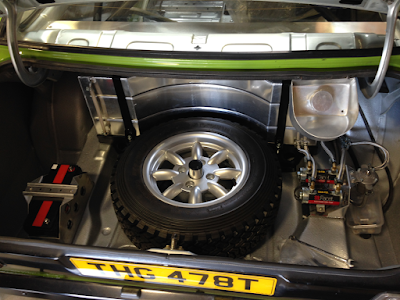 Posted by jeffharris at 12:41 No comments: