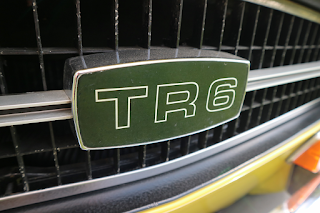 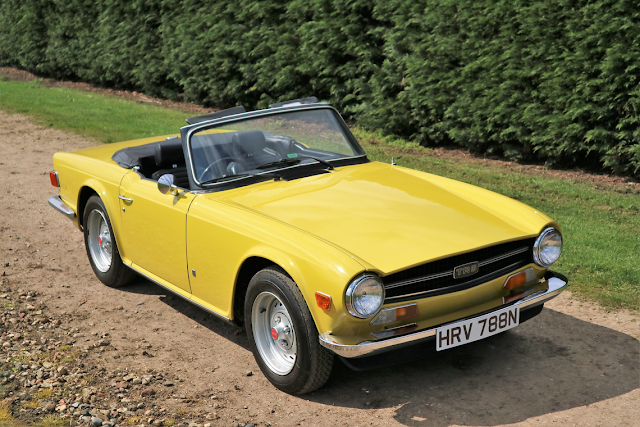 Sharp, clean and ruggedly handsome, the TR6 looked far more modern than TR roadsters of old and proved a huge hit with the sporting driver of the early 1970s. The TR6 was introduced in January 1969 using similar chassis and running gear components to those used in the TR5/TR250. However, the bodywork, while retaining some elements of the TR5/TR250 design, was externally restyled by Karmann.  Apart from smoothing the lines of the car, the design changes also gave the car more boot space.  A front anti-roll bar now formed part of the specification and wider wheels were also fitted making the car look low, lean and very fast - which, of course, it was, courtesy of the TR5/TR250 smooth 6-cylinder inline 2498cc engine.  The '6' was also a little more refined than its predecessors featuring pile carpets, plush-looking bucket seats, a traditional wooden dashboard, and a full complement of instrumentation.

A powerful six-cylinder engine is a reliable unit, whether with UK-market Lucas fuel injection (150bhp) or US-market carburetted (104 bhp) delivery. The UK injected version was de-rated to 125bhp in 1973 by camshaft alterations and revised fuel injection metering. These changes made the TR6 smoother and more flexible, but still ensured it could hit 60mph in just 9.5 seconds and give a top speed of 116mph.

The car presented here is an original home market, UK-supplied, right-hand drive car and, according to its Heritage Certificate, was built on 03/07/74 fitted and finished in Mimosa with a black interior, a colour scheme that it proudly displays to this day.  Factory fitted equipment is listed as overdrive, seatbelts, black tonneau cover, and 165x15 Michelin XAS tyres. It was dispatched to the Bolton Motor Company Ltd on 10/04/74 but remained unregistered until the 08/05/75 when Hollingdrake Ltd, Triumph Distributors in Bolton, did the honours and the car was allocated the registration number HTD 583N. It found its first 'keeper' on 30/08/75 in Hoghton near Preston and he was to use the TR for just less than two years before selling it on 09/07/77 to Joseph Murphy of East Didsbury. Mr Murphy changed the registration to JM40 and enjoyed the little yellow Triumph for nearly 28 years before he sadly passed away in early 2006. Formal ownership then passed to his widow Mrs Kathleen Murphy on the 08/03/06, re-registered as HRV 788N, however, she had no need of the TR and entrusted it to Bonhams who, on 30/04/07 sold it at their RAF Hendon Auction for £10,500. A note was made of its recorded mileage of 13,425 miles at the time.

The TR6's low mileage and great condition attracted interest in the classic car world and Classic Car magazine chose the car to feature in an article which was published in December 2008. They wrote “There are plenty of restored TR6s around, but very few good, original cars such as the Mimosa Yellow example featured here. It's a Seventies time warp with 13,000 miles on the clock, original paint, great panel fit and factory welds everywhere."

No change of ownership was recorded until 23/03/09 when it was registered to a Michael Payne, CEO of the internationally famous Monaco yacht brokerage, Camper and Nicholsons, and was subsequently re-registered in Monaco as X557. There are numerous receipts from the TR's time swanning around the streets of Monte Carlo including one from leading Triumph TR specialists Enginuity for £3,700 dated 05/05/09. It's been fitted with a full stainless-steel exhaust and, although the injection system has been modified for unleaded, the cylinder head has not been off the engine.

The car’s previous owner purchased it on the 28/11/15 and completed the re-registration back into the UK on 07/01/16. There is a decent amount of history in the owner's file and he noted: “Although it shows eight owners, four of those related to Joseph Murphy as he registered it to his business and back to himself before it passed to his widow.”  Having bought the TR he notes “I collected it and took it straight to marque-specialists Enginuity for a no-expense-spared inspection. The only major expense was a new clutch (receipt for £1,800 included) and they recognised the car, commented on its originality and the pleasure of working on such an original car. I also had the low-profile tyres replaced with the original, period specification, 165x15 Michelin XAS tyres (receipt for 770 Euros included). It’s been back to Enginuity annually but has required nothing more than a petrol pump hose replacing”.

Our vendor, who is a private collector of special cars, purchased the car only last year but sadly, due to unforeseen circumstances, he must now thin-out his assortment.  The TR6 is now for sale and will be supplied with its original hardtop, hood, hood cover and tonneau. As well as the usual registration documents, invoices, old MOTs etc., the owner's file also includes the BMT Heritage Certificate, the original passport to service, handbook, and Triumph sales and service Directory. The indicated low mileage, supported by much documentation, is now 19,798 which is great as it's low enough to be remarkable but not so low that you have to think twice before using the car.

Without doubt one of the very best TR6s we have seen and with warranted mileage, this example really needs to be seen to be appreciated. 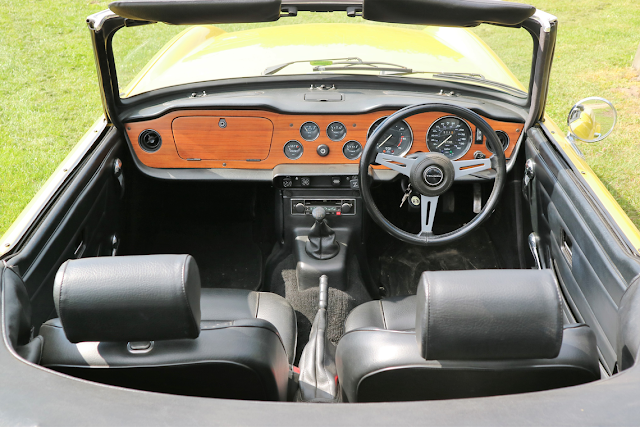 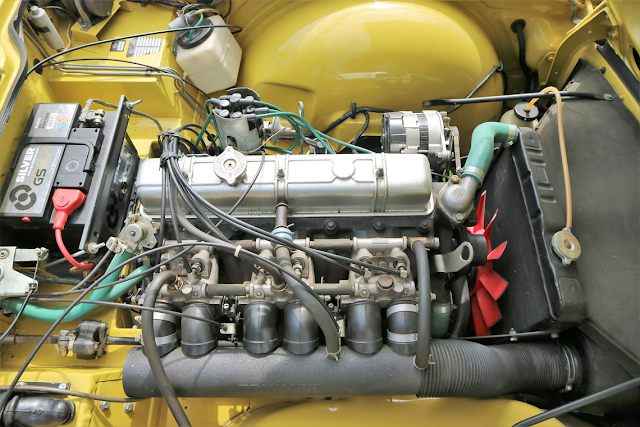 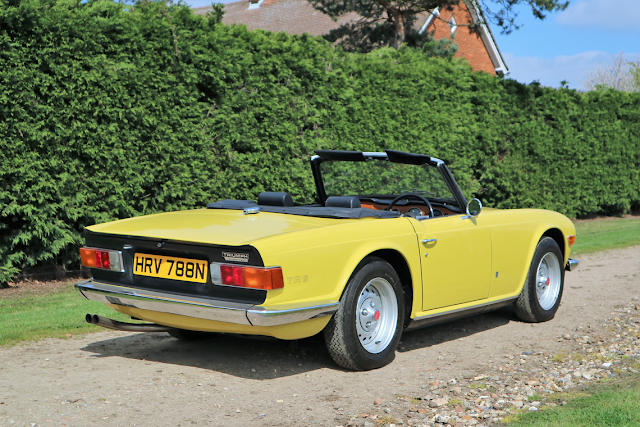 CLASSIC CHATTER
Powered by Dragons
Posted by jeffharris at 10:30