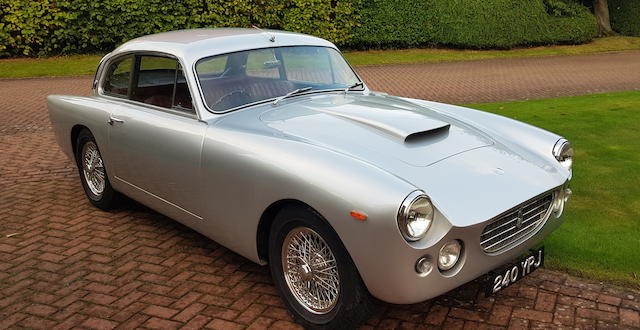 1962 AC GREYHOUND BRISTOL
Registration no. 240 YPJ
Chassis no. BEF2566
*Restored by specialist 20 years ago and re-painted this year

While the pre-Cobra AC Ace remains overshadowed by its more powerful successor, another AC – one from the same period with true grand touring capabilities – also brought together two great British car-making names in one attractive package. Step forward the AC Greyhound, whose manufacturer looked to Bristol to supply engines. The result was a rapid, well-engineered not to say good-looking offering. Restored around 20 years ago by noted Bristol specialist Spencer Lane-Jones (over 570 hours!), this UK-supplied Greyhound has a comprehensive history and has received much attention more recently. It is fitted with the Bristol 2.2-litre inline six, the engine which experts say best suits the Greyhound's character, and is coupled to a Bristol (overdrive) gearbox. Following on from the restoration, more recently (2019) it has been re-painted in Aston Martin Dunhill Silver, a shade that complements the body's lines, while the lack of bumpers lends a more purposeful air and evoking images of when these models were used in rallies. Ideally suiting the silver bodywork is a red interior, which is in wonderfully, lightly patinated order with no signs of modification, and remains eminently usable. At the wooden dashboard is especially appealing with its full complement of instruments, below which sits a period radio. At the heart of any Greyhound is the engine, and this car was re-built to almost 100S specification (which translates into around 125bhp) and is said to be very good. Running gear too is in good order, other than the brakes which could benefit from some attention. Adding to this car's appeal is its immense history, which runs to two box files and includes the original 1960 buff logbook, as well as photographs and notes taken during the restoration work.

CLASSIC CHATTER
Powered by Dragons#
Posted by jeffharris at 16:20