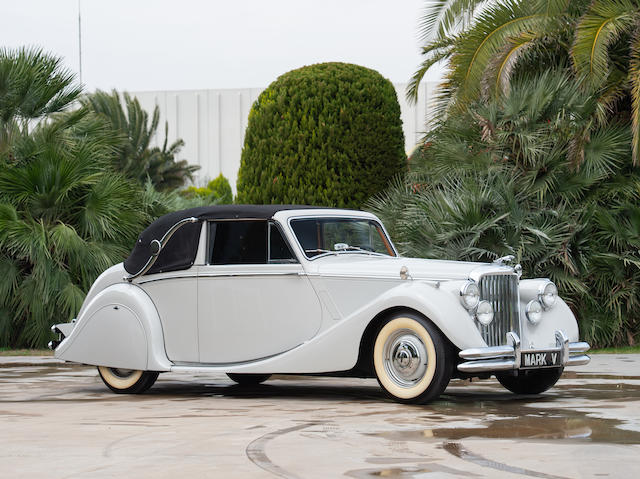 Everything about it, the feel of it, the way it goes, the way it sounds and the way it looks has distinction. Its engine is as docile in city streets as it is fast on the open road... I particularly liked the new steering which is light, positive, self-centring and free from road shocks. It corners like a racing car yet the springing with extra-long torsion bars for the independent front suspension gives a delightfully smooth ride.' – Courtenay Edwards, writing about the new Jaguar Mark V in the Daily Mail.

Jaguar Cars - as William Lyons' SS concern had been re-named in 1945 - commenced post-war production with a range of essentially pre-war designs while at the same time developing what would become known as the Mark V. A considerable improvement on what had gone before, the Mark V saloon's cruciform-braced chassis featured torsion bar independent front suspension, designed pre-war by the company's Chief Engineer William Heynes, and all-round hydraulic brakes. Jaguar's existing Standard-based, six-cylinder, overhead-valve engine was continued in both 2½- and 3½-litre forms in the Mark V, whose bodywork likewise maintained the pre-war tradition, though with minor up-dating in the form of faired-in headlamps, deeper bumpers, and rear-wheel spats. Like its immediate predecessor, the Mark V was available in saloon or drophead coupé versions and featured the kind of luxuriously appointed interior that had become a Jaguar hallmark. The announcement of Jaguar's first new generation post-war saloon - the Mark VII - at the 1950 Motor show signalled the end for the Mark V, production ceasing in June 1951 after slightly fewer than 10,500 had been built, only 1,005 of which were dropheads like that offered here.

Little is known about this left-hand-drive 3½-litre Mark V but it is recorded that it was owned by one Frank Weigel in 1981 and had been, prior to the preceding owner's acquisition, with the same keeper for the previous 15 years. The Key Collection purchased the car at Bonhams' Scottsdale Sale in January 2012 (Lot 345), since when it has been restored by them. Mark V dropheads have been gaining in popularity recently and for good reason, as these beautiful cars epitomise Jaguar's traditional virtues of grace, space and pace.

Should the vehicle remain in the UK, local import taxes of 5% will be added to the hammer price. 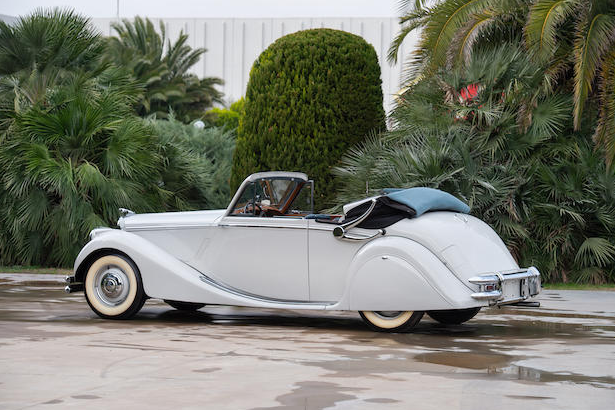