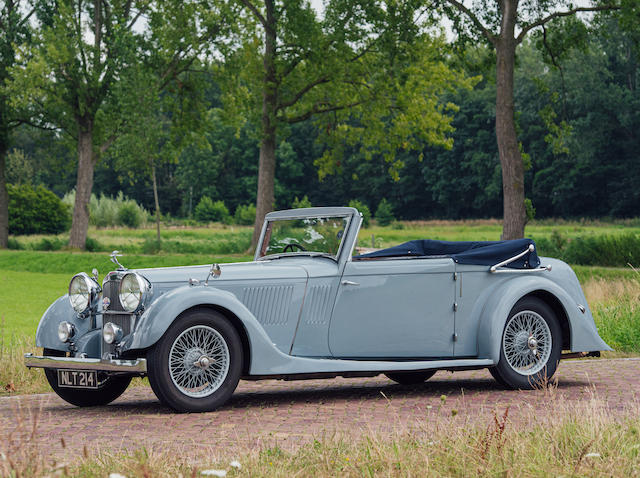 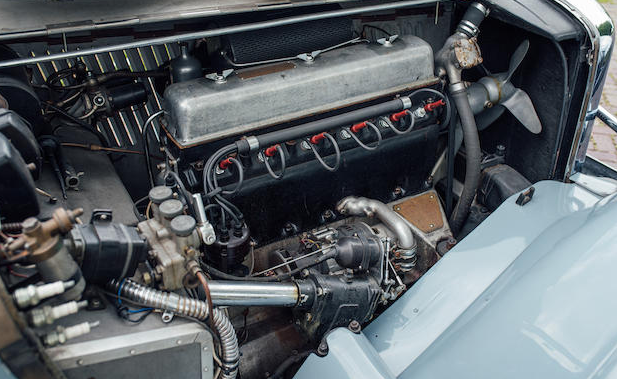 'In the scheme of things, there are cars, good cars and supercars. When a machine can be put into the last of these three categories and yet is not by any means in the highest-price class, considerable praise is due to the makers. The model in question is the latest Alvis 4.3-litre sports tourer.' – The Autocar, August 1938.
Pre-war development of the six-cylinder Alvis culminated in the announcement in August 1936 of the 4.3-Litre, designed by the company's distinguished Chief Engineer, Captain George Smith-Clarke. The 4.3-Litre was based on the 3½-litre Speed 25 introduced the previous year and was powered by an enlarged version of Alvis' new seven-bearing, overhead-valve engine producing 137bhp on triple carburettors. The cruciform-braced chassis featured the kind of advanced thinking long associated with the marque; independent front suspension and a four-speed, all-synchromesh gearbox, introduced on the preceding Speed Twenty, were retained with the additional refinements of driver-controlled Luvax hydraulic dampers and servo-assisted brakes.
Claimed to be the fastest un-supercharged saloon on the UK market, the Alvis 4.3-Litre was certainly one of the few pre-war saloons capable of a genuine 100mph. Sturdily built and endowed with a generous wheelbase, the Alvis six attracted some of the finest examples of the pre-war coachbuilders' art, though the 4.3-Litre's chassis-only price of £750 meant that ownership was necessarily confined to wealthy connoisseurs. A complete 4.3-Litre cost around £1,100, outstanding value for money given its specification and performance, and comfortably undercutting rivals such as the V12 Lagonda and 4¼-Litre Bentley. Despite this price advantage, only 198 cars had been delivered when the outbreak of World War 2 stopped production. Some 95 survivors are known to the Alvis Owners' Club.
Alvis Ltd's records show that chassis number '13182' was constructed on the short (10' 4") wheelbase and bodied by Vanden Plas as a three-position drophead coupé to design number '1430'. Records indicate that '13182' was the first 4.3 built on the short chassis. Only 39 of this model were bodied by Vanden Plas, of which only five were drophead coupés. '13182' is the only example with this particular style of coachwork, requested by the first owner. Note the 'helmet' wings and spare wheel in the boot lid - it is the only 4.3 with this design.
The car was despatched in chassis-only form to Messrs Follett Ltd of London on 2nd December 1936, with the guarantee issued on 11th February 1937 to John James Joass of Putney Hill, Southwest London, its original owner. Very little else is known until 1954 when US serviceman Ken Crawford acquired the car, by which time it had been registered as 'NLT 214' (original registration unknown). Although in a neglected state, the Alvis ran well and after a few months touring the UK, Ken took the car back to the USA. It was then owned by Philip Steen and Harry Van Lier, and in 1957 was bought by one George Abernathy. He had it repainted by State Road Motors of Media, Pennsylvania, and sometime later the car was returned to State Road Motors for further repair work. For some extraordinary reason, it was never collected. Then George died and his widow did not want to pay the storage charges, so the Alvis was put in a yard at the rear of State Road Motors' premises. By 1964 the garage owner had sold his property for redevelopment and the demolition contractors were about to move in. The Alvis was destined for scrap until enthusiast Wayne Brooks, hearing of its plight, managed to rescue the car with just hours to spare. Wayne kept '13182', un-restored, for the next 25 years until it next changed hands, passing to Alan Stote in April 1989.
Shipped back to the UK, the Alvis has since undergone a complete restoration with all new ash framing but retaining the original aluminium panels. All the mechanicals were overhauled, including the engine, which was rebuilt and balanced. Every care was taken not to 'over restore' this rare and original car, which on completion was advertised for sale in The Automobile magazine in May 1996. The car was sold shortly thereafter to Mr Maitland Woods of Shropshire. The current V5C Registration Certificate records the previous owner as Mr Robert Frost, who acquired the Alvis in October 2003. The car has been registered to the current owner since May 2008.
'NLT 214' is offered with the following documentation:
Copies of Alvis Owners' Club records
Numerous old UK tax discs and MoTs
Old US Pennsylvania title
Photographs from the 1950s and 1960s
Old restoration photographs
Correspondence from the 1980s and 1990s
2005 '4.3-Litre Register' leaflet featuring this car on the cover
Taxation report dated October 2018 confirming the car's condition (valuing it at €270,000)
Copy of a feature on the Alvis 4.3 in The Motor Rationalised Road Tests, 1936
Red Triangle dynamometer printout dated 2006.
Multiple invoices from Alvis specialists Red Triangle, and Fisher Restoration.
A wonderful opportunity to acquire one of the fastest production cars of its era and the very embodiment of the term, 'Post-Vintage Thoroughbred'. 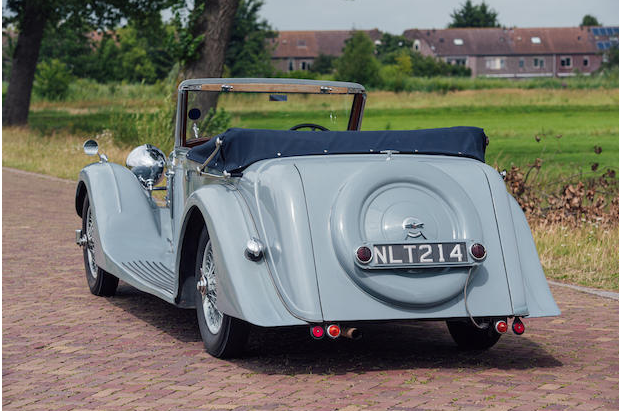