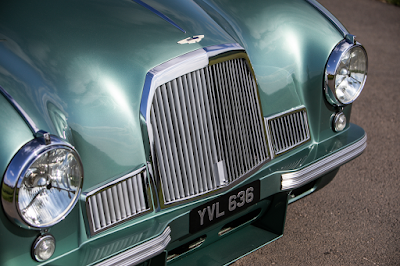 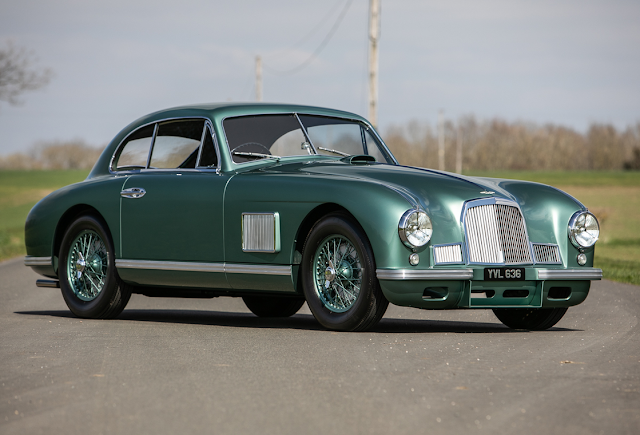 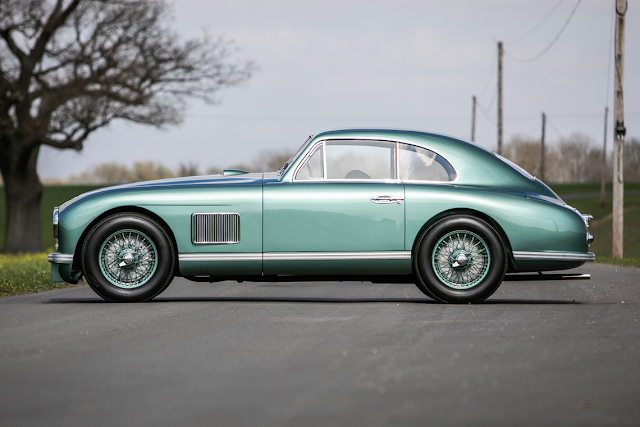 Making its debut at Le Mans in 1949, well before road versions hit the streets, the first DB2s were fully-fledged competition cars. The model was made possible by David Brown’s purchase of Aston Martin and Lagonda in 1947 guaranteeing the availability of Lagonda’s superb twin-cam, six-cylinder engine – a WO Bentley creation – which when mated to a shortened AM ‘2-litre Sport’ chassis and clothed in Frank Freely's distinctive sports-tourer bodywork resulted in the era-defining DB2.

The earliest DB2s to fly from the factory floor featured a three-part grille and a substantial slatted vent behind each front wheel which gave rise to the “Washboard” nickname which is still how the early cars are referred to and even the current register of the three-grille cars is entitled 'The Washboard Register'. After an initial run of 49 cars, the design was simplified and thereafter the side vent was deleted and the three-piece grille replaced by a single unit.
To quote Frank Feeley, responsible for the DB2 design, in Aston Martin Magazine:

“Anyway, eventually we tidied up the DB2 and got it into production by which time quite a few changes had been made. For example, we had these outlet grilles on each side of the bonnet behind the front wheels. But Lawrence Pomeroy of The Motor said to David Brown that they were awful and looked like washboards. He had a lot of influence with him and persuaded David Brown to do away with them. So we had to drop them but I personally always thought they looked rather nice, and I was rather upset when they were done away with.
Another change we made later was to the grille which started off as a three-piece design. This change came about through James Watt who said can’t we save some cost by making it one piece. So I redesigned it to the shape which has become almost a trademark. The grille itself was made of horizontal slots on a very light frame which was just pushed up behind the panel work to fill the big “window”. I don’t really think it was an improvement but we had to save costs somewhere. I preferred the first design actually.”

LML/50/16 was the sixth production DB2 and the first, we understand, to be fitted with a floor mounted gear change. According to its BMI Heritage Certificate, it was finished in Polychromatic Almond Green with a beige interior (the same colour as the three 'works' cars at Le Mans in 1949) and fitted with a Smiths heater and a Smiths 'Bijou' cigar lighter. It was signed off by the factory on the 1st October 1950 and the following day set off on its long journey to Melbourne, Australia where Aston Martin agents, Brown and Dureau, had a customer waiting. After the import, documentation had been completed and the car prepared for sale, it was duly registered XPG 833 and delivered to its first owner, a Mr WH (Tony) Luxton of Dundenory, Victoria on the 14/12/50 just in time for Christmas.

Tony Luxton obviously enjoyed a bit of competitive motoring and there are written records and photographs of the car competing in The Victorian Trophy in November 1951 at Ballarat Airfield, the Rob Roy hill climb on 29/01/51 (demonstration run) and the Argus Cup on 18/03/56 where it placed 15th. Within the history, files are a copy of  Australian Motor Sports magazine and various photographs results sheets etc. Also within that file is some limited service information confirming that at various times between March 1951 and June 1953, Brown and Dureau carried out work to the Aston including N/S rear shock absorber, 2 front springs, broken push rod, windscreen wiper repair, water temperature gauge, and sundry oil leaks.

Now registered as VIC 420, the car's second owner was a Mr P Thornley from South Yarra, Victoria and subsequently a GJ Moulden until around 1991. From there the trail goes cold until 2003 when LML/50/16 appeared in an advert by Brooklands Motors of Sandringham, Victoria offering the car for sale “disassembled and ready for restoration” with an asking price of $29,950.
It's at this point that Max Hobson enters the frame. A leading light in the Melbourne Mille (South Australia's version of the legendary Mille Miglia) he appears to have purchased the DB2 as a pile of bits in late 2003. In the file there are dozens of emails, starting from early in January 2004 through to the middle of 2007 asking for advice about the Aston Martin jigsaw that he now owned. Patently a wise man, the majority of this correspondence relates to seeking guidance about the potential pitfalls of fully rebuilding the complicated LB6B engine, and the emails and subsequent invoices embrace a veritable 'Who's-Who' of early Aston restoration – Aston Service, Colin Thew, Tim Stamper, Chris Woodgate and others. Max entrusted The Healey Factory in Melbourne, sports car specialists with a reputation for Concours-quality restorations, with the return of the Aston to the road and in an email to Tim Stamper dated 24/06/2004 it appeared that work had been started, was going well, and they were now seeking quotes for a crankshaft, conrods, cams, pistons etc. However, perhaps time and other pressures got in the way as the file contains a much later letter from Chris Woodgate (Rex J Woodgate) dated December 2006 quoting prices and availability for the same items. Whatever slowed the project down is not important as it's obvious from the invoices and correspondence that Max Hobson was determined to finish the project with the best possible parts and no expense spared on the car's preparation. The Healey Factory kept a digital record (over 100 images) of their restoration and any potential purchaser would benefit from some time looking at these images and the relevant cache of invoices to fully comprehend these years in the DB2's life. The final set of photographs show a magnificently restored LML/50/16, now registered DB 016, on the 14/06/09 at the Mornington Rally in Victoria.

The car's next owner was one Vern Schuppan, the talented South Australian racing driver who enjoyed success at every level of the sport. After the traditional start in Karting, he graduated through Formula Ford and Formula Atlantic all the way to Formula 1, driving for BRM, Ensign, Embassy-Hill, and finally Surtees, however, success lay elsewhere, mainly in Sports Cars and Sports-Prototypes driving for Rothmans Porsche and winning at Le Mans in 1983. He was no slouch in other categories either, doing well in F5000 and winning 'Rookie of the Year' at the Indy 500.
He appears to have bought the car in late 2009 as there is an invoice in the file from Ozishield for $500 for a 'paint protection film kit for a DB2' as he planned to drive his Concours Aston all the way back home to Adelaide and wanted to protect his investment. The drive home highlighted certain issues, as an email to Tim Stamper illustrates, with Vern expressing displeasure about the steering box, shocks and springs. Over the next few weeks, various solutions to the car's steering/handling problems were discussed and eventually Marque Restoration of Kilkenny, S.A. was tasked with taking the suspension, brakes and steering apart and rebuilding them correctly. Mr Schuppan was obviously rather fastidious and Marque Restoration equally fussy as over the next few months a considerable amount of the previous recent restoration was found to be not of the required standard. Invoices in the file detail a serious amount of work by Marque Restoration to the tune of $50-60,000 including taking the car back to bare metal, re-fitting the doors and bonnet, removing the filler, reshaping panels, fully repainting the car (again) and dealing with a number of small mechanical issues. In fairness, there is no mention of any work to the engine, chassis or trim which presumably met the required standards. A disc containing over 240 images of the remedial work by Marque Restoration is included in the file and, once again, any potential purchaser needs to have a look at this and the appropriate invoices to help appreciate just why this is almost certainly the best DB2 in the world. The final invoice in the file from Marque Restorations is dated 14/11/11 so presumably, the car was finished by then.  As far as we can tell, the Aston remained in Vern Schuppan's possession until late 2013.

LML/50/16 returned home to the UK at some point in late 2013/2014 and was registered to JD Classics as YVL 636 on 06/08/2014 becoming part of their stock of important cars. On 28/04/15 it was purchased by our vendor who is based in the Far East and whose intention was to enter the world-famous Pebble Beach Concours d'Elegance that year with a competitive car. Although the Aston was a Concours winner in the hands of Vern Schuppan, some four years had passed and whilst the car remained in fabulous condition, Pebble Beach was a different matter. JD Classics had a great record of success in, what is effectively the most significant Concours d'Elegance in the world, and they were asked by our vendor to bring the car up to the unbelievable standard required, secure entry, and get the car there. Their efforts evidently paid off and, on 16/08/15, LML/50/16, now displaying the registration JG6, was rewarded with Third Place in Class O-1- Postwar Early. Having lived a cossetted life since and remaining in its Pebble Beach condition, our vendor is now offering the Aston for sale with its splendid history file.

This venerable world-traveller has certainly lived a life and could tell some tales, however after a few years of peace and quiet, is probably ready for the next adventure. We feel certain that this is the best DB2 in the world and welcome serious enquiries. 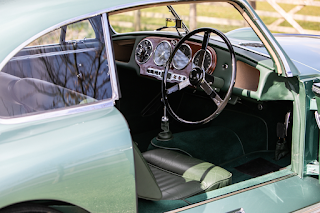 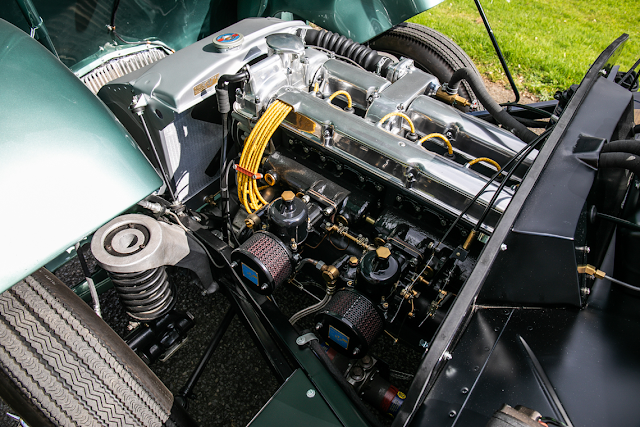 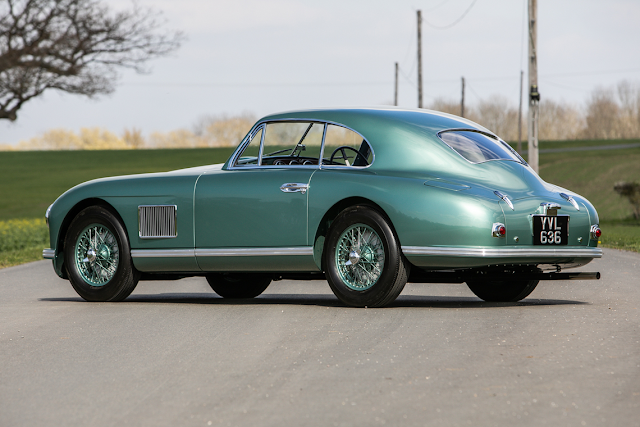 CLASSIC CHATTER
Powered by Dragons
Posted by jeffharris at 16:57