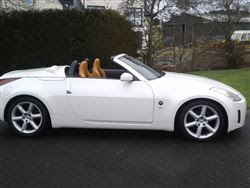 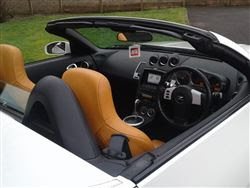 The Nissan 350Z, known as Nissan Fairlady Z in Japan, is a two-door, two-seater sports car that was manufactured by Nissan Motors from 2002 to 2009 and marks the fifth generation of Nissan's Z-car line. The 350Z entered production in late 2002 and was sold and marketed as a 2003 model. The first year there was only a coupe, as the roadster did not debut until the following year. Initially, the coupe came in Base, Enthusiast, Performance, Touring and Track versions, while the Roadster was limited to Enthusiast and Touring trim levels. The Track trim came with lightweight wheels and Brembo brakes, but its suspension tuning was the same as all other coupes. The Nissan 350Z has been succeeded by the 370Z since the 2009 model year.

This example was registered in the UK in December 2007, it has had four former keepers. The car is said to be a very clean car inside and out, with alloy wheels, and is presented in Pearlescent White with a Black Electric Hood. The automatic gearbox has a manual option, as well as both a sport and snow buttons. The car also has sat nav with a reversing camera and the seats are electric and heated. This car is great fun and puts a smile on your face when driving.

The car comes with its import certificate, old MOTs, a couple of old bills, and a Service Book with Japanese stamps. The vendor has owned this car for just over 6 months and is selling as he is building a new house. 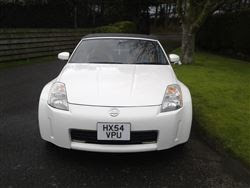 CLASSIC CHATTER
Powered by Dragons
Posted by jeffharris at 16:21