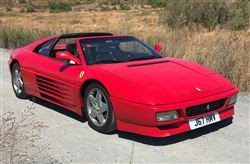 The Ferrari 348, badged 348 TB for the coupé (Transversale Berlinetta), 348 TS (Transversale Spider) and the 348 SP (Spider, or Convertible) versions, featured a naturally aspirated 3.4-litre version of the quad-cam, four-valve-per-cylinder V8 engine. As with its predecessors, the model number was derived from this configuration, with the first two digits being the displacement of the engine and the third being the number of cylinders. The engine, which had a power output of 310 PS (228 kW; 306 hp), was mounted longitudinally and coupled to a transverse manual gearbox, like the Mondial T with which the 348 shared many components. The "T" in the model name 348 TB and TS refers to the transverse position of the gearbox. Overall, 2,895 examples of the 348 TB and 4,230 of the 348 TS were produced. The 348's styling differed from previous models with straked side air intakes and rectangular taillights resembling the Testarossa, stylistic themes reminiscent of the F40, the world’s fastest production car at the time, and other prestigious Ferrari models of the past. The model was also the final design overseen by chief stylist Leonardo Fioravanti, known for such designs as the F40, Daytona, 512 Berlinetta Boxer, 288 GTO P5, P6 and others. The F355 that succeeded the 348 returned to the styling cues of the 328 with round tail lights and rounded side air scoops

This 348 TS is presented in Rosso red with contrasting Nero black full leather interior. The car is original throughout, and the leather is in immaculate condition. The vendor states that the car has good Ferrari service history, and comes with 2 sets of keys. The car is LHD and has only covered 25,000 miles from new. This car is a very nice example in excellent condition all round. 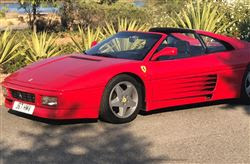 CLASSIC CHATTER
Powered by Dragons
Posted by jeffharris at 15:55