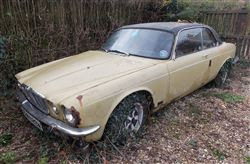 1973 JAGUAR XJ SERIES 2 (PRE-PRODUCTION)
RESTORATION PROJECT
Chassis No: 2J50002DN
Registration No: RRW 629M
TO BE SOLD AT NO RESERVE

The XJ line was updated in 1973. The 4.2 XJ6 and the 5.3 XJ12 were continued with a 3.4 lt version available from 1975. In 1974 Jaguar announced the withdrawal of the standard wheelbase version, and subsequent cars featured the extra 4 inches of passenger cabin length. Finally, in 1975 the first deliveries of the two-door shorter wheelbase Coupe started, which had already been formally launched more than a year earlier.

Visually, Series II cars are differentiated from their predecessors by raised front bumpers, a smaller grille, complemented by a discreet additional inlet directly below the bumper. The interior received a substantial update, and in May 1977, it was announced that the General Motors three-speed THM 400 would be used in the XJ12.

An extremely rare 1973 Pre Production Jaguar XJ 4,2 Coupe Manual, 1 of 9 cars built in 1973, (there were none built in 1974). Chassis number two left-hand drive, but converted by the factory to right-hand drive, and registered to the Browns Lane factory in March 1974, with the Coventry registration number RRW 629M. Used by Jim Randle (company Chief Engineer) as his company car. It is a rare matching numbers, factory manual 4.2 litre car, that is not only a pre-production car, factory registered, and factory used, but was also subsequently owned by Thoroughbred and Classic Car magazine driven by BTCC Dolomite Sprint racing driver Roger Bell, and was featured in numerous articles over several years in the Eighties. Recently found in a garden and in need of a full restoration. This car has huge potential and is of significant interest, which deserves to be brought back into use.

We have the Heritage Certificate showing all the factory details mentioned above and copies of some of the magazine articles. 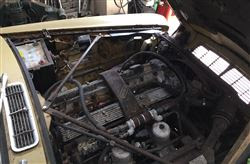 CLASSIC CHATTER
Powered by Dragons
Posted by jeffharris at 18:17