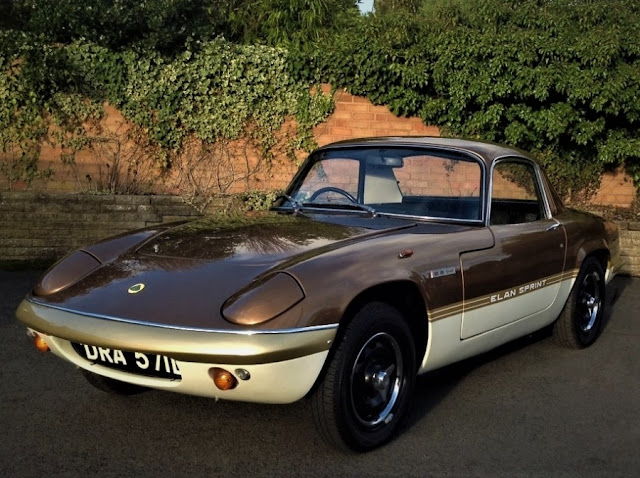 The 1971 Elan Sprint was essentially based on the Series 4 Elan bodyshell and was primarily designed to rekindle demand and improve the performance of the nine-year-old sports car. Conceived by Lotus Sales Director, Graham Arnold, the Sprint's most notable feature was the horizontally-split two-tone paintwork echoing the livery of the Gold Leaf Team Lotus Formula 1 cars. Meanwhile providing the 'go, to match the show' a new big-valve cylinder head with high-lift cams and a raised compression ratio, the work of Engineering Director Tony Rudd, provided a 25% increase in power to 126bhp. The drivetrain was suitably toughened and braced and the front callipers were redesigned to cope with the increased performance.
The car presented here is a genuine home-market FHC Sprint model that was first registered in 1972 and is particularly striking in the more rarely seen Sprint livery of Tawny Metallic over Cirrus White. Supplied new by Lotus dealer J A Else & Son, it's one of the last registered Elan Sprints and has been confirmed by Lotus as the 59th from the last Sprint ever built. It's simply beautiful with correct matching numbers and has been lovingly and meticulously restored which included a new genuine galvanised Lotus chassis. The bodywork was taken back to the gel coat and great attention was given to achieving perfect panel alignment, particularly the doors before it was superbly repainted in its original colours. In 2015, the engine was overhauled and balanced and the cylinder head was converted to run on unleaded petrol. With a few notable exceptions such as an upgrade to an alternator and a deep core radiator, the Elan retains its factory originality and is possibly one of the finest examples on the market today.  It's supplied with a fantastic service history dating back to the Elan’s first free service back in September 1973 when the car had done 564 miles and there are 30 older MOT Certificates including the very first one from March 1976. The comprehensive history file contains the original handbook, numerous invoices, old tax discs and photographs.
There is no doubt that DRA 571L has received more than its share of care and attention and continues to look crisp and fresh. We understand that it's as agile and eager as a Sprint should be and imagine that Mr Chapman, whose signature is etched into the steering wheel, would be proud that his inspired creation is as desirable now as the day it rolled out of Hethel all those years ago.

CLASSIC CHATTER
Powered By Dragons
Posted by jeffharris at 15:51