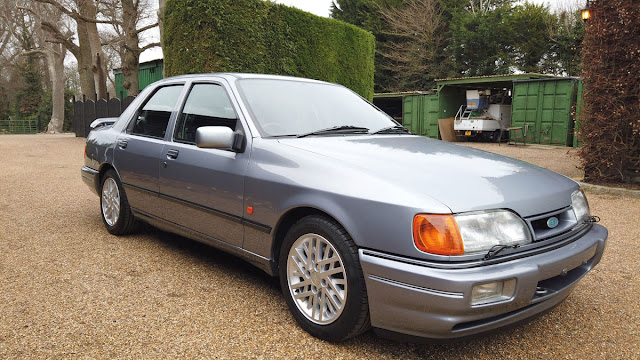 
The Sapphire Cosworth, being based on a different shell to the original three-door Cosworth, along with its more discreet rear wing, recorded a drag co-efficient of 0.33, thus allowing it to register slightly better performance figures (top speed of 150 mph and 0-60 of 6.1 seconds) compared to the original Cosworth.
Unlike its earlier two-door (Tea tray) cousin, the Ford Sierra Sapphire Cosworth was one of the great wolves in sheep’s clothing of the modern era.
No further punctuation at this point can be made that in actual fact the Sapphire was actually a quicker and higher performance car than the earlier three-door “tea tray express”, and much more of a gentleman’s performance machine, being less obvious and more discreet – but again with greater performance.
This particular Sapphire Cosworth is of particular note, as it is entirely authentic and original, and with two private owners from new and a full-service history from new, documenting its very meagre 49,000 miles.
These super-saloons were prevalent during the 1990s, whether it be the BMW M5 or the Lotus Carlton. Through racing, modification and daily use, few remain on the road today. This example remains pure, unaffected, with original paint and interior, exactly as it has always been, which is now a key touchstone for collectors of cars of this period, as so few exist so unmolested and so genuine. The car even retains its original Dunlop D40 spare tyre and is fitted with full black leather interior, which was a very expensive option at the time.
With the youngtimer market being so popular, and enthusiasm for cars of this period growing on an annual basis, this is a car that must be noticed, as it stands head and shoulders above its peers.
Estimate: £26,000 – £28,000
€29,000 €31,000
$31,000 – $34,000

SOURCE: https://www.coys.co.uk/cars/1990-ford-sierra-sapphire-cosworth
SELECTED BY THE SQUIRREL

CLASSIC CHATTER
Powered By Dragons
Posted by jeffharris at 12:06