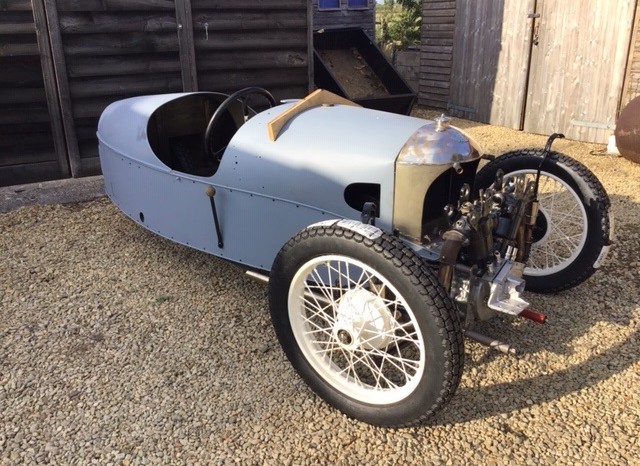 1930 Morgan Super Aero
Reg. no. VA 9916
Chassis no. M210
Engine no. Unknown
Chassis number M210 left the Morgan factory in June 1930 for Frank Spouse, the Morgan agent in Glasgow, to then be registered in November as VA 9916. The car then stayed in Scotland for 86 years. The car is believed to have been laid up during the war years, returning to the road in 1947 powered by a 1925 Anzani engine; it is not known why the car lost the Jap engine. Having been sold several times, this Morgan was then taken off the road in 1952. Following the death of its owner, the Morgan returned to England and restoration began. An appropriate dog-eared Jap engine was sourced for the car. Restoration has included new woodwork, a new beetle back and skirt, new bevel-box bushes, new crown wheel/pinion, new input shaft wheels and brakes etc. The engine has had a new big end, new front and rear shafts, new pistons, cams, valves and guides etc. Over the last couple of years, a lot of time and money has been spent on the car and now there isn’t a huge amount of work to complete the restoration. This is a very genuine Super Aero, one of the most sought after of Morgans.
Extra details and estimates:
£21,000 - 23,000

SOURCE: http://richardedmondsauctions.com/catalogue-new/?lot=2105
SELECTED BY THE SQUIRREL

CLASSIC CHATTER
Powered By Dragons
Posted by jeffharris at 17:32