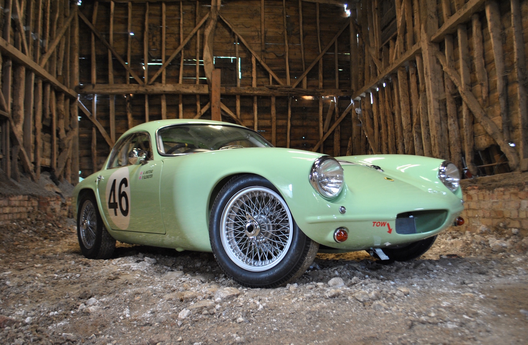 Lotus Elite 1009 represents a unique proposition for buyers wanting to race in top-level historic motor sport or add to a stable of historically interesting cars. Its history and provenance make this Elite one of the most famous in the world and mean it would be welcome at any prestigious historic race meeting or show, worldwide.
Not only is it the first Elite produced as a production vehicle for sale rather than a pre-production prototype as the previous eight were, but it was originally purchased by one of Colin Chapman's favoured customers and friends, jazz legend Chris Barber, a man whose music was influential in the British Blues and Jazz scene of the 1950s and 1960s and whose band was behind the UK's first Rock'n'Roll record, 'Rock Island Line' by Lonnie Donegan. 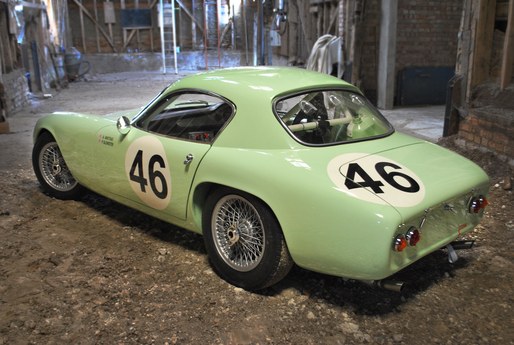 Barber entered and raced the car extensively for 5 seasons in top-level international sports car racing in the UK and Europe including the Nürburgring, Spa and Zandvoort. During this period it was driven regularly by Sir John Whitmore, the 'Racing Baronet', who famously broke the class lap record at Spa using CB23 while on his way to class victory in the Grand Prix GT Support Race of 1962. Other notable drivers who drove the car include Mike Beckwith and Bob Olthoff as well as Chris Barber himself.

Lotus Elite History
The Lotus Elite was debuted at the 1957 Earls Court Motor Show and caused an absolute sensation, the star of the show. At this time it was, without any doubt, the most beautiful and aerodynamic British-built road car ever designed, yet it was being presented by Lotus, a company that was just five years old! The fact it was also made entirely from the new wonder material, glass fibre, simply added to the Elite's aura of other-worldliness. It cost just under £2,000, double the price of the Lotus Seven Chapman had also recently announced, but good value for a car of its complexity, performance and elegance when you consider an Aston Martin DB MkIII was well over £3,000. Lotus' first foray into building a race inspired GT road car for serious production, the Type 14 Elite was the first car to be produced using 'fibreglass' monocoque construction; a technology then in its infancy and first seen, in a much cruder form, on miniature economy sports car the Berkeley SA322. Chapman, however, was obsessed by efficiency and in a car, whether road or race, that meant light weight and low drag. The Elite had a CD figure of 0.29, remarkable now let alone in 1958, and utilised the maximum amount of energy then possible from every ounce of petrol it consumed; amazingly it was capable of returning around 40mpg even when touring at 80plus mph! Chapman saw the fibreglass monocoque as a way of achieving this without the need for expensive tooling, which he simply could not afford. 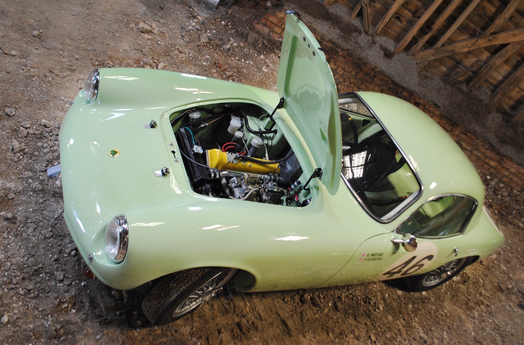 Though still a young man, he was just 29 when the Elite was launched, Chapman was not in awe of more established companies or designers; indeed he relished looking at the basic problem of making a car go as fast as possible over a given distance with completely fresh eyes. He was also very ambitious and saw that if he wanted to grow Lotus into a serious force in racing he had to follow Enzo Ferrari's model of making road cars which paid for the racing. His first attempt, the Six, was a successful but basic car and by 1956 he had ideas about producing a small upmarket GT car with serious performance using the Coventry Climax engine he was so familiar with from racing. 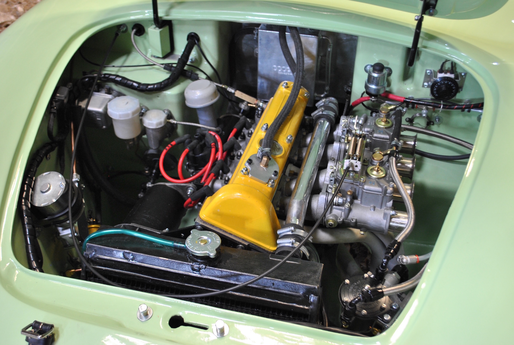 He gathered together his small army of young volunteers, who often worked for beer and sandwiches just to be part of a world-beating racing car company, for this exciting new project. Frank Costin looked at the aerodynamics of Peter Kirwan-Taylor's overall shape, while friends from the Ford Motor Company design office, John Frayling, Peter Cambridge and Ron Hickman, did the detail work on the interior and other aspects. The aim, to produce a coupe that could be used on the road for touring and also race at Le Mans was very ambitious, but the young team more than achieved it. Chapman's own suspension design, softly sprung yet firmly damped, all independent by wishbones at the front and Chapman struts at the rear, gave the Elite fantastically predictable handling while the brakes, all disc but fitted inboard at the rear to reduce unsprung weight, proved more than able to cope with stopping this lightweight gem. The successful Lotus 12 racer also contributed its wheelbase and track. 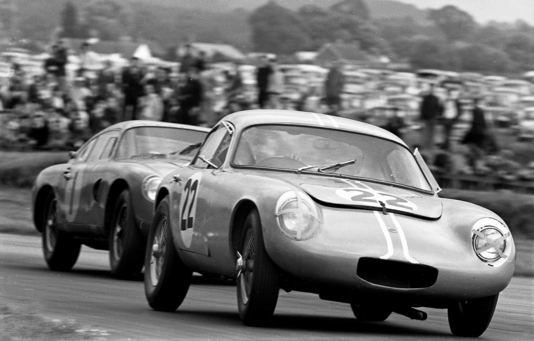 Lotus' groundbreaking fibreglass monocoque was initially developed away from their own workforce for secrecy by Peter Frayling and 21-year-old assistant Albert Adams. The first Elite bodyshell was 'cast' on Saturday, August 31st 1957 and that day Chapman took the decision to debut the car at the Earls Court Show in October 1957. Remarkably the team made that deadline but then had to develop the car into something which worked reliably and could be produced efficiently. This car is the first customer car, chassis #1009 and would be finished in October 1958, just in time to be displayed at the Motor Show alongside the last prototype, 1008. It was then fine tuned before being officially sold to Chris Barber, and entered in the Lotus' Cars ledger on 31/12/1958. Barber, though, had already raced the car as the owner on the 26th of December, Boxing Day, Brands Hatch Sports Car race, so it seems likely the ledger entry was made on the day the factory returned to work following the Christmas break.
By the time Elite production ceased in September 1963, 1030 examples had been made and Lotus had developed from a company unheard of outside of UK club racing to one of the most famous racing teams in the world. They were about to be crowned F1 World Champions for the first time with Jim Clark, and were seen as established world players in road car manufacture with a mature market presence in the USA and elsewhere. The Elite played a big part in this remarkable feat of automotive industrial growth. It was Lotus' first 'grown-up', credible road car and laid down the foundations of the Lotus business that still exists today.

Restoration.
Lotus Elite 1009 has undergone a very high quality nut and bolt restoration by renowned restorer Ant Anstead at Evanta Motors as a racing car, and is not currently road registered. The restoration has been filmed for a forthcoming episode of the 'For the Love of Cars' series which has been so successful worldwide, something which can only add to this car's remarkable provenance.
The restoration involved stripping the car to a bare monocoque and started by examining it with prominent Lotus Elite authority Malcolm Ricketts. The fibreglass monocoque was found to be very sound and original but was stripped back completely and then lovingly refinished in UDT Green.
It was then fitted with a full, FIA Approved, roll cage by Pete Folbigg from 'Fabricage'. The Elite's unique construction makes meeting modern safety standards quite involved and Fabricage have developed a floor mounted frame in addition to their cage. This has been fitted to over a dozen Elites worldwide and is the gold-standard in Elite roll cages. This was accompanied by an FIA homologated Tillett B6F Carbon-GRP racing seat, TRS belts and a Moto-Lita steering wheel.
The engine was rebuilt by Coventry Climax specialist, Glyn Peacock, to his full race 'all steel' specification which includes forged pistons and rods, a steel crank, big valves and every other modification he has developed in many years building only Coventry Climax FW engines. It was tested on the dyno and  produced 120bhp@7300rpm.
The original MGA sourced gearbox was rebuilt by well-known specialist Mike Jennings who fitted a new layshaft, front and rear bearings, and strengthened the clutch slave cylinder mounting. The gears and syncro-cones were found to be perfect.
New wheels, from specialist MWS, were fitted with the correct Dunlop racing tyres.
Once the suspension had been rebuilt with all new parts from Mk14 Components it was set up by well known Elite specialists who ensured that this Elite flows down the road in the way Colin Chapman intended.
Every detail has been restored to better than new standard using only top quality components. The result is a car that is a joy to behold and a thrill to drive. A car that will be competitive in 1300cc class racing just as it was when new and will be welcomed by any prestigious event organiser because of its unique history and bewitching beauty. It also has the latest FIA HTP papers and is thus eligible for all International events.
Offered in pristine condition, and ready to race with fresh FIA HTP papers, this Lotus Elite Type 14 Mk1 presents a unique opportunity for collectors and racers alike.
Suppliers list:
Engine builder: Glyn Peacock Engineering. http://climax-engines.co.uk/
Gearbox builder: Mike Jennings, Harrow Cross Engineering. 01787460965
Rollcage: Fabricage UK. www.fabricageuk.co.uk 01223 870563
Racing Seat: Tillet Racing seats. www.tillett.co.uk
Belts: TRS Motorsport harnesses. www.trs-motorsport.com/
Wheels: Motor Wheel Services. www.mwsint.com
Parts: Mk14 Components. www.mk14components.com/