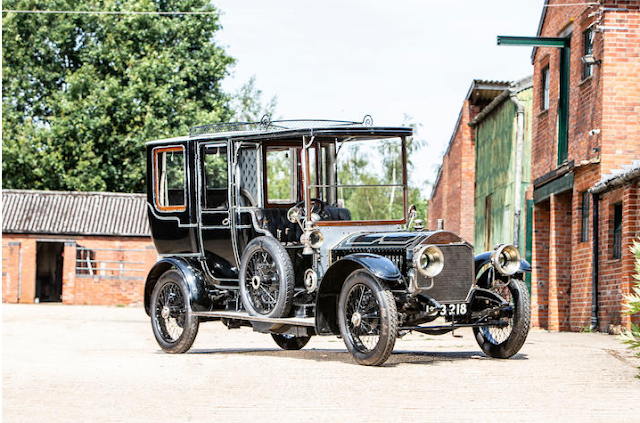 "Napier's list of customers, like the passenger list of the Titanic, recalls all the thundery afternoon sunlight of Edwardian England. Here is ancient landed wealth: here is the recent profit of industry and finance: here are the rich Radical politicians. Here is a memory of the days when there were forty servants below stairs at Longleat, when Sir William Lever, vastly rich on soap, could say he was 'in love with petrol'."
How well Charles Wilson and William Reader in Men and Machines - A History of D Napier & Son, Engineers, Ltd summarised the background against which Mr Ernest Johann Wicke ordered his new Napier Limousine in 1908. Legend has it that he bought the car after it had won major accolades at a London motor show. Wicke lived at Rochester House, Westgate-on-Sea, Kent and maintained a 'sufficient' household, similar to many other Napier customers. His magnificent new limousine, supplied by S F Edge Ltd of 14 New Burlington Street, London, was delivered on 23rd December 1908 and Wicke was to keep the car until 1914. Wicke cherished his Napier, insisting that a Napier motor engineer be provided to drive and maintain the car to the highest standards. He built a substantial motor house for his chauffeur, Percy Frederick Mosely, fronted by a glass canopy under which Mosely could dry off the car after a wet journey, before parking it inside. This property survived in Westgate-on-Sea until comparatively recently.
In 1914 the car was purchased by Ivor Read's father, who retained Mosely's services as a chauffeur. Mosely taught Ivor to drive on the car, which remained in active service until 1925. Correspondence on file indicates that it nearly slipped out of family ownership in 1929 in a part-exchange deal with the Invicta Motor Engineering Works Ltd involving a Ford. Ivor forestalled his father's deal, and the car was thereafter carefully preserved until Ivor's death in 2001. During that period it made local appearances, being exhibited at the Napier Centenary gathering in 1958 and on other notable occasions. In 1979, during Ivor Read's ownership, the Napier was featured in Automobile Quarterly (Volume 17, No 3). Various photographs and papers before and during Ivor Read's ownership are available together with an Instruction Book for Napier Cars, provided by S F Edge Ltd in 1912.
Having rebuilt Ivor Read's larger sporting Napier during Ivor's lifetime, VSCC former treasurer Bill Fone purchased 'LD 3218' from his estate at Bonhams' RAF Museum Hendon Sale in April 2002 (Lot 917). With assistance from Bill May, an engineer apprenticed at Napiers, 'LD 3218' was returned to roadworthy condition without removing the body from the chassis. The engine bearings were satisfactory but the oil pump worn, so repaired. All mechanical work on the chassis and running gear was entrusted to Arthur Archer of Great Dunmow, Essex, who also reproduced the fuel tank and exhaust system. Wheels were rebuilt, brake shoes and drums replaced, patterns made to cast a new water pump, and the electric telegraph from the passenger compartment to the driver repaired. The silk roller blinds have been replaced.
The 6.0-litre engine provides easy performance, geared at around 38mph per 1,000 revolutions. The sprag facility on the transmission engaged by a handle beside the gear lever has been disconnected. Arthur Archer has provided a manual of information and operation of the car to match Mosely's Manual.
Ranking highly amongst the most original surviving formal Edwardian motor cars, 'LD 3218' has stood the test of time remarkably well. The wings were probably changed in the late Edwardian or early Vintage era, a common updating modification, and a later Zenith carburettor is fitted, again a practical improvement for better performance probably carried out at the same time. The body represents state-of-the-art coachbuilding of its era, being a D-front open-drive limousine of most elegant proportions with every comfort provided in the enclosed rear compartment. Unusually, the coachwork widens aft of the rear doors, and the commodious parlour-like interior is superbly furnished with pleated and buttoned cloth upholstery, generously affixed with pasting lace and door furnishings including ivory pulls and handles. There are silk blinds affording privacy to all the rear windows with provision for curtains to the D-windows on the glass division. Passenger comforts include map pockets, smoker's companions, newspaper nets to the roof, passenger sling pulls to each rear window, interior courtesy light and, most remarkably, an S F Edge electrical indicator to convey remote instructions to the chauffeur. The quality of the upholstery and furnishings to the rear is second to none. The chauffeur's compartment features fuel and oil pressure gauges, the chauffeur's instruction indicator, clock mounting, and an Elliott speedometer and mileage/time indicator. The dashboard accommodates the coil box. Driving equipment includes a side-mounted spare wheel, a coiled bulb horn, Napier oil side lamps and S F Edge Ltd Napier acetylene headlamps.
In 2014, it having proved impossible to find reproductions of the Napier's large core radiator tubes in the UK, the core was replicated in New Zealand, and the radiator entirely dismantled, repaired and re-plated through Auto Restorations in Christchurch. By this time, expenditure on the car since its purchase in 2002 had totalled £98,500. Now reliably mobile again, the Napier has taken part in Downton Abbey, Mr Selfridge and similar Edwardian-set TV productions. The car is accompanied by its own tools, Napier tyre pump, acetylene tank, VCC plate, and a copy of the T23 chassis drawings. The summary of the mechanical restoration works is on file, supported by detailed records plus a CD of photographs recording the work at Archer's. A copy of the book Men and Machines will be provided with the car.
'LD 3218' also comes with a copy of the registration book issued in March 1921, a tax disc from 1925, a copy VCC Dating Certificate issued in 1960, MoT certificates, sundry bills, and correspondence from its distinguished past. Rarely do cars of such outstanding museum-quality, originality, and exceptional history of long ownership come to the open market, and yet this is also a car well capable of undertaking any motor tour. 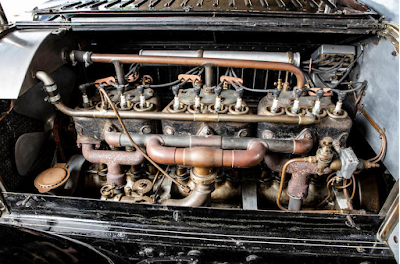 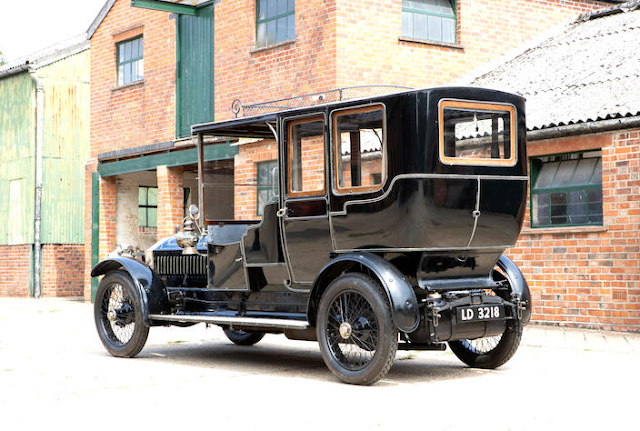