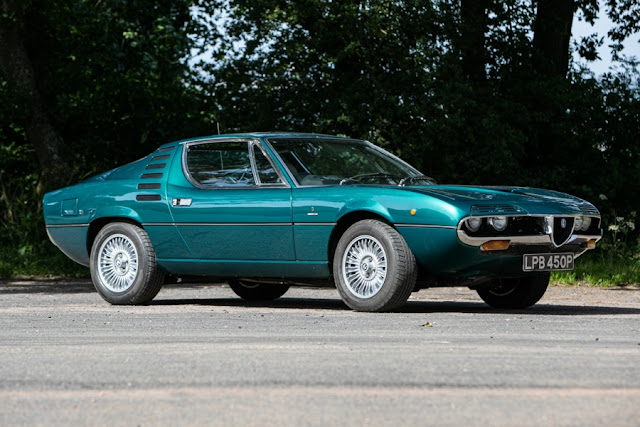 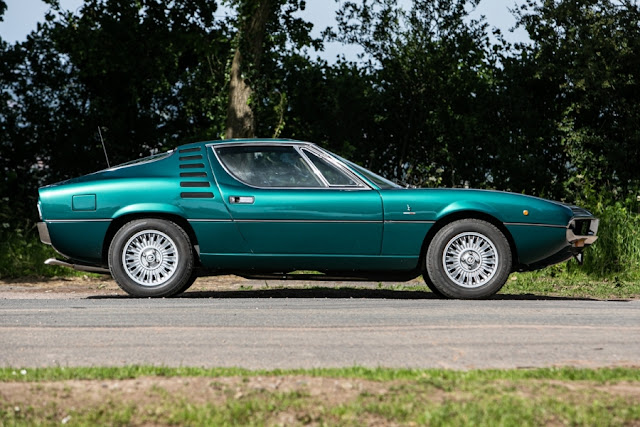 One of 175 original right-hand drive cars. 69,000 miles from new
•    Coming from long term ownership of 27 years
•    Purchased by our vendor from the Patrick Collection in 1993
•    A complete portfolio of all docs/receipts from before and since purchase
•    Fully restored and re-engineered. A labour of love
•    Fabulously presented. A significant Concours car

In 1967, Alfa Romeo dipped its toe into the Supercar sector by launching the Montreal, named after the Montreal Expo where it made its debut.
Initially fitted with Alfa's four-cylinder, twin-cam engine, by the time the Montreal was launched, for a limited production run at the 1970 Geneva Motor Show, this had changed to an all-new V8 quad-cam competition-derived power unit with dry-sump lubrication taken from the successful Type 33 sports racer and mated to a 5 speed ZF gearbox, an altogether more appropriate power plant for such an exotic machine. With a capacity of 2,593cc, the V8 featured twin overhead camshafts per bank and produced, via Alfa Romeo/Spica fuel injection and Bosch electronic ignition, 200bhp at 6,500rpm. This provided excellent performance with a top speed of 137mph and 0-60mph in just 7.6 seconds.
Under the exotic Bertone designed 2+2 coupé coachwork, the Montreal incorporated many stylish features, such as the headlamp eyelids and the NACA duct on the bonnet. The floorpan was derived from a modified 1750 GTV chassis and sported independent coil-sprung front suspension, live coil-sprung rear axle, a limited-slip differential and ventilated discs. This resulted in excellent road holding and braking. In the stylish interior, the seats had built-in adjustable headrests and an unusual external feature was vacuum-operated headlamp stone guards.


From the fascinating history file that accompanies this lovely Alfa, we can glean that its original owner was Diane Raymonde Grant-Murray who kept it for less than a year before selling it on 15/09/1976 to Kenneth Harding Wilson who, during his ownership, painted it Red with acrylic paint and added a 1970's sunroof. He, in turn, parted with the Alfa on 24/01/1983 and it became part of the Patrick Motor Collection where it was to remain until July 1993 when it was purchased by our vendor. We imagine that when he first bought the smart red Alfa he had no idea that it was to be the start of a 27-year journey.
Rather than a restoration, the Montreal appears to have been 'developed' over the years and, although there is a complete portfolio of documents and invoices with the car, it's difficult to establish a timeline. We do know that Rob Thompson returned the car from red to a Dark Metallic Green in 1995 and there are photographs of this. We also know that in 1996, our fastidious vendor, unable to source the correct windscreen rubbers, commissioned tooling in order to manufacture his own. From the car's entry form we learn that it has a full Harvey-Bailey handling kit, Wilwood small 4-pot front calipers (originals retained), 1"larger diameter road wheels (identical Campagnolo design) to suit improved tyre technology, poly-bushed all round, the engine runs re-profiled cams, Newman tappets, an improved water pump system/bearing and front chain guides, and a new steel stainless sports exhaust. A lot of this work was carried out by Alfa guru, Robert Thompson.


Despite the above success, our vendor decided to repaint the car once again and during 2009/10 'Body Beautiful' did a lovely job in the original colour which looks like 'Verde Pino Metallica'. Almost 10 years later the paintwork is still in beautiful condition retaining a deep shine. This is no 'Trailer Queen' and has been enjoyed on two European Tours and recently took part in the 2018 Montreal Scotland Tour.
The Montreal is featured in “101 Great Marques” by Andrew Whyte and the original Peerage Books press transparencies are in the file alongside some from the Patrick Collection, dozens of photos of the various resprays and rebuilds, all the old logbooks, all docs and receipts from before and since our vendor's purchase, the original instruction book, and a pile of MOTs confirming the mileage of 69,000.
This remarkable car has a lot going for it; it's 1 of 175 original right-hand drive cars, it's matching numbers, its history is complete and fascinating, it's been improved and developed by its perfectionist owner for the last 27 years, and it's an Alfa. 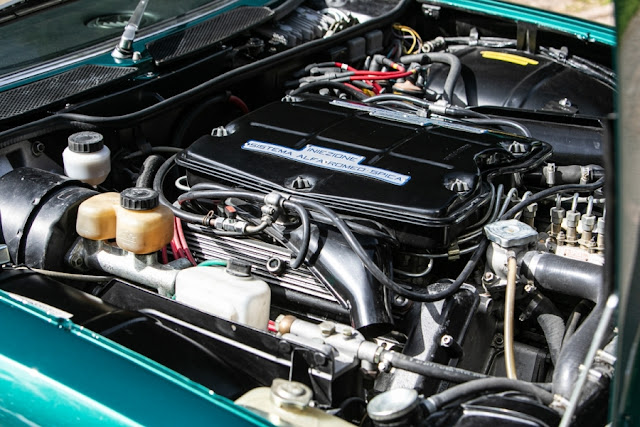 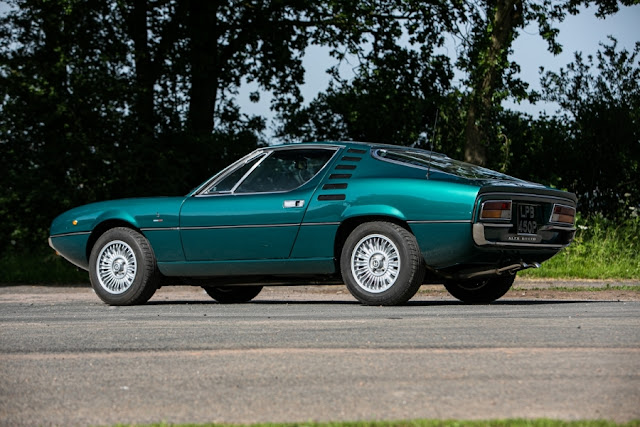