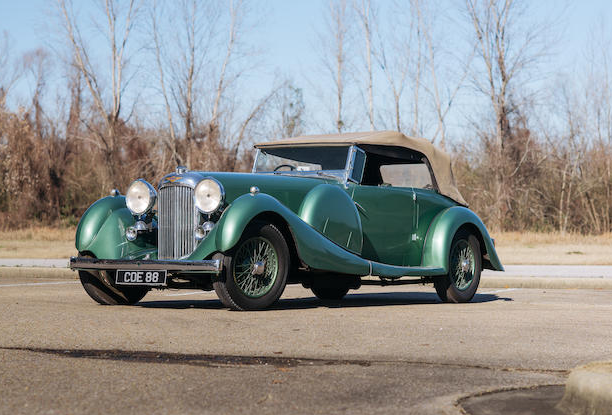 
Lagonda's dramatic victory at Le Mans in 1935, under WO Bentley's energetic leadership, inspired the LG45 model, closely based on the Le Mans Team cars, and introduced the following year. The new LG45 was enthusiastically received amid favourable reviews. "The 4½-Liter has always given a fine performance; in its latest form it provides all the performance that anyone can reasonably require, and at the same time has been silenced, smoothed out and made a much more comfortable car, so that in comparison with the earlier versions it is hardly recognizable on first driving it. It can only be said that the appeal of the car has been considerably widened, for the people who today set great store by noise and a harsh suspension are greatly outnumbered by those to whom refinement in a fast car is far more desirable." - The Autocar, 10th April 1936.


Introduced at the 1933 Olympia Show and based on the preceding ZM 3-Liter model, the M45 deployed Meadows' 4.5-litre, twin-plug six to good effect, saloons being capable of reaching 90mph and tourers the 'ton' under favourable conditions. A team of three specially prepared short-chassis cars (effectively the soon-to-be-announced M45 Rapide) prepared by Lagonda main agents Fox & Nicholls performed creditably at the 1934 RAC Tourist Trophy at Ards, and the following year one of these TT cars driven by John Hindmarsh and Luis Fontes won the Le Mans 24-Hour endurance classic outright.


Under W.O. Bentley's technical direction, the big Lagonda became more refined, the M45's successor – the LG45 - gaining synchromesh gears, flexible engine mounts and centralized chassis lubrication among many other improvements. It was these refinements that encouraged The Autocar to comment so favourably about the new model, and these sentiments were echoed by Motor Sport, who in May 1936, reported that they had recently taken a Sports Tourer identical to the one offered for sale today. Their test involved driving the car from the Works straight to Brooklands and out onto the track, with the windshield folded 95mph had been recorded. Their summary being "Anyone who handles and examines the new Lagonda cannot fail to be impressed with the fine workmanship and the many points of practical value which have been embodied in the chassis design and the layout of the body. The car is one of the fastest, safest and most robust on the British market today and one which will delight the most inveterate road-burner, and yet contrives to cover the miles with quietness and smoothness which spell freedom from fatigue at the end of a long journey"


The Sports Tourer tested by Motor Sport and as presented here was the latest creation of Lagonda's talented in-house designer Frank Feeley, who, at the young age of 25, penned remarkably stylish and individual designs which set Lagonda apart from its peers. This design for the tourer is a brilliant combination body which echoes the racy open tourers of the 1920s, with their sporting carefree looks, but incorporates 1930s practicality offered by a convertible sedan. On a summer's day, the windshield could be folded flat, and the wind-wings turned over as 'aero' screens, yet if the weather should turn, a full-length top could be raised and stowed inside the door panels are windows to fully enclose the passenger area from the elements. Feeley would also create the iconic LG45 Rapide, and after the war is credited with the lines of Aston's DB3S, designs which were rarely bested in their day by even the most celebrated French or Italian carrossiers.


Endowed with such an impeccable pedigree, the 4.5-Liter Lagonda quickly established itself as a favourite among the wealthy sporting motorists of its day. A mere 278 LG45s were produced between 1936 and 1937 and the model remains a much sought-after classic.


Long established British Midlands region dealers Patrick Motors ordered car 12112 from Lagonda on May 19, 1936, and they were clearly in need of the car soonest, as the records state 'Very Urgent'! 5 weeks later, on June 27, it was delivered to them in an understated scheme of Dark Grey Exterior, with its top and tonneau covers in fawn twill. The upholstery colour is listed as Green reference LG16. The wood trim was of matt walnut and two suitcases were supplied with the Lagonda. Even though its engine number is quoted as LG45/224/S2, the same that it retains to this day, there is an annotation that actually states a Series 1 Engine. Other details on the build sheets include notes of a Bluemels steering wheel, Smiths instrumentation, Wilmot Breeden Bumpers, Vertex magnetos, twin gas fillers and luggage carried fitted on the trunk lid.


Per the owner labels on the factory records, the car passed through Hunts Garage to E.L. Rabone on July 30th, 1947, and it would continue to be maintained by the Works through to 1951. However, there is a note at the top of the service record referring to Rabone, which suggests that it was more likely particularly given the proximity to Patrick Motors, that Rabone was their original client and that he parted with the car in 1947, through Hunts Garage of Hagley Road, Birmingham.


On one of Frank's forays in the UK in the late 1980s, he visited noted dealer Richard Proctor's esteemed 'Plus 4 Motors' establishment and promptly acquired both this Lagonda and the black Alvis in the collection. Papers on file show the shipping of both cars together and arrival in Mississippi in February 1989. Mr Spain's handwritten notes suggest that prior to Mr Proctor, the car had spent 4-5 years with another noted pre-war car collector, David Crow, and before that a Richard Fox.


The car has resided in the collection for the last 30 years. In many respects, it seems that the LG45 is as it was delivered new, even to the degree of having been preserved rather than restored in some respects, the rear bench seat seems likely to be the original as do the door panels, and the 'fawn twill' top mentioned in the factory records matches that which it still wears today, so may well be the original. At some point, the paintwork was redone in a more striking Aston Martin style metallic green, and the front seats appear to have been reupholstered. 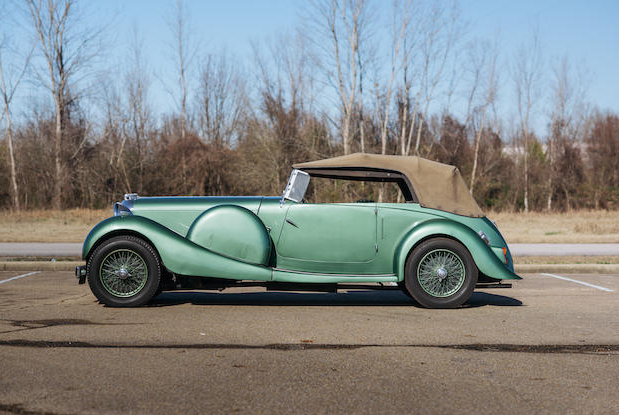 CLASSIC CHATTER
Powered by Dragons
Posted by jeffharris at 19:58