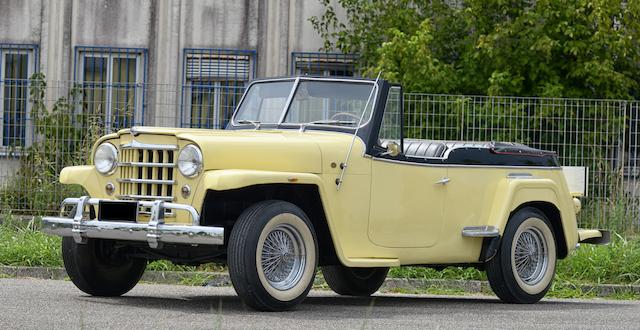 Chassis no. 3023573* Rare American SUV precursor
* Imported into Italy in 1988
* Restored post-importation
* Little used since restoration
* Registered in ItalyThe Willys-Overland company is forever associated with the original Jeep of WW2. Produced by the million, the Jeep saw service in every theatre of the Second World War and continued in military service for several decades thereafter. Perhaps not surprisingly, Willys did not return to mainstream passenger car manufacturing at the war's end, preferring to market civilian versions of the Jeep, most of which were intended for commercial use. Its first post-war passenger car was the Station Wagon, introduced for 1946, which featured an all-steel body painted to resemble a timber-framed 'Woodie'. The front-end styling recalled that of the Jeep, and the Station Wagon was powered by a four-cylinder sidevalve engine displacing 134.2ci (2.2 litres). A more up-market six-cylinder Station Sedan was introduced in January 1948 together with the open-top two-door Jeepster, which had been penned in wartime by the legendary American industrial designer, Brooks Stevens, its lines recalling those of the original military Jeep. This first Jeepster was very well equipped but somewhat expensive, which limited its appeal, as did the fact that it was only available with two-wheel drive. Four- and six-cylinder versions would be offered before the Jeepster was dropped at the end of 1951, its disappearance coinciding with the arrival of a new range of Willys passenger cars. A very unusual sight in Europe, this four-cylinder Jeepster was imported into Italy in 1988 and subsequently underwent a comprehensive restoration. It has only seen minor use since then and still presents very well in every aspect, being reported to drive very well. The Jeepster anticipated the recreational SUV trend by some decades, and this beautiful example would certainly make a fun alternative for the summer touring or to take your friends to the beach. Finished in yellow/black with black vinyl interior, the car is offered with Italian registration documents.
.