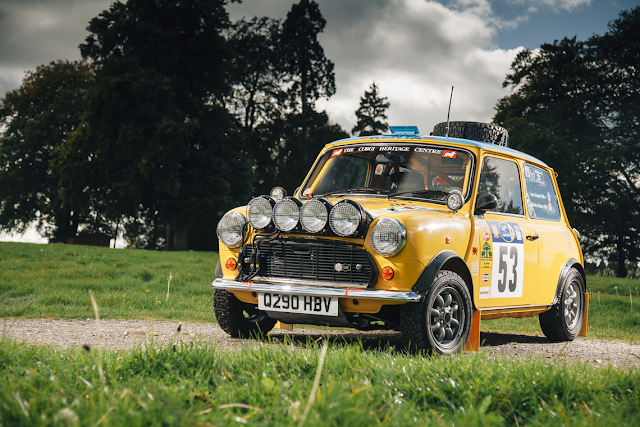 Very occasionally a competition car becomes known internationally by its nickname, think in terms of “The Breadvan” (250SWB Drogo), “Moby Dick” ( Longtail Porsche 935),  John Cooper's “Twini”, the “Blue Train Bentley”, “Big Sam” (240Z Samurai), Gerry Marshall's Vauxhall's “Old Nail and Baby Bertha”, and Dave Brodie's Escort “Run Baby Run”. To this list can certainly be added the little car on offer here, known throughout the world of motorsport as “The Safari Mini”, so named after competing in the gruelling East African Safari Rally, not once which would have been remarkable in itself, but 5 TIMES!!!
This amazing little rally car named 'Du Du' (Swahili for a little insect) had been in storage since 2004 after returning from Africa in Zebra colours and its last attempt on the Safari in 2003. It was recently purchased by Malcolm Huxley and his lady co-driver Anne Sealand (Annemal Motorsports) and returned to circulation. They took the decision to restore the mini to its former glory, pretty much as it was for its first Safari attempt in 1997 when it was sponsored by Corgi Models.
Built originally in 1995 by Robert Plant Engineering (RPE Motorsport), Q290 HBV is a fully-documented 'Group A Rally Car'and was put together for the '95 'Network Q Rally of Great Britain' starting in Chester. Amongst others, it competed on the
RAC Network Q; 1995
Perth Scottish; 1996
East African Safari; 1997, 2000, 2001, 2002, 2003
Monteburge Rally Sprint, Belgium; 1998 (2nd in class)
Goodwood Festival of Speed Rally Sprint. 3rd fastest stage time driven by Robert Plant.
The details of its recent restoration and bare metal respray are with the volumes of history that accompany this little car. During the rebuild, it was felt that, whilst the car was quite capable of being rallied again, it was unlikely to be so, and given its likely usage at Goodwood, Race Retro, Cholmondeley Pageant, for example, the original engine was too precious to be used for short demonstrations and cold starts etc. The engine currently fitted is a highly modified 1275 MG Metro Turbo unit and there is a full A4 page in the file with its build spec. There are similar full pages of details on the 'Running Gear', 'Interior', 'Body', and 'Gearbox and Diff'. We understand that the gearbox alone would cost around £2,800 to build from new. Since its rebuild, we understand that Du Du has covered less than 30 road miles.
The original 'Safari' 1380cc engine with manifold and throttle body is available to the car's purchaser by separate negotiation.  (“Around £1,500”).
Corgi Heritage Centre produced scale models of this car in 1997 and 2000, and in different variations with Land Rovers and trailers.
Q290 HBV will be accompanied by its SORN details, original FIA papers, spec sheets and one of the thickest photograph albums we have ever seen. A PDF document with full details of every aspect  (including its original engine) is available from Guy Lees-Milne at Silverstone Auctions.
To do the Safari once in a Mini would be regarded as foolhardy by anyone who understands the destructive nature of the terrain, but five times!!. This little car is a British Motorsport Hero and an important part of Mini history. Rally enthusiasts all over the country are looking forward to seeing “The Safari Mini” back in action.