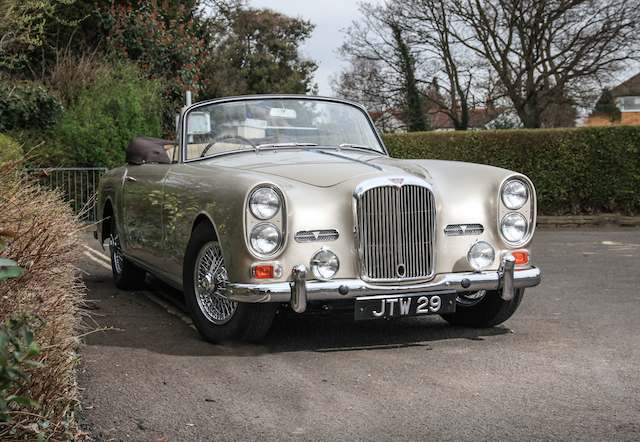 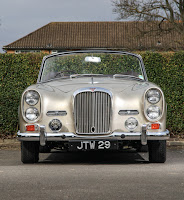 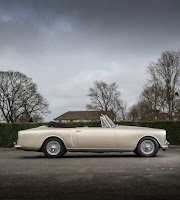 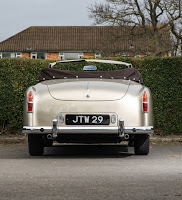 After the Second World War, the 1919-founded Alvis Motor Company specialised in sports saloons, traditionally styled and coachbuilt, with the Grey Lady model being capable of over 100mph. In 1955 however, Graber styled, what was considered to be, a stunningly attractive two-door, pillarless coupé based upon a Grey Lady chassis which could comfortably transport four people with speeds up to 110mph.
Although the Swiss firm did body several chassis from Coventry, their design was reproduced by celebrated English coachbuilders, Park Ward, who produced both fixed head and drophead versions. With a Rolls-Royce standard of finish, the new Alvis quickly magnetised an up-market following which included Prince Philip and Group Captain Sir Douglas Bader CBE, DSO, DFC. There is little doubt that it is the exquisite coachbuilt sweeping lines and compelling motive force that have attracted clientele the world over ever since.
We are delighted to offer this Alvis TE21 Drophead Coupé bodied by Park Ward that was first registered to a Mrs. J. T. Waddilove, Purley, Surrey on 12th November 1964. The motor car was ordered direct from the 1964 Motor Show; the supplying dealer being Jack Barclay Limited, Berkeley Square, London, W1. It is understood that it was at this show where Prince Philip ordered his personal Alvis. The original sales invoice records that this Alvis was supplied with the registration number, JTW 29, power steering, chrome wire wheels, antifreeze and a full tank of petrol.
The Waddilove family used it until 1975 whereby it was laid up in dry storage until its discovery in 2008 whereby the current (and second owner) purchased the motor car. After such a long lay-up, the car required extensive restoration and a decision was made soon after its acquisition to begin the works required. A bare metal strip down was undertaken and coachwork repairs carried out to a high standard. Photographs with the file show the Alvis stripped to bare metal and entering the Aston Martin Heritage Centre works, Newport Pagnell where the panel work was completed.
Virtually everything in regards to the coachwork, mechanical and trim items have either been replaced or repaired. Even the radio has been rebuilt and now receives FM stations. Although, prior to the restoration, the engine started and ran well, it was decided to convert the cylinder head to unleaded fuel specifications. Whilst the cylinder head was removed, the bores were inspected and no wear was found; a tribute to the standards that Alvis built their motor cars and to the somewhat low mileage recorded.
The restoration was carried out over several years and currently JTW 29 displays its original colour combinations of metallic beige coachwork with beige leather trim. The paintwork was carried out by Grimshaw & Wake Ltd. of Hampton who have an outstanding reputation as first class coachwork specialists and the leather upholstery was retrimmed by Trimming Services of Cobham. The interior, with its leather and walnut dashboard and fittings, are in fine order, as is the roof that operates easily and freely. In fact, the walnut trim is original and un-restored and remains in remarkable condition today. This fine example starts, runs and stops reassuringly, all four Dunlop calipers having been replaced, whilst the steering is operated with ease, even at low speeds, no doubt due to its original power steering option being fitted.
The history file is extensive and includes the already mentioned original purchase invoice, copy of the original style log book, period factory warranty, letters of correspondence, works invoices, a works parts catalogue, photographs including period black and white images of the Alvis, an Alvis Owner's Club valuation of £85,000 dated November 2014, old MoT test certificates and various magazine/newspaper articles of the marque. Although having a current MoT test certificate valid until October 2017, the vendor is keen to install confidence in any potential purchasers so the Alvis will arrive at the sale with a fresh certificate. This most elegant of motor cars represents one of the finest and, most importantly, authentic T-Series Alvis's available on the market. 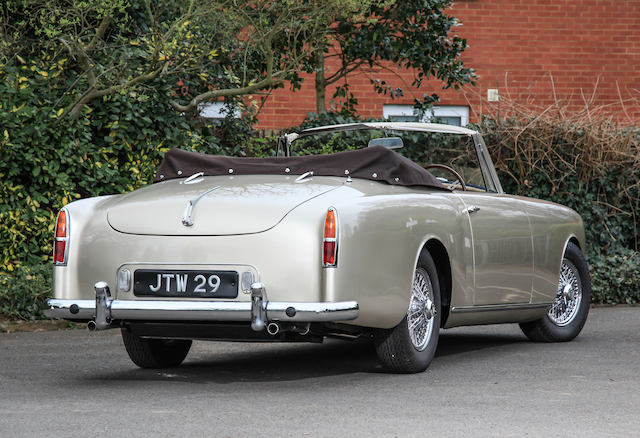