COACHWORK BY SCAGLIETTI - DESIGN BY PININFARINA 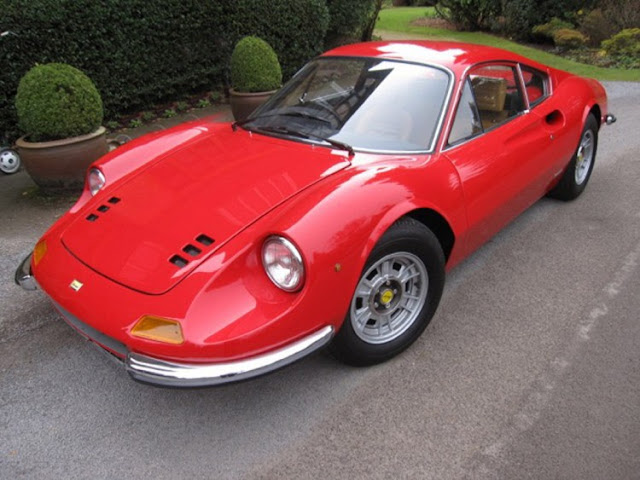 It was the need for a production-based engine for the new Formula 2 that led to the introduction of a ‘junior’ Ferrari, the Dino 206GT, at the Turin Motor Show in 1967. Building on experience gained with its successful limited edition Dino 206S sports-racer of 1966, Ferrari retained the racer’s mid-engine layout for the road car but installed the power unit transversely rather than longitudinally. 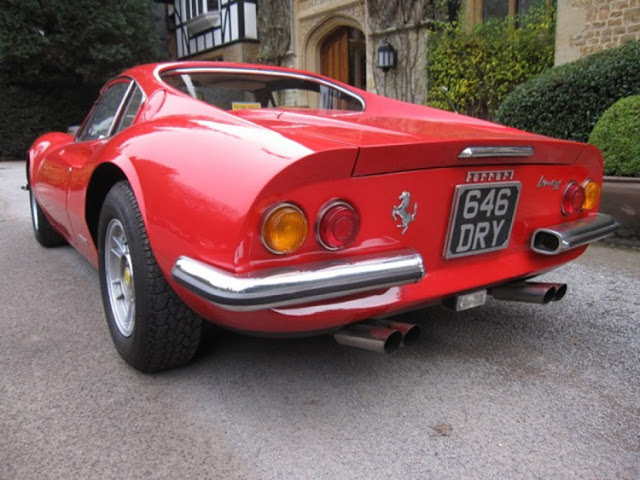 A compact, aluminium-bodied coupe of striking appearance, the Pininfarina-styled Dino – named after Enzo Ferrari’s late son Alfredino Ferrari and intended as the first of a separate but related marque – was powered by a 2.0-liter, four-cam V6 driving through an in-unit five-speed transaxle. The motor’s 180bhp was powerful enough to propel the lightweight, aerodynamically efficient Dino to 142mph, and while there were few complaints about the car’s performance, the high cost enforced by its aluminium construction hindered sales. 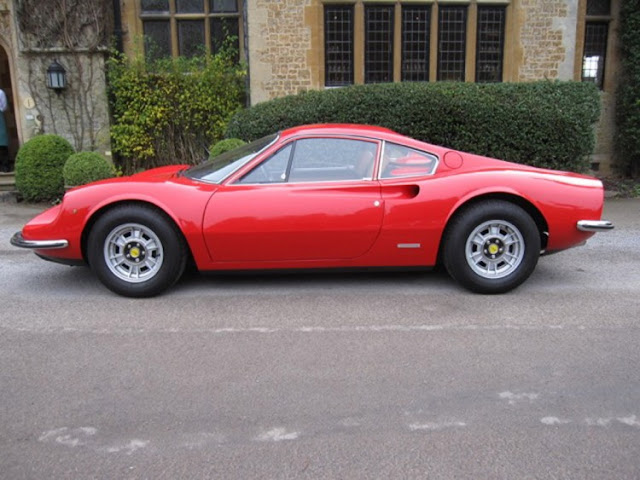 A 2.4-litre version on a longer wheelbase – the 246GT – replaced the Dino 206 in late 1969. The body was now steel and the cylinder block cast-iron rather than aluminium, but the bigger engine’s increased power – 195bhp at 7,600rpm – was adequate compensation for the weight gain. A Targa-top version, the 246GTS, followed in 1972. While not quite as fast in a straight line as its larger V12-engined stable-mates, the nimble Dino was capable of showing almost anything a clean pair of heels over twisty going. 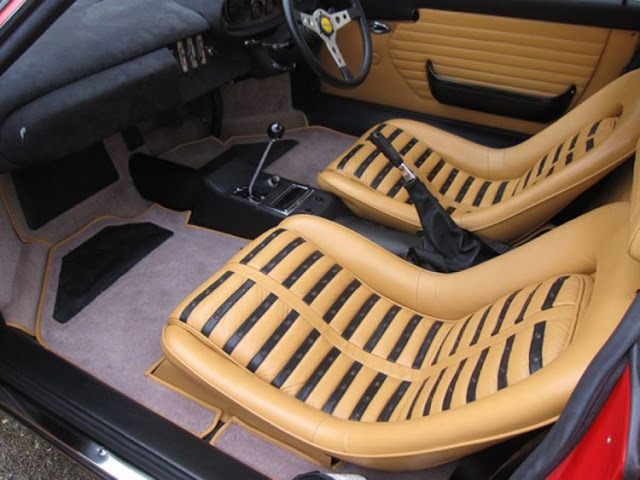 Order number D/632 was placed with the factory on the 6th July 1973 as part of Maranello Concessionaires August allocation of cars. The order was acknowledged on the 27th July. The car was invoiced by the factory on the 11th October 1973 for delivery to the UK by truck.
On Saturday the 12th January 1974 Mr Ian Phillips from car dealers Phillips (Belfast) Ltd met Maranello Concessionaires Ltd sales director, Mike Salmon.  On the 30th April 1976 the car was purchased and registered to Greencoat Motor Co of London, with some 24,000 miles.
Greencoat Motor Co sold the car to Mr Howard Baws of Kent, registering the car to him on the 25th June 1976. Mr Baws owned the car for just over twelve months when it was bought by Mr Victor Melik of Wales on the 29th June 1977; Mr Melik using John Etheridge of Chelsea to maintain it. It was purchased by Mr Howard Thomas of The Paper Supply Company of London, on the 21st September 1978 now with 34,000 miles.
A letter from Greencoat Motor Company dated the 27th September 1978 to Mr Thomas set out the cars background to date – albeit they did say it came from Jersey rather than Northern Ireland. During Mr Thomas’s ownership it was maintained by the then Ferrari agents Brighton Car Concessionaires Ltd, The car was purchased by Mr William Jepp of Surrey on the 29th June 1981 who bought the car with circa 48,000 miles. Mr Jepp used Modena Engineering, for maintenance. 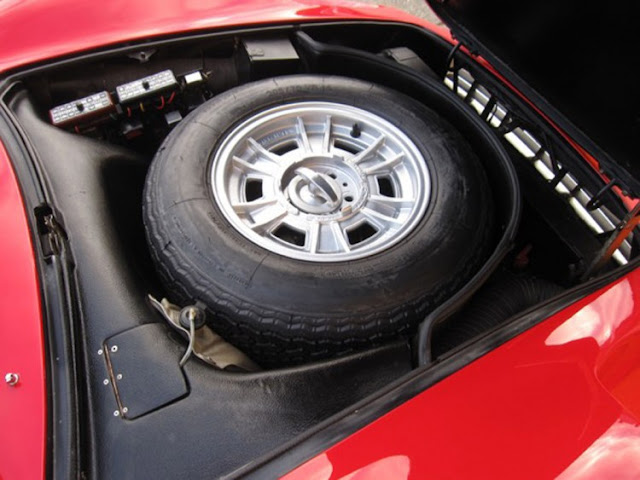 Mr Percival Webster of Sussex,  became the next recorded keeper on the 18th May 1982. Mr Percival owned the car for eight years when solicitor Mr Rory Fordyce of Middlesex became the next registered keeper on the 25th May 1988.Mr Fordyce appears to have sent it to Joe Nash of Dino Services, a major Dino specialist at this time. It was then  purchased by Mr David Edwards of South Wales for £29,000 on the 27th July 1990. Mr Edwards had Dino Services complete the restoration which is documented with invoices and colour photographs. The car was refinished in its current hue of Rosso 300. The paintwork alone costing £6,044.40 (29-10-90 Invoice No E389) The engine, gearbox, suspension, steering and brakes were also rebuilt by Dino Services with the final invoice in February 1991. It was re-trimmed in tan with black “Daytona” inserts by Dave Strange of Send, Surrey for £3,750 being completed on the 27th March 1991. Mr Edwards used the car, returning it to Joe Nash for a 500 mile service on the 3rd January 1992. Following a road test, a report by London Ferrari agents HR Owen and now with 55,455 miles on the 9th November 1992, it was purchased by former 308 GT4 owner, Mr Phillip Brigstock of London who became the registered keeper on the 9th November 1992. Maintenance passed to Kent High Performance Cars of Maidstone, Kent. The car was entered in the 1994 Ferrari Owners Club, where it won its class – first time entrants-with 332 points. Mr Brigstock kept the car until late 1997 when it was purchased by Mr Richard Boyd of Warwickshire who entrusted Mortimer Houghton Turner to look after the car. This included new camshafts, head gaskets and a clutch (October 1997 @59,577 miles) as well as routine servicing. The car passed into the ownership of Paradise Racing Ltd on the 19th July 1999 who sold it to Mr Alecos Pappas of London later that year. Mr Pappas took the car to the dry climate of Athens, Greece, before returning it to the UK and to Paradise Garage of London. Mr Sven Lorenz of London became the next recorded keeper on the 14th March 2003, buying the car from Paradise Garage 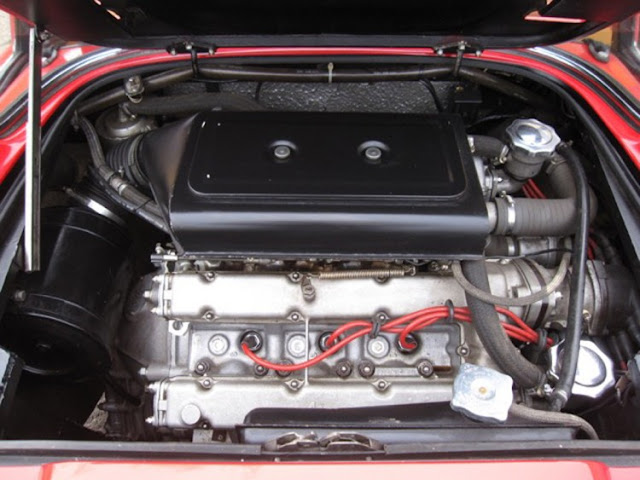 The penultimate owner, Mr Russell Backhouse of Dorset, became the next recorded keeper on the 12th November 2007.The last owner,  a gentleman from London,  bought the car in April 2010 with 63,289 miles.


A total of just 498 right hand drive Dino GTs were delivered to the UK via Maranello Concessionaires Limited; rarely are they offered on the open market. Not to be confused with the common left hand drive variant, this motor car is for the true Ferrari collector. Less than half the price of a Daytona, and trailing some way behind a 206 GT, this late 1960s Pininfarina designed Ferrari offers terrific value in today’s market. 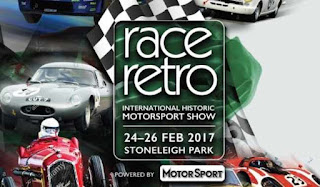