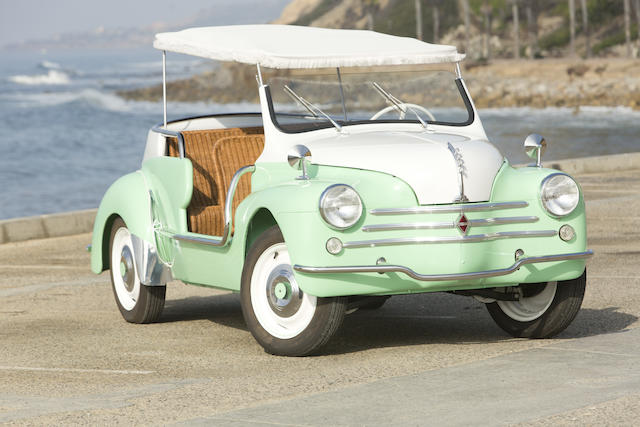 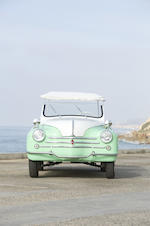 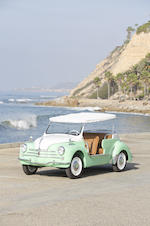 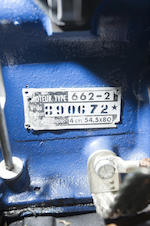 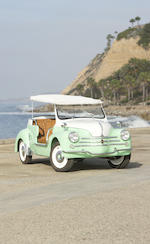 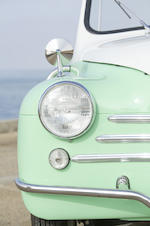 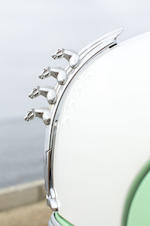 Nationalized by the French government at the end of WWII, a re-vitalized Renault commenced post-war production with two models: the Juvaquatre, an up-dated design from the 1930s, and the 4CV, an entirely new car. Conceived in secret during wartime, the 4CV had been influenced by the most advanced small car of the pre-war period - the FIAT 500 Topolino. Better equipped than many cars twice its size, the Topolino with its hydraulic brakes, independent front suspension, and 12-volt electrics, set a new benchmark of refinement for small cars when launched in 1936.

Beginning production in 1946, the Renault 4CV improved on its Italian rival's specifications by virtue of its four-door, four-seat body, which included an all-independent suspension, and overhead-valve engine, though the FIAT would soon gain the latter. The 4CV's rear engine also set it apart from the FIAT of course, and this layout would characterize all Renault's mainstream passenger cars until the 1960s. Initially of 760cc (it was downsized to 747cc in 1950) the four-cylinder engine produced between 19-22bhp and drove via a three-speed gearbox. The 4CV's top speed was around 60mph, but for those who wanted more excitement there was a high-performance version - the R1052 Sport. 4CV production had totaled over one million units by the time the model was withdrawn in 1961. The car's outstanding commercial success played an integral role in laying the foundation for Renault's post-war resurgence.

Undoubtedly the most endearing variant of the 4CV was the open beach car, or Resort Special as it was officially named. The delightful open runabout was intended for beach resorts and other tourist destinations. Created by the prominent Italian coach building firm Carrozzeria Ghia on the Renault 4CV base, the cars featured weather-resistant wicker seats and a fringed surrey top for protection from the sun. Comparatively expensive (nearly twice the price of the basic model 4CV), only fifty of these Resort Specials are believed to have been built.

This exquisite Renault 4CV Resort Special stems from a rare breed indeed. Purchased by the consignor in California some years ago, the car is believed to have spent several decades in the West Coast state. The consignor, a San Pedro-based collector, car connoisseur, and restorer, has treated this rare Renault to a comprehensive restoration. With the help of several well-known Southern California collector car specialists, the Renault was completely disassembled. All of the body work was media blasted before being treated to a fresh paint job by noted painter, Mario Perez, in a charming Mint Green and Cream two-tone livery. The suspension, braking and cooling systems where all refurbished. Re-plated/re-chromed nuts and bolts throughout attest to the meticulous attention to detail. The engine was overhauled by well-known Jaguar specialist Richard Jenkins, and the gearbox was taken apart and refurbished with new seals and bearings before a new clutch was installed. New wicker seats were hand-woven, and the cars instruments and switches refurbished. Photos of the comprehensive work performed can be found in the cars history file.

Beautifully presented inside and out, this charming Resort Special would be a great choice for the ranch, beach, yacht club, or racing paddock, and will surely initiate smiles and conversations wherever it goes.
VIEW CONDITIONS OF SALE
GO TO MOTOR CARS
AUCTION INFORMATION

PREVIEW TIMES (OPEN TO THE PUBLIC)