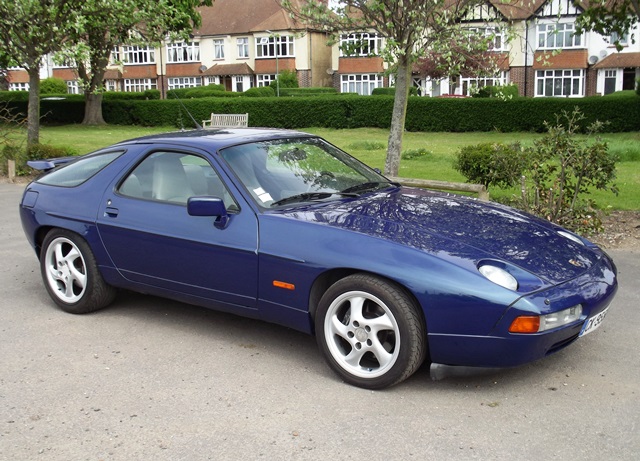 1989 PORSCHE 928 S4
The Porsche 928 was a front-engined sports-GT sold from 1978 to 1995 and was an immediate hit with demand in the UK far outstripping supply. Originally intended to replace the company's iconic 911, the 928 attempted to combine the power, poise, and handling of a sports car with the refinement, comfort, and equipment of a luxury saloon to create what some Porsche executives thought would be a vehicle with wider appeal than the compact, quirky and sometimes difficult 911. The 928 qualified as a 2+2, having two small seats in the rear which could be folded down to enlarge the luggage area and both the front and rear seats had sun visors for occupants. Porsche's design and development efforts paid off during the 1978 European Car of the Year competition where the 928 won ahead of the BMW 7-series and the Ford Granada.
The body, styled by Wolfgang Möbius under guidance of Anatole Lapine, was mainly of galvanized steel but the doors, bonnet and boot were made of aluminium to save weight.  Polyurethane elastic bumpers were integrated into the nose and tail and covered in body-coloured plastic; an unusual feature for the time that was intended as both a styling feature and to reduce drag.
In 1980 the 928S was introduced with a larger 4.7 litre engine and wider wheels and tyres. The new engine produced an output of 320bhp and there were significant styling changes which gave the car a cleaner, sleeker look.
The 928 S4 automatic offered here was originally supplied to a German customer and was later sold to a French owner from whom the current vendor purchased it one year ago. The Blue Pearl paintwork is in excellent condition and the car has been regularly serviced as shown by the two service books which come with the car. New cam belts, distributor cap and plug leads have been recently fitted as well as a new windscreen, battery and tyres.  A new set of wheels was fitted two years and the car is fitted with an optional battery isolator switch. On the road the car drives well with the automatic gearbox changing ratios smoothly and the engine shows good oil pressure. The Porsche has a new MoT test certificate and is presently on NOVA certification with duty having been paid. It is clear that the Porsche 928, in particular the later versions, is rapidly gaining classic status and good examples are now becoming hard to find. The car offered today, in spite of its relatively high mileage, has been well looked after and must represent a sound yet practical investment opportunity based on its attractive estimate.


John Williams is in the South West on