"COMING TO AUCTION"
We continue our look at Brightwells next sale which is to be held on Wednesday 10th June at Easters Court , Leominster. The auction brings together an eclectic mix of vehicles from the Stondon Museum, this is the second part of the sale the previous sale from Brightwells in April this year also featured various vehicles from the collection.
Our choice today is Lot 15 in the catalogue, you will find a link at the bottom of the page for you to view the other lots in this special sale. 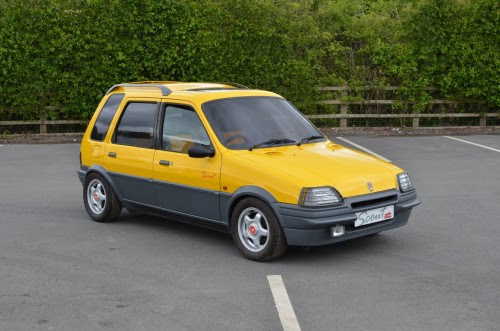 The Austin Mini Metro always had a hard act to follow when it was planned to be built alongside (and ultimately intended as the replacement for) the much-loved Mini.
Thus a lot was expected from the modest Austin Metro and BL pulled out all the stops when the car was launched at the 1980 British Motor Show with the British Prime Minister, Margaret Thatcher in attendance. The Metro quickly proved popular with buyers, and during the early part of its production life it was the best-selling mini-car in the UK.
However, whilst a most competent car in many ways, it was ultimately regarded as the soulless product of a large corporation, rather than the exquisite creation of an inspired genius like the Alec Issigonis-designed Mini had been. The Metro had stiff competition from other manufacturers too, and by the mid-1980s was soon eclipsed by the updated Ford Fiesta.
Despite these handicaps, the Austin Metro was a huge seller in Britain, with more than 1 million being sold over a 10-year production run. In May 1990, the Metro was officially re-launched as the Rover Metro, heavily revised and fitted with a new range of engines.
The Rover Scout was created in 1991 when Automotive Development Consultants (ADC), based in Dunstable, decided to develop six Metro-based multi-purpose, mini-utility ‘lifestyle’ vehicles, to fulfil the needs of outdoor professionals. ADC worked with several firms at that time, as independent design consultants in the initial stages of vehicle development and had previously been involved with Rover with the MGF programme.
According to Jim Ragless, a former manager at ADC: "The Scout was conceived and built by ADC as a showcase of our concept, design and build capabilities for the Automotive Engineering show at the NEC. The idea was a possible evolution of the Metro range with more space, more utility and easier entry-exit to the back seats."
A standard Rover Metro was modified with a taller roof, a higher rear hatch and taller side windows, amongst other details. But as Jim Ragless explained; “Rover was interested enough in what we were thinking about to provide the donor car, but not enough to pursue the project”. Rover at that time had their own crossover off-roader which would eventually be launched as the Freelander. As a result, the ADC Scout was soon forgotten.
This Scout was registered in 1990 and given by the Rover Group to ADC of Luton to redesign the roof and rear door. ADC went into receivership and the car was then bought at a liquidator's sale, we assume by the Saunders family of Stondon. The vehicle was registered to Chris Saunders in 1994 and consequently to the museum in 1997. It shows only 1,290 miles on the clock.
Bidders are advised that this car is not roadworthy at present but also included in the sale are some original moulds for the car, which will only be available for collection from Stondon Museum itself. It will be possible to view these moulds at the museum on Friday 5th June between 10am and 4pm.