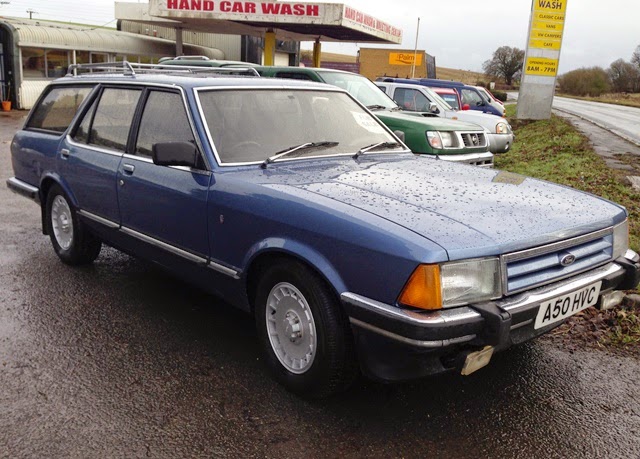 The square and straight-lined Granada '78 appeared in August 1977 and was produced until April 1985 following a mild facelift and attention to drive train in 1982. By the time of its introduction, UK Granada production had been quietly abandoned for the UK market Granada II's were imported from Germany. As the range matured, another two models were introduced. This model borrowed the 2.8i 'injected' engine from the Ghia model range. Towards the end of its production run, the introduction of the 2.0 and 2.3 LX saloon and estate provided UK versions with a slightly higher specification than the 'base' L models. A special Ford of Britain only, edition of the Ghia X model was later introduced as the 'Ford Granada Ghia X Executive' which standardised luxury appointments such as the high grade Connolly Leather interior that had previously been an optional fitment. Further refinements such an electric sunroof, electric opening boot on saloons, electric seat adjustment, heated seats, trip computer and air conditioning set the Granada Ghia X above most other cost comparable executive cars available in the UK in the early eighties.

This Granada Ghia estate was first registered on 16th August 1983 and has covered only 74,000miles since new. The condition of this Ford can only be described as exceptional and are pleased to report she drives every good as she looks. The blue paintwork is in very good order, as is the interior. The 2.8 litre fuel injected engine started immediately when requested and performed well on our road test. Supplied with a V5 registration document and a current MoT test certificate,