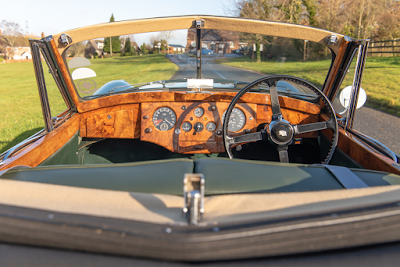 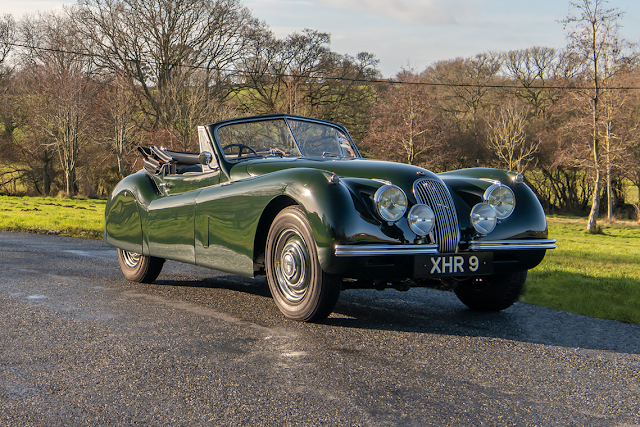 Launched in Roadster form, at the 1948 London Motor Show as a test bed and show car for the new Jaguar XK engine, the level of acclaim was such that Jaguar founder and design head, William Lyons, put the XK120 into production. The first roadsters, hand built with aluminium bodies on Ash frames mounted on modified Jaguar Mark V chassis, were constructed between late 1948 and early 1950. In order to meet the unexpected demand beginning with the late 1950s cars, all bodyshells were pressed steel, although they retained aluminium doors, bonnet and boot lid. With an alloy cylinder head, hemispherical combustion chambers, inclined valves and twin SU carburettors, the dual overhead cam 3.4-litre straight six engines were comparatively advanced for its time and developed 160bhp. All XK120s had independent torsion bar front suspension with semi-elliptic leaf springs at the rear, recirculating ball steering, a telescopically adjustable steering column, and 12-inch drum brakes all round. They were available in Fixed head, Roadster and Drophead form and sold extremely well, with the vast majority of sales going to the United States.

Our car was manufactured on the 19th May 1953, making it an early example of the Drophead Coupe. Being the last variant of the XK120 only 1,767 were made, making it the rarest 120 configuration (7,606 roadsters, 2,672 FHC). The car was originally built in left-hand drive for the US market and it wasn't long before it arrived in sunny Texas. Texans have never really thought of themselves as Americans and are particularly pro-British so when the first owner of this Jaguar, who was a member of the West Texas Sports Car Club, entered the car in one of their local rallies, the Jag fitted in well amongst its peers. The XK was rather successful in these Road Rallies with multiple top-three finishes and a win, all documented in the history file.
The last US owner appears to have been a Serviceman, based at Reese Air Force Base. Here the car stayed garaged until 2000 when it was shipped back to the UK and its first UK owner commissioned a full body-off restoration and conversion to right-hand drive by Chris Odling Engineering. Having been based in the dry state of  Texas, the car was found to have no significant corrosion allowing the restoration to retain the original panels and preserve originality.  During the restoration – which is documented thoroughly with pictures in the history file – the car had a bonnet strap and bonnet louvres added and was repainted in British Racing Green.

Our vendor purchased the car in 2004 and has owned it ever since. He has been fastidious and converted all remaining items to full UK-specification throughout his ownership, including replacing the sealed-beam headlamps with Lucas F700 tri-bar headlamps, sourcing an original steering wheel, and removing the bonnet strap and wing mirrors. Original Lucas Spot Lamps were also fitted, together with a Stainless-Steel Sports exhaust, an electric choke and other beneficial upgrades. The original steel wheels and spats have been retained in contrast to many other 120s, which now run on wire wheels.

All in all, this is a 'proper' old Jaguar. It has a great history file from both the US and the UK (original US registration documents, and other great assets), the drop head mechanism works flawlessly, the car starts and purrs superbly, and the original spats complete a set of swooping lines that would leave people open-mouthed in the early fifties as the 120 wafted past.
The car comes with its super number plate XHR 9, the original tool kit, and a great history. Tip-top. 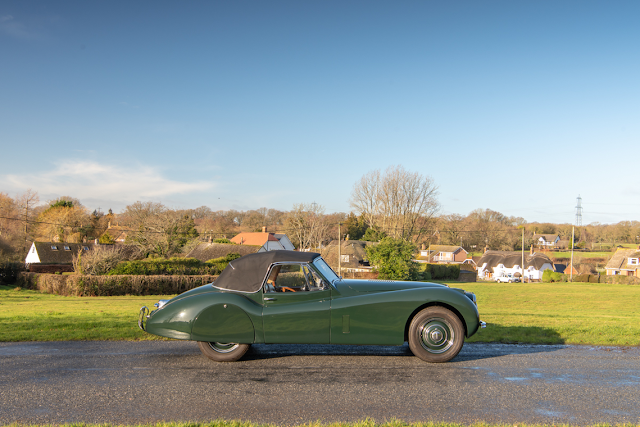 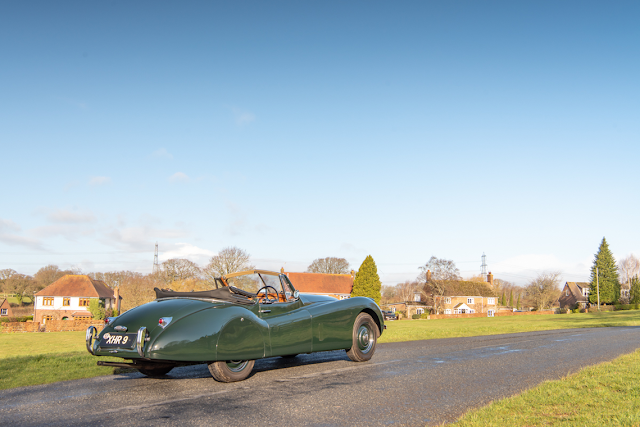