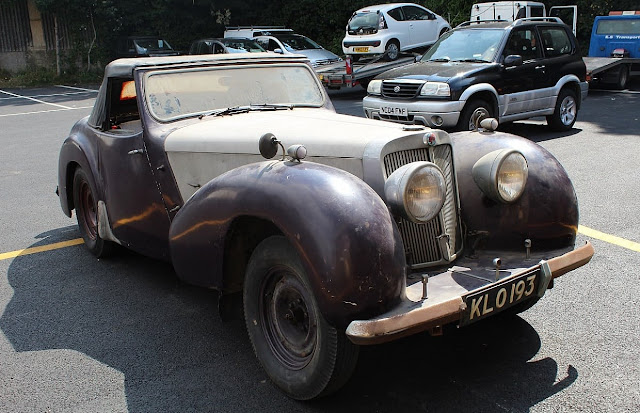 ” Chloe ” comes to you inclusive of: a reupholstered front seat ( which is loose – the seat runners are in the r/h side of the boot ); a replacement silencer box and tailpipe; the original 5 hubcaps with black band plus a full set of newish chrome hubcaps complete with Triumph “World” discs; 5 newish chrome rim embellishers; besides the alum painted rad cap there is a replacement chrome plated one; the manifold and j pipe to the reconditioned engine plus what maybe the car’s original manifold.
All the major parts are included to the best of the vendor’s belief and there are numerous smaller spares right down to new rubber hoses and Champion L10 spark plugs. The reconditioned engine, by the way, is stamped with serial no. EN 1935 E and is the earliest known EN numbered engine to the Triumph Roadster Club. Regrettably, the vendor has not been able to locate the Roadster Workshop Manual but has included the Triumph Roadster Club’s ” Drivers Instruction Book “.
As regards the car keys – The round-headed key operates the ignition and the right-hand boot lock. Care needs to be taken when operating the latter by placing a thumb or finger on the cylinder barrel as one turns the key otherwise the whole cylinder will freely lift up clear of the housing.
There are 2 ” Made in England ” keys which operate the Driver’s door lock – NOTE: There is no key lock for the passenger door as it simply locks by moving the inside handle to the UP position.
Large Tools – are all present on the scuttle with the jack clipped on the l/h inside the bonnet. The vendor states he did not get any Driver’s rolled toolkit of spanners, etc when he purchased the car.


As to Chloe herself, she’s been In the current ownership since 1976 and was taken off the road in 1978 following a wet cylinder liner seal (NOT head gasket) failure. Work was started on overhauling the engine, but marriage, children and work/life commitments have halted more progress. Two new tyres have recently been fitted. The Badge Bar, which fits on the 2 front Bar Supports between the front wings, is included with an early version of the Triumph Roadster Club badge.  All the original log books are included, showing Chloe’s entire ownership history, and confirming the registration is the original.
Update: The vendor has made us aware that the vehicle has had an engine change at some point as when cleaning the casting plate last year he discovered engine number EN1935E, he tells us he notified DVLA and obtained an updated V5C.
The Triumph Roadster was built by the Standard Motor Company from 1946 to 1949.  Originally available as the Triumph 1800 Roadster – ( ex-Jaguar engined ) 18TR – from 1946 to 1948 then from late 1948 to 1949 as the Triumph 2000 Roadster  – TRA, now utilising the same engine as the new Standard Vanguard saloon.
Sir John Black, then Managing Director of Standard-Triumph,  wanted a rival sports car to the sensational Jaguar XK120. For whatever reason, he insisted that his car was to be fitted with a dickey seat in the boot compartment, which probably makes it the last series production car to be thus fitted. Whilst the Roadster could never compete with the Jaguar on acceleration and top speed it was a full five-seater compared to the XK120’s 2 seats. This made it a far more comfortable proposition as a long distance touring car.
Post-war steel shortages led to the Roadster, apart from its steel wings, being built from Birmabright aluminium alloy which was left over from wartime aircraft production. This meant that the car benefited from a robust tubular steel chassis that is even now still resistant to corrosion. The engine in the 2000 model provides 68bhp. and the three speed plus reverse, right-hand column gear change enables any middle seat passenger to sit without fear of getting in the way of a floor mounted gear change.
Some 2,500 of the 1800 model were built over the first three years making the 2000 TRA version even rarer with just 2000 being produced from late 1948 to end of 1949. For TV buffs, of course, the car will all ways be linked with the BERGERAC detective TV series. The colour of KLO 193 is Aubergine ( not Purple ) and is similar, though painted in the scheme actually before the Aubergine car driven by John Nettles, the lead character in the series. 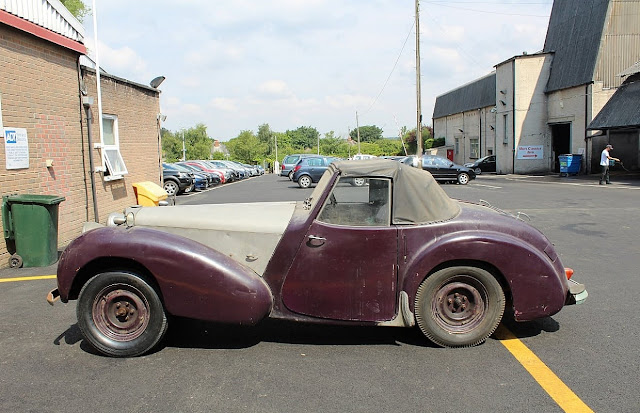 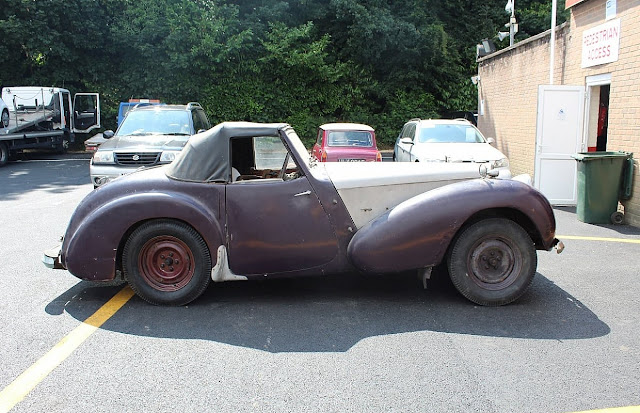