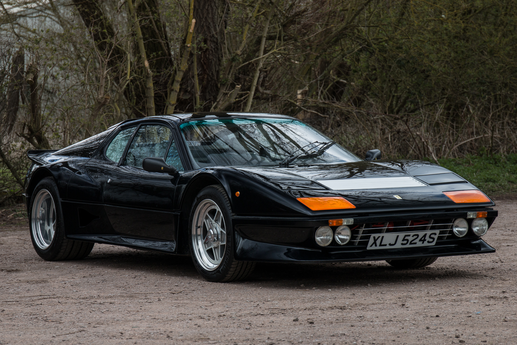 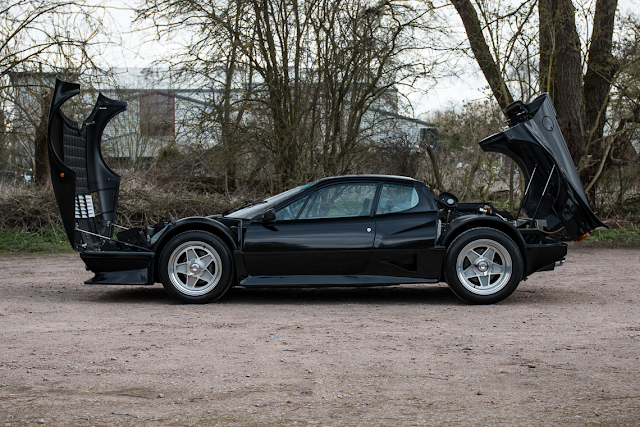 Having reasserted itself at the top of the 'supercar' hierarchy with the first 'Boxer'-the 365GT/4 BB-Ferrari went one better with its successor, the 512BB introduced in October 1976 at the Paris Auto Show.  For the new car, Ferrari abandoned its long-standing practice of denoting a model by the capacity of an individual cylinder and adopted the Dino-type nomenclature where '512' indicates 5 litres/12 cylinders. The increase in engine size from the original Boxer's 4.4-litres was made, not so much with increased power in mind, but to enable the 512BB to meet increasingly stringent emissions targets without a loss of performance. Displacement was increased by enlarging both bore and stroke, whilst in addition, the compression ratio was raised and lubrication changed from wet to dry sump. Quoted power remained the same (but may have been more truthful) at 360bhp, and torque was improved to 332 lb/ft at 5000rpm which, coupled with revised gear ratios, made the 512 much more tractable. Styling changes were subtle, with a small chin spoiler added to the nose, NACA ducts added in front of the rear wheels, larger rear arches to accommodate wider rear wheels, and finally, four tail-lights replaced the six on the 365.
The 1980s was an era of expression and excess, with car enthusiasts looking to step away from the norm and mechanically and visually (sometimes dramatically) modify their standard road cars. Naturally, this led to a significant rise in the number of small companies catering to this burgeoning demand. The desire to use your vehicle as an expression of your individuality wasn't confined to owners of mass-production saloons and one or two specialists emerged who became focussed on the high-end sports car, and even supercar, scene. One such was Emblem Sports Cars who dealt mainly in Ferraris and other exotica during the early eighties and were quick to embrace the needs of their, financially comfortable, customers who were in the market for top-end Italian hardware but wanted to look 'a bit different'. As Emblem's reputation grew, their customer-base included celebrities and Middle-Eastern royalty, many of whom would have their chosen vehicle delivered straight to Emblem from the factory. The cars initially used body kits supplied by Koenig Specials GmbH. but later went on to design and shape their own aluminium body parts. Such was the success of Emblem Sports Cars, that by the late 1980s the garage had been acquired by the, soon to be, Formula 1 world champion Nigel Mansell.
NB. Emblem Sports Cars Ltd continues in business as successful and respected Ferrari, Maserati, and Lamborghini specialists in Dorset, however, Don Standhaft, who ran the body shop at Emblem in the early to mid-eighties and worked on this very car, remains in business at DMark Concepts and would be happy to advise.
This UK-supplied, right-hand drive Ferrari 512BB was first registered in May of 1978. Originally delivered in Silver with grey leather this rare example found its way into the Emblem workshop and during the mid-eighties was colour changed to black and converted into the spectacular car we have on offer. Showing 39,700 miles and from long-term ownership, the car runs and drives but we understand requires some re-commissioning. The DVLA database shows the car's last MOT inspection was in 2015 at 39,512 miles when it passed with no issues. Forming part of a collection, the Boxer is now being offered from a deceased estate but, *unfortunately, at this time the history file for the car is not available*. The overall condition of the Ferrari appears excellent and it certainly seems to have been well-maintained and correctly stored while off-the-road. This, therefore, represents an opportunity to acquire a rare UK-supplied, carburettor 512 BB with scope to either recommission and enjoy the car's unique character or return it to its original factory specification.
Emblem conversions were well-engineered and considerably more subtle than some of their 'wilder' German contemporaries and having seen the car we were really impressed. Naturally, a pre-sale inspection would be advised to satisfy potential purchasers of any pending works required to return this head-turning Ferrari to daily use.
* A history file has now been discovered containing a documented and photographed complete restoration at marque specialist Terry Hoyle in 1995/7 at c.38,000 miles, this would explain the cars excellent appearance. The file also contains original Ferrari book packs, old MOTs, an account of all previous keepers, and some receipts of recent expenditure amounting to over £18,000. 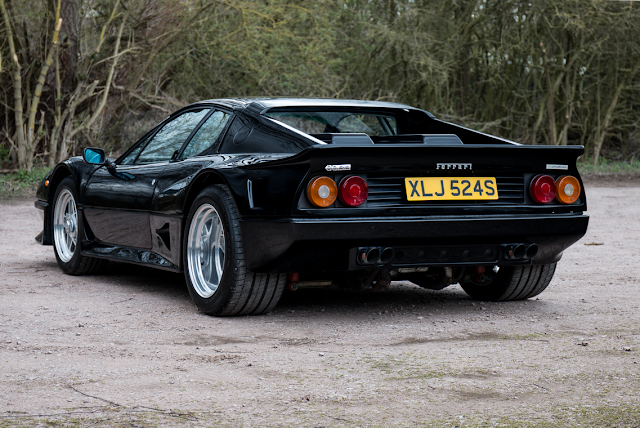