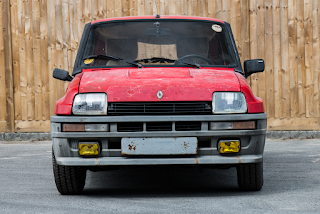 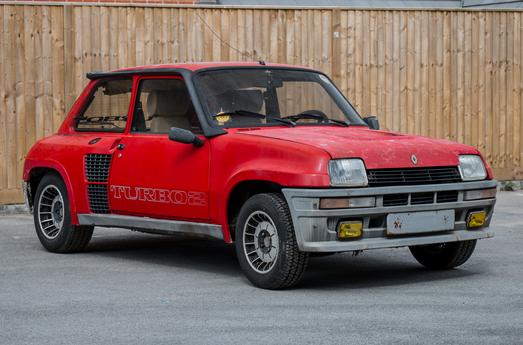 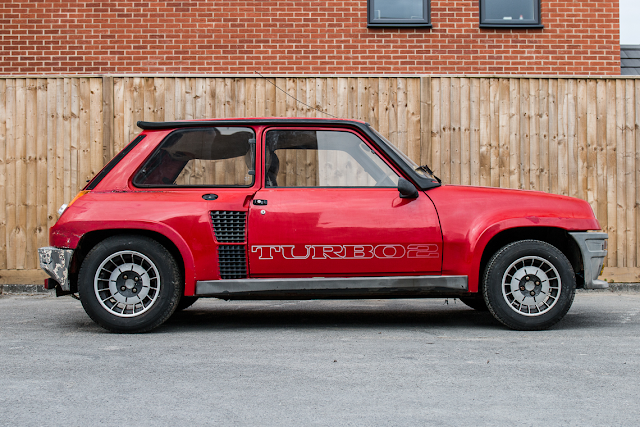 In 1980, Renault introduced their new R5 Turbo as a pure homologation special to compete in 'Group 4' racing and international rallies. The 5 Turbo was based on the production Renault 5 Alpine, but Renault Sport engineers scrapped the standard front-engine, front wheel drive layout in favour of a mid-engine, rear-drive setup. In 1981, Jean Ragnotti and his co-driver Jean-Marc Andrie won the Monte Carlo Rally outright for Renault, and the following year Ragnotti won the Tour de Corse. In 1984, 'Group B' homologation was sought for the Renault Maxi 5 Turbo to enable it to contest the World Rally Championship and the following year, Ragnotti added another Tour de Corse win with the Maxi 5 Turbo.  After the first batch of 400 road cars had been made to satisfy 'Group 4' homologation volume requirements, a second generation, known as the 'Turbo 2', was to follow.
This, extremely rare Renault 5 Turbo 2 Evolution Type 8221 benefits from being 1 of just 200 reported ‘8221’ series homologation cars that were built for the phenomenal Maxi 5 Turbo (group B). According to Peter Meaney, these very rare cars were subtly different with an aluminium roof, alloy doors, and uprated engine internals including the crankshaft, cylinder head, cylinder head gasket, and the rocker adjustment bolt. The turbocharger was also uprated and the cars were thoughtfully supplied with a 'Rebuild Kit' which included cylinder-liners, pistons, rings, pins, seals and gaskets. Power output for these '8221' cars does not appear to be documented anywhere but is reported to be in the region of 170/175 bhp.
This little Renault was delivered to its first owner by Radbourne Cars in London on October the 17th, 1985 and the original Bill of Sale is included with the car. He was to keep the car for nearly 32 years before disposing of it to John Price Rallying on 23rd April 2017. They, in turn, sold it to our private vendor, a keen collector of Renault 5 Turbos, on the 15th of May 2017 so the V5 shows a remarkable two previous owners from new.
Following long-term storage, ‘B669 EGT’ is now in need of a sympathetic restoration. It would appear to be very original and unmolested, probably as a result of its long-term storage and remarkably low ownership, unusual for these type of cars. John Price confirmed to our vendor that he believes it is a genuine Type ‘8221’ as it is matching numbers and is evidently fitted with the thicker head gasket of the homologation cars. We understand that the chassis number can be seen stamped into the metal work under the passenger-side carpet.
Accompanying this remarkable find is the aforementioned original Bill of Sale,  jack, rear parcel shelf, original wheels c/w TRX, the handbook, and some service history. A lack of space and more pressing projects is forcing a very reluctant sale from our vendor.
Such is the rarity of these cars, it is suggested that a correctly restored ‘8221’ could now be worth in the region of £100-£130k so this car, at this guide price, may well represent an unrepeatable opportunity to embark on an exciting, and hopefully, rewarding project.