Brought to you by Classic Chatter
www.classicchatter.co.uk 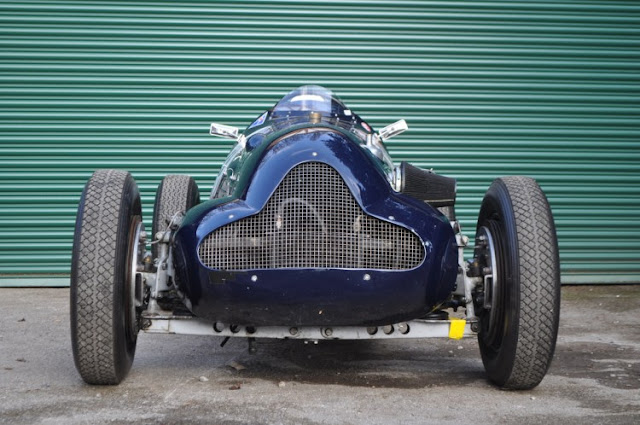 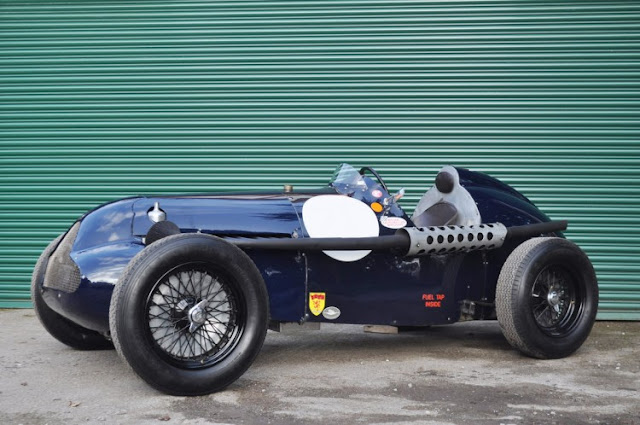 E.R.A – English Racing Automobiles Ltd was founded by Humphrey Cook, Raymond Mays, and Peter Berthon in November 1933 and established in Bourne Lincolnshire, within the grounds of Eastgate house the family home of Raymond Mays. Their ambition was to manufacture and campaign a team of single-seater racing cars capable of upholding British prestige in Continental European racing.
Henry Leslie Brooke built his single-seater racing car in 1936 based on a modified Riley Imp chassis and powered it initially with a 1100cc six-cylinder MG K3 engine. He entered a variety of UK based events during the 1937 season including the Imperial Trophy at Crystal Palace in October where it encountered the Maseratis (4CM) of Piero Trossi and ‘Johnny’, Luigi Villoresi (6CM) and Archie Hyde (8CM) along with the E.R.A’s of Raymond Mays, Arthur Dobson, B.Bira and Peter Whitehead.  As this was his first season in the car he had little success, resulting in a total revamp during the winter period. The following season emerging with an Andre Girling independent front suspension and a Zoller supercharger. It was competitive now and ran in the May JCC International Trophy Race at Brooklands followed by the June 28th London Grand Prix at Crystal Palace and on August the 27th the JCC 200 Mile Race at Brooklands before finishing fourth during the October Crystal Palace meeting.
Constantly searching for a performance edge, Brooke experimented with a variety of MG, ERA, Alta and Dixon-Riley powerplants throughout the 1938 and 1939 seasons and he took delivery of a blown 1.5 litre Alta engine in April 1939 and is also known to have run the car with also a 2-litre engine. He also competed in the 1938 South African Grand Prix and Albi Grand Prix using a force-fed ERA motor in the former race. The Brooke E.R.A took part in its last pre-war race at Crystal Palace before being laid-up during World War 2.
Emerging from hibernation and with the supercharged 1.5 litre ERA engine, Henry Brooke took part in the June 1946 Shelley Walsh hill climb meeting without bodywork fitted as his coachbuilder hadn’t finished it in time. In 1947 the Brooke was passed on to well-known racer George Nixon along with the Dixon-6CM unit and Nixon’s’ mechanics Tom and Fred Amos overhauled the car’s unborn 1750cc six-cylinder engine as Brooke had retained the ERA engine as a spare. Nixon had new bodywork and a twenty-five-gallon fuel tank fitted and made his competitive debut in the Brooke at the Isle of Man Manx Cup Race and the Nixon rose from third to first pulling away from the rest of the field to cross the finishing line in first place. 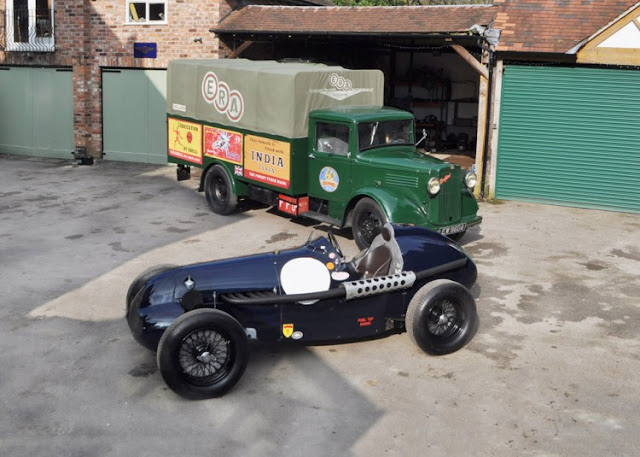 George Nixon then bought an A-Type ERA and passed the Brooke onto fellow racer and BRDC member Ken Downing in 1949.  Retiring from that year’s Manx Cup, Downing coaxed a third and two fourths in Goodwood Handicaps, seventh in the Lavant Cup and eighth in the Madgwick Cup and in the search for more speed, he fitted the Brooke with a 2 litre V12 Delage unit for 1950. The Brooke-Delage was not a success and later passed on to Derek Tasker and was still in Tasker’s possession eight years later, then briefly owned by Raphael Car Sales Ltd during the late 1960s until it was subsequently discovered in a heated Liverpool warehouse by Graham Baker of Holmes Chapel. Baker not only managed to track down Tom Amos but also made contact with Manx resident and BRDC member T. G. Moore both of whom helped flush out the Brooke’s history.
The car was restored in the early 1970’s and took part in various VSCC events the following decade before migrating to Belgium. The Brooke was reunited with a supercharged ERA engine during the early 1990s and its pre-WW2 independent front suspension assembly was refitted in 2000 at the FIA / HGPCA’s request. Driven by Barrie and Mark Gillies, it made UK appearances in 1994 and 1996 taking an outright win on the latter occasion at the Coys Festival of Speed and a second at Donington with successes at Goodwood but spent most of its track time on the continent participating in the European Historic Grand Prix (1999), Spa-Francorchamps (1999), Grand Prix de Pau (2001) and the European Historic Grand Prix at Zolder (2001). Outpacing a Maserati 250F and Ferrari Dino, Rod Jolley piloted the Brooke E.R.A to highly impressive third (wet conditions) and then a win on a dry track at the HGPCA’s Trofeo Alberto Ascari Imola meeting in 2002 before also setting the fastest time at that year’s Klausen-Rennen hill climb.
Since then, it has had circuit outings at the Historic Grand Prix Dijon in 2002 and the European Historic Grand Prix Zolder in 2004 while its hill climb assault at Arosa in 2005 was rewarded with a pre-WW2 class win and eighth place overall behind only seven slick-shod modern racing cars and was raced by Marcus Pye at the Silverstone classic before being purchased by Tim Metcalfe who campaigned extensively with success around the major circuits up until 2010 and whilst running in fourth place at Goodwood decided to retire due to an engine issue. 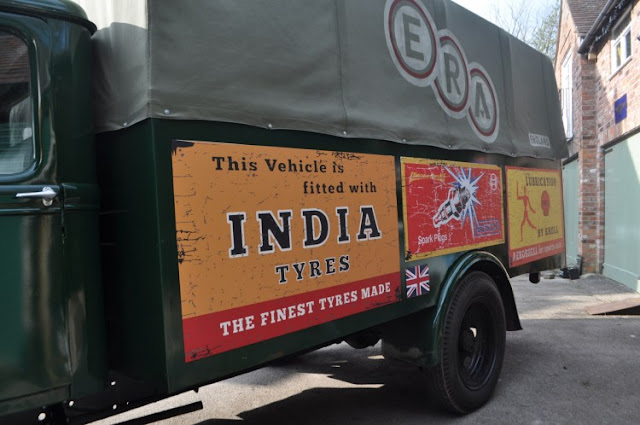 The Brooke has more recently had its 2 Litre blown E.R.A engine rebuilt for last year’s 2017 season where it campaigned at the Goodwood Revival. As the only Brooke E.R.A Monoposto in existence, it is very rare to see it come to the open market and the opportunity to acquire a historic racing car is very limited indeed.
We are proud to offer this example with a highly regarded provenance and extremely competitive Historic racing career from surely the most nostalgic golden era of road racing competition and piloted in the right hands the Brooke is sure to be winning again.
The Brooke ERA is offered with a substantial spares package including many valuable and rare parts that can provide the new custodian with an opportunity to build a spare ERA engine.
Perhaps most interesting is a current V5 Registration document along with the original beige log book that was issued when a 2 seat racing car was made in the fifties and parts of the chassis that was retained. The 2 seater ran with the Dixon Riley 6C engine and was road registered.  In addition is the recently restored 1936 Bedford WS ‘ERA’ transporter which was invited last year to the Goodwood Revival, the restoration was not finished in time and now completed it should be welcomed at any international event.
This is a fantastic opportunity to acquire a very historic competitive and established racer with a transporter and a substantial spares package.
( See Below ) 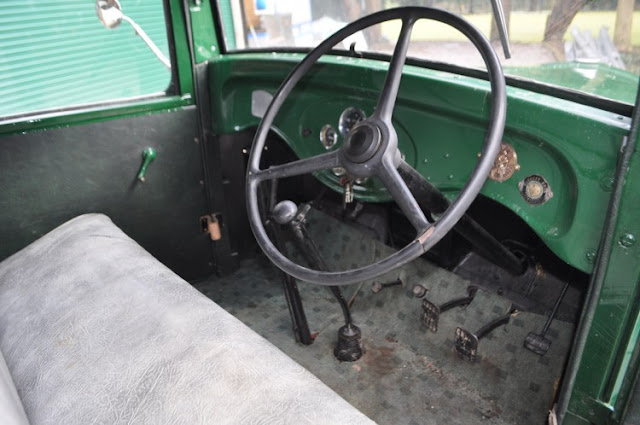 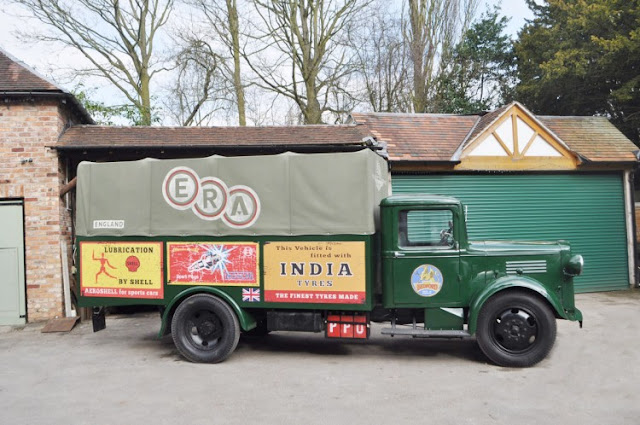