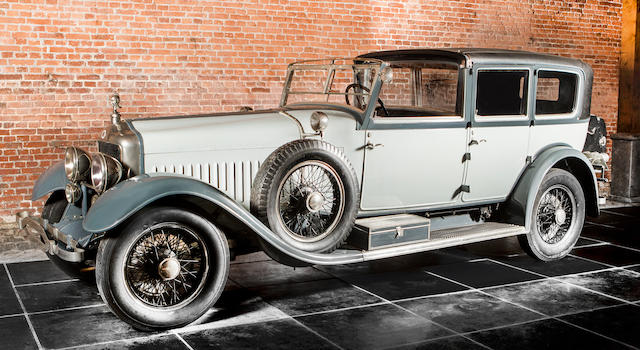 
-rare US delivery for this Minerva
20,000 original miles, it is believed
-Soigneusement maintained older restoration
-Longtemps in possession of the same owner


If Slowly recovering from the German occupation, Minerva began building large, luxury cars again in the 1920s, and enjoyed considerable success in the United States, where she found favor with film stars, politicians and industrialists. One of the keys to this success was Paul Ostruk of New York who ran a large brand agency at The Consolidated Foreign Motor Co. at the end of the 1920s.

A Czech émigré who arrived in America in 1908, he quickly learned the art of bodywork and the tastes and whims of a wealthy clientele. While working at coachbuilders AT Demarest, he met and later teamed up with Emerson Brooks. Brooks was a respected stylist who worked at another prominent coachbuilder, JM Quinby & Co, and was also treasurer of the Automobile Club of America, the New York institution that had been established at the beginning of horse-drawn carriages and had the largest and the best among its members. Brooks had an excellent address book and the partnership was strong because he had access to the elite for sales while Paul Ostruk was in charge of manufacturing their cars.

The first activities of the Brooks-Ostruk tandem consisted mainly in taking Pierce-Arrow or Packard chassis and making more European-looking bodies, often even covering the motif radiators of their own. The recipe was rather popular in an environment of individual bidding and when their custom-built cars made their debut at the New York Salon they were selling considerable sums.

Following this experience, Ostruk realized that he could buy Minerva chassis for a more reasonable price, compared to the prices of some competing American brands, and when they were dressed in the bodies he created, they proved to be very competitive. popular with its customers. The uncomplicated look of the Minerva, with their headlights and Art Deco goddess on the radiator have had an effect in the high society of the east coast! This gave birth to a Minerva agency, until the depression came and ended both companies. In 1923 coexistence with Brooks had ended and Ostruk founded Paul Ostruk & Co, New York.

Prefiguring the famous eight-cylinder AL, the majority of the Minerva Ostruk were built on the most powerful six-cylinder, like the AF shown here with its 5,343cc engine. Its body plate proudly displays "Custom Coach Work Especially Designed for Paul Ostruk Co. Inc., New York, USA," but what's hiding this wording is that at the time, most of its bodies were manufactured in a few One of the best coachbuilders in the New York area. Firstly Locke & Co. then later Raymond Dietrich and Tom Hibbard's LeBaron factory. Not surprisingly, they incorporated the latest in style and were of the highest quality.

Jacques Vander Stappen bought this AF from Seymour Rappaport of Teaneck, New Jersey about 30 years ago in May 1988, as stated in the very complete correspondence file provided with the car. At the time of the sale, Mr. Rappaport wrote to the buyer, "The car has 17,000 miles of origin, was driven only by a heater (sic) the first year and then only by me". He does not say who the driver was, but he must have looked like one of the typical Ostruk customers who had probably abandoned him after a modest mileage to move to another premium car brand.

Mr. Rappaport seems to have been the owner of the car in the 1970s, an old title already quotes him as owner in 1973 and a picture shows him out of a garage where she had apparently slept for more than 40 years. A note on the record details unimportant damage to the quarter panel, due to a water leak in the roof of the garage, as the biggest repair during the restoration of the car. During this restoration, the two-tone livery of the car in which it was found was taken back, returning it to its former glory of the 1920s. After the restoration and in possession of these last two owners, the mileage had risen to 20 000 miles, still very modest, according to what was displayed on the counter.

In the hands of Mr. Vander Stappen, the car continued to be pampered and shown in its private museum although in recent years it has not been used regularly and will need to be restarted carefully before any road use.

Clearly inspired by the European bodywork of the time, with obvious similarities to D'Ieteren's ALs from the same collection, Paul Ostruk's American interpretation of this style makes it an automotive treat for the eyes. The most appealing details of the car are the polished aluminum dashboard, the hammered door handles and the neat accessories. Its rear compartment has folding seats concealed behind marquetry panels and a plethora of wood paneling and trim surrounded by the most elegant gray fabric upholstery.

In the hands of its new owner, it will certainly be well received in all European or American elegance contests.