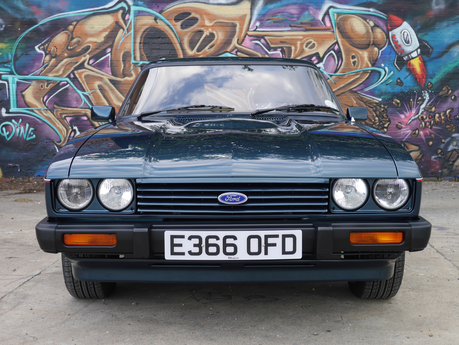 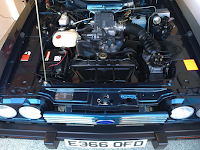 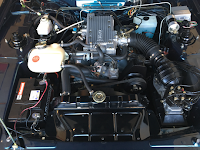 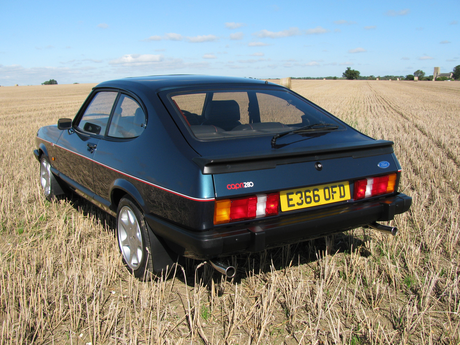 he best Capri 'Brooklands' we have ever seen! This car, affectionately known as Oscar, was bought by its current owner over 8 years ago on 30th March 2009 as an immaculate Capri 280 "Brooklands" with a genuine mileage of 12,704,(now showing 14,680). It has every MoT and tax disc ever issued for the car and a full dealer service history, including an immaculately presented and extremely comprehensive A4 binder full of further history and receipts. This Capri has had just three previous keepers from new.
According to our vendor, he bought the car "in truly exceptional condition with no corrosion or damage". It had never been repaired or painted, which was later verified by marque specialists 'Restore-A-Ford'. Since that purchase, the entire car has been professionally and fully re-finished (not restored) by the leading Capri experts, Restore-A-Ford. The subject of a money-no-object refinish designed to produce a car that was correct in every detail and, possibly, even better than when it left the factory. This whole process, (including the strip down showing the car to have no corrosion or repair damage) is comprehensively documented with hundreds of full-colour photographs.
The entire underside of the car, including the wheel houses, were taken back, by hand, to bare metal and then zinc etch-primed, and stone chip coated, before being painted in ICI two-pack clear over base. All underside components were refinished too in the correct finish and colours, and the dampers and engine were paint matched to the original finishes. All the fixings, nuts and bolts were stripped and re-zinced with the correct 'gold passivate' factory finish, only again, to a much higher standard than the originals. 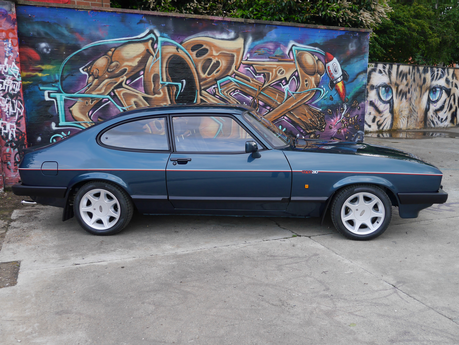 New brake drums, cylinders, shoes and fitting kit were used, whilst the original Calipers were fully stripped and rebuilt with stainless pistons and fresh, factory-correct, zinc coating on the calliper bodies. New EBC dustless brake pads were used along with new discs and fitting kit. These were connected to stainless Goodridge flexible brake hoses that are black sheathed to look factory original with the whole brake system running EBC silicone brake fluid. This perfect base was further complimented by every rubber bush on the car being replaced in favour of Superflex poly replacements.
A brand new, period correct stainless steel Janspeed exhaust system was fitted and bespoke stainless link pipes were made in order that the factory manifolds could be retained. Those manifolds were then plasma-ceramic coated. Further to that, rather than re-use the mild steel manifold studs, an engineering company was commissioned to make a full set of studs in marine-grade stainless steel and brass nuts to suit. The engine starts and runs beautifully and uses a full set of silicone hoses that mimic the originals (included) while the system also benefits from waterless coolant, which along with the silicone brake fluid are lifetime fluids. 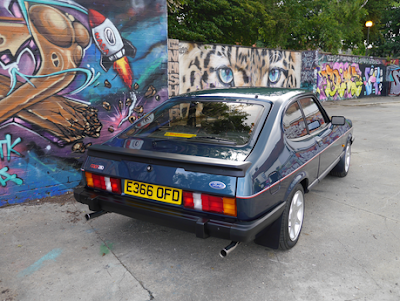 In addition, the original Pirelli Cinturato tyres (included) were replaced with new Pirelli Cinturato's that closely mimic the original tyre pattern while giving modern standards of safety and grip. The interior of the car was simply re-fitted, the seats have never been repaired or Connolised and all of the trim is original, present and in superb condition.
While the bare shell was still on a rotisserie, the whole upper side of the car was prepared for paint. The original paint was still very good but as the pictures show this was still meticulously prepared. Care was taken that the areas of any stone chips were taken back to bare metal to ensure that the new paint would not be laid on even the tiniest imperfection.
The quality of the paint finish is immediately obvious and is almost flawless, topped off with a perfectly applied, Ford authorised, stripe kit. New, old stock, mud flaps and brackets were sourced and stainless 'pucs'" were commissioned by the owner to fit between the arch and the bracket to protect the paint. The bumpers were repainted in the correct satin black with all fixings re-finished as per the rest of the car.
In an unrelenting pursuit of perfection the original supplying dealer sticker, tax disc holder and number plates were correctly reproduced. As well as Restore-A-Ford conducting a full Concours refinish and rebuild during 2010 costing £10,481, the current owner has spent approximately a further £4,000 on new (old stock) or bespoke items to make this 280 car the best-finished example we have ever seen.
Everything on the car has been prepared to the highest standards and to original colour and specifications. Everything mentioned above is backed by invoices in a very impressive history folder. The car comes with all the original handbooks and plastic sleeve, as well as genuine main and spare Ford keys including the fully functional touch key. If, like the current owner, you want the ultimate Mk3 Capri, correct in every aspect but hand built and finished to an exceptional standard, E366 OFD really is the only option.
More pictures can be found here showing the refinishing process from strip-down through to Concours re-fit: 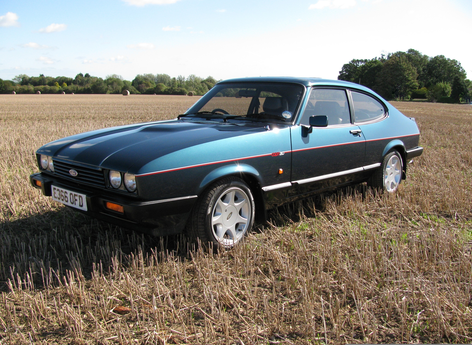