The Capri Mk. II, when replacing the Mk. I, was launched by Ford on 25th February 1974 and was in production until the end of 1978. The updated model received a significant change in the design in the form of changing the rear part of the vehicle body. It became more shallow improving the visibility out of the rear glass, as well as significantly increasing the capacity of the luggage compartment. Ford chose to make the new car more suited to everyday driving with a shorter bonnet, larger cabin and the adoption of a hatchback rear door. This made it the first Ford to feature a hatchback - at a time when the hatchback was becoming increasingly popular in Europe after first being patented by Renault in the mid 1960s. By the standards of the mid 1970s, the Capri Mk. II was a very well evolved vehicle with very few reliability issues. The Capri still maintained the large rectangular headlights, which became the easiest way to distinguish between a Mk. II and a Mk. III.
Originally registered on 8th November, 1974, this Capri 3000 Ghia is finished in blue with grey interior. The striking colour combination is complimented by a black vinyl roof-a common fitment in the 70's and 80's. The vendor is an avid car collector and is only selling this Capri due to lack of suitable storage space. The engine note and performance of Fords three litre Essex engine is impressive even by today's standards, when mated to a manual gearbox such as GJF 83N is, suddenly this becomes a really interesting and fun car to drive. A history folder containing most of the previous MoT's accompanies this matching numbers Capri and confirms the mileage to be correct. Supplied with a V5C registration document and a current MoT test certificate valid until 12th March, 2018, we strongly recommend interested parties to view this car in person to see for themselves the quality of this highly desirable Capri Ghia. 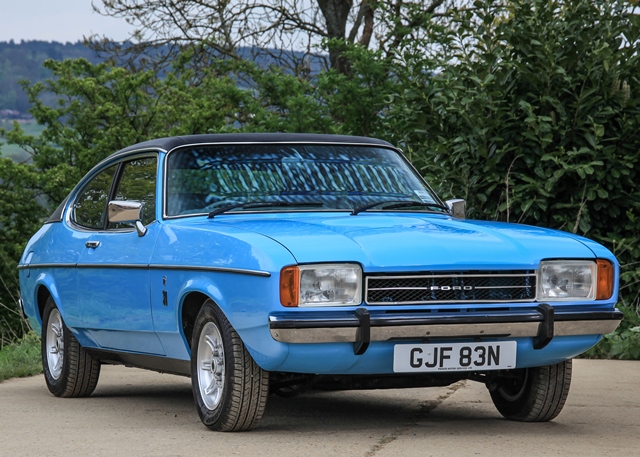 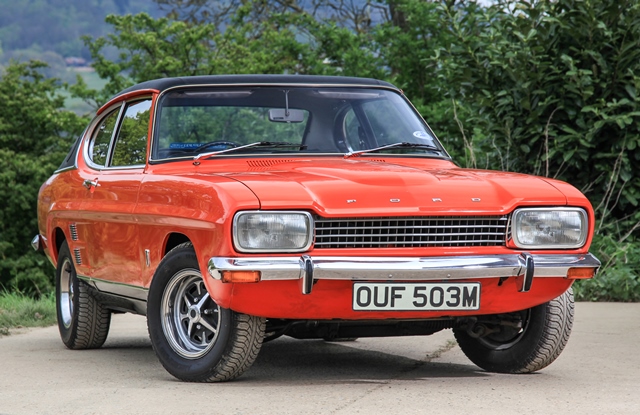 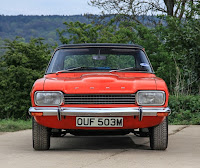 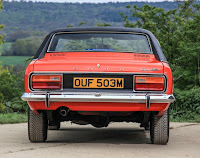 The Ford Capri is a fastback coupé that was manufactured from 1969 to 1986, designed by American Philip Clark, one of the main designers of the Mustang. Using the mechanical components from the Mk. II Cortina and intended as the European equivalent of the Ford Mustang, the Capri went on to be a highly successful car for Ford selling nearly 1.9 million units in its lifetime. A wide variety of engines were used in the Capri throughout its production lifespan and although the Capri was not officially replaced by any Ford model, the second-generation Probe was effectively its replacement after the later car's introduction to the European market in 1992. Ford revised the Capri in 1972, it received new and more comfortable suspension, enlarged tail-lights and new seats. Larger headlamps with separate indicators were also fitted.
This Capri is in very original condition and, as such, has won a number of awards. The vendor is a very knowledgeable Ford enthusiast and is only selling OUF 503M due to lack of suitable storage space. This Mk. I facelift Capri has a magnificent service history with invoices dating back to when she was new; this is clearly a much loved and cherished example. The red paintwork is in very good order showing no signs at all of any corrosion and the black interior appears to be totally original and is in superb condition. The 1600cc Pinto engine is a very robust unit and is capable of producing a swift performance and we are advised she drives as good as she looks. This 43 year old matching numbers Ford has only had two previous keepers and is supplied with a V5C registration document and a current MoT test certificate valid until 13th March 2018. It is rare to see a Mk. I Capri on the road and even rarer to see one in this condition. 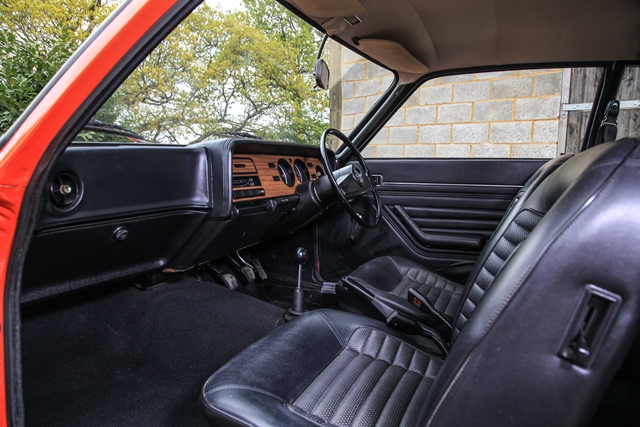 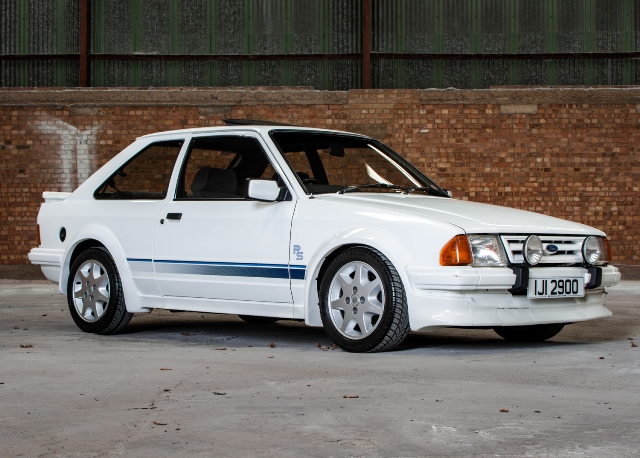 The Ford Escort RS Turbo was based on the three-door Ford Escort saloon and was supplied in a Diamond White body colour only. The engine fitted to the RS Turbo was a 1600 CVH unit modified to suit the higher loads and the application of a turbocharger. Computerised fuel injection and engine management incorporating turbocharger boost control were also fitted.
Aesthetically, the RS Turbo was given a distinctive sporty appearance with a  body coloured front grill, bumpers and aerodynamic aids. On the tailgate, an XR3i spoiler (also body coloured) was fitted together with 'RS Turbo' decals. The interior was trimmed in a combination of Monza and Cashmere fabrics and XR3i-type Recaro LS bucket seats were fitted as standard. Production was limited to only 5,000 examples and many were modified in period for racing. 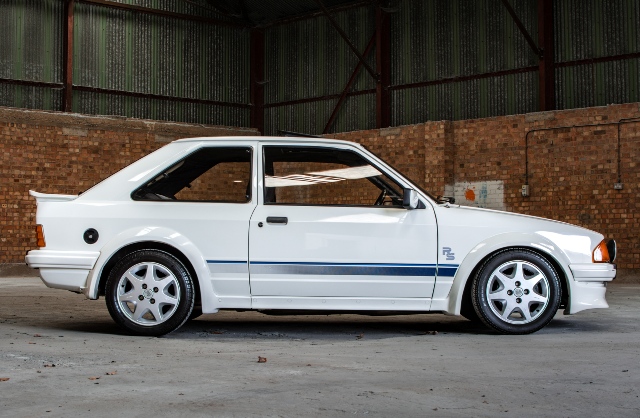 This delightfully original and stock example of the Ford RS Turbo has been sourced from a Ford fanatic with six other fast Fords still in his stable. Supplied new to Johnston King Ford dealership in Omagh, County Tyrone, Northern Ireland and still wearing dealer number plates, tax disc and original dealer sticker in the rear window, this example, until recently, did not leave the town of Omagh for its entire life with just three previous owners. Still boasting its original Ford radio, all dealer booklets and owner's manuals this car has never been modified and kept garaged its entire life seeing little or no wet weather, the interior proves testimony to the careful ownership presenting exceptionally given the age. 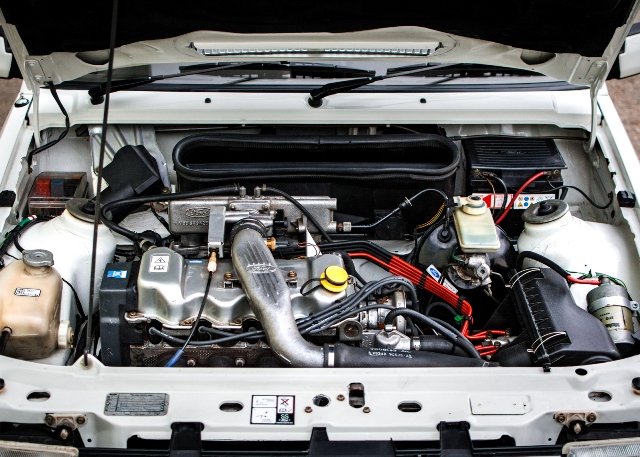 This is a genuine opportunity to purchase every school boy of the 80's dream car and a rare opportunity to find one in such unmolested condition. An MoT test certificate until April 2018 accompanies the history file and viewing is certainly highly recommended.﻿ 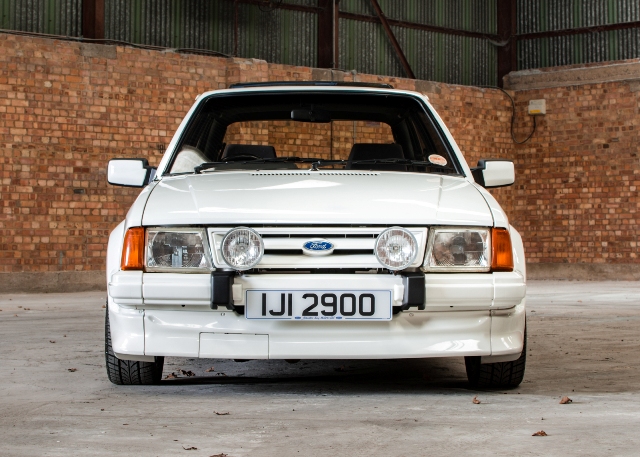 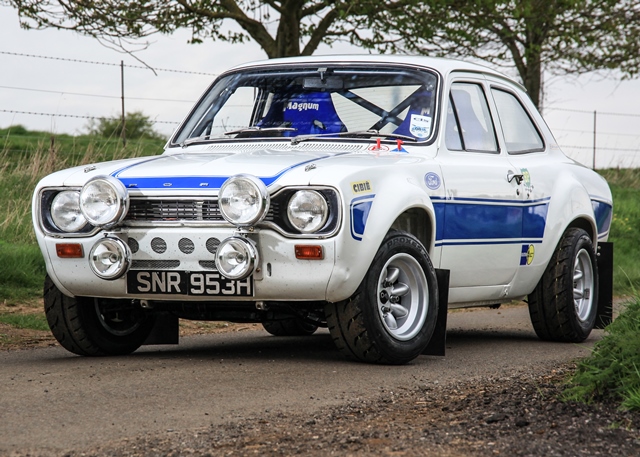 The Ford Escort was introduced in the United Kingdom at the end of 1967 making its show debut at the Brussels Motor Show in January 1968. The Escort was a commercial success in many parts of Western Europe but nowhere more than in the UK, where it was the national best seller of the 1960's. In June 1974, less than six years after the car's UK introduction, Ford announced the completion of the two millionth Ford Escort, a milestone unmatched by any Ford model outside the USA. The Mk. I featured contemporary styling cues in tune with its time; a subtle Detroit-inspired 'Coke bottle' waistline and the 'dogbone' shaped front grill - arguably the car's most famous stylistic feature.
This Escort Mk. I has been fully rebuilt by the vendor over a ten year period. The bodywork has been stripped down to bear metal, any corroded areas cut-out and re-fabricated as necessary; the car has been fully seam welded. Wheel arches have been added to accommodate the Group 4 wheels and tyres. The front suspension has Bilstein fully adjustable struts and a quick-rack has been fitted along with four pot calipers and vented discs. The rear suspension has fully adjustable gas shock absorbers, Atlas axle with alloy brace and a limited slip 3.75 ratio differential. This is all powered by a Cosworth double overhead camshaft 16 valve, 250bhp turbo unit which is mated to a Cosworth TS gearbox. Internally, she has been fitted with a FIA bolt-in roll cage, vertical hydraulic handbrake, FIA plumbed in fire extinguisher and an alloy fuel tank in the boot. This is an impressive fast-road specification Escort and one that has had no expense spared in achieving the final result. The vendor is reluctantly selling her to fund a building project. This imposing Ford, which is exceedingly impressive in the way she looks, sounds fabulous and drives just as well. 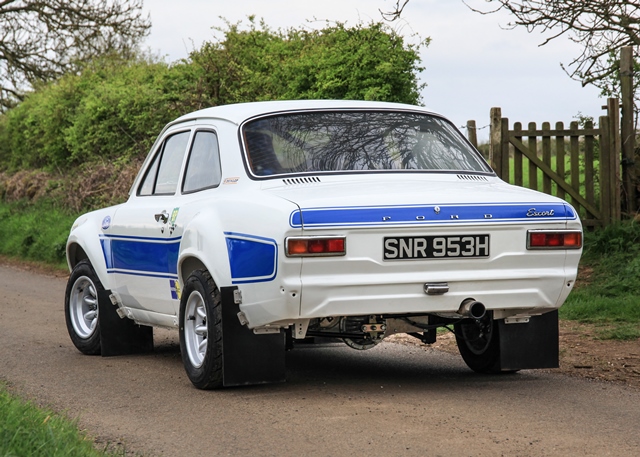