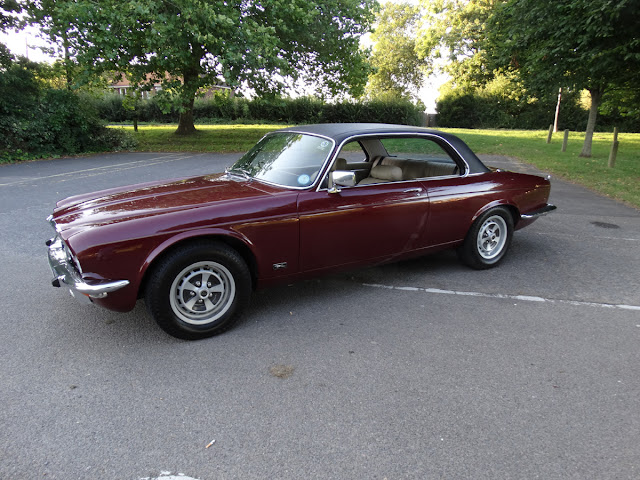 1977 JAGUAR XJC 5.3 COUPE
The XJC is a rare two-door version of the XJ6 four door saloon. It was the last Jaguar to be designed by Sir William Lyons. In 1969, Sir William took a reject 2.8 litre RHD XJ6 body shell and fashioned it into the XJC. It was tried with both 4.2 and 5.3 engines with both versions becoming known as XJ33 or XJ34, depending on which engine was on board at the time. The XJC was first shown to the public in September and October of 1973 at the London, Paris and Frankfurt Motor Shows. It was announced that both 4.2 litre (6 cylinder) and 5.3 litre (12 cylinder) versions would be available for the 1974 model year.
The XJC we have for sale here is a 1977 car that the current owner purchased five years ago from a Jaguar enthusiast and retired senior engineer at British Aerospace. He had owned the car since 1989 and had overseen extensive restoration works, including works carried in the 1990s by David Scott Moncrieff Ltd and subsequently by David Manners Ltd in 2002 at a cost of just over £40,000 (receipts included with the sale). The total restoration effectively amounted to a complete rebuild of the vehicle. The owners objective with the restoration was to produce an improved and updated version of the XJ coupe, which he felt Jaguar ought to have built but didn’t, and which incorporated many of the improvements which appeared in the later Series 3 XJ saloons.  For example the opportunity was taken during the restoration to install a replacement 5.3 litre engine with an HE cylinder head, GM 400 automatic gearbox, stainless steel exhaust system and Series 3 external mirrors. The car is not therefore a matching numbers example but does benefit from improved fuel consumption
The vehicle was little used following its restoration and had covered only 62,300 miles when the current owner acquired it in 2011. Since then the car has still only been subject to fairly light use and current mileage stands at around 69,000. The present owner had the car re-commissioned at JD Classics and has spent over £16,000 on it in the last five years. It is described as being in generally very good condition with excellent bodywork. Taking part in the Jaguar Trophy at the Holyrood Palace Concours d’Elegance last September is testament to the quality of the car. Offered for sale with a current MoT, this is a fine example of an elegant long distance tourer that has been lovingly restored and updated.
SOURCE: http://www.coys.co.uk/thoroughbred-vintage-at-fontwell-house