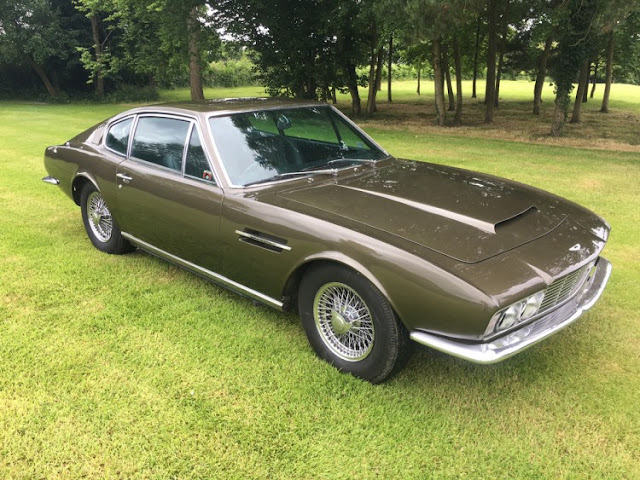 Introduced at the October 1967 Motor Show, the DBS was the successor to the famed Aston Martin DB6, although the two ran concurrently for three years. Styled in-house by William Towns, the aluminium-bodied four-seater had a sharper, more Italianate look than the curvaceous DB6 but still exuded road presence and looks mighty impressive even today. Longer, wider and more luxurious than the DB6, the DBS employed a platform-type chassis with independent suspension all round: wishbone and coil spring at the front, De Dion with Watts linkage at the rear. Autocar judged it superior to the preceding DB6 in many areas, offering four full-sized seats in addition to transformed handling and road holding courtesy of the new suspension and standardised power steering.
Originally designed to accept an all-new V8 engine, this was not ready in time for the car’s launch, so it was fitted with the legendary four-litre DB6 engine instead. As with the latter, the twin-cam engine was available in standard or Vantage tune – the former producing 282bhp at 5,500rpm on triple SUs, the latter 325bhp at 5,750rpm with triple Webers and hotter cams.
A five-speed ZF gearbox was standard with three-speed automatic transmission optional as was Brico fuel-injection. Performance was not quite as rapid as the DB6, the new car carrying extra weight, but the DBS was still no slouch: in its road test of a DBS Vantage, Motor recorded 141mph with 0-60 and 0-l00mph reached in 7.1 and 18.0 seconds respectively. Production of the DBS stretched between September 1967 and April 1972 during which time only 70 RHD Vantage examples were produced. Continuing Aston’s famed 007 connections, the DBS was used by George Lazenby’s James Bond in the 1969 film ‘On Her Majesty’s Secret Service’.
This early DBS Vantage, one of only 70 RHD Vantage specification examples, was despatched on the 20th September 1968, destined for the dealer H.R.Owen of London. The Aston was bought by Mr. David Lewis, a solicitor based in Portland Place, London W1, and assigned with his personal registration plate, HLF 1.
The Vantage was specified in Olive Metallic paint, with a Black leather interior. Pleasingly the Aston was also fitted with power assisted steering, Fiamm horns, a Motorola radio, black carpet and Avon tyres all round.
Mr. Lewis clearly loved his Aston dearly, keeping the car until 1985 whereby he changed ownership to a newer Jaguar XJ-S. The DBS was then owned by Fulton Engineering, a Toyota agent based in West London, before being passed in 1990 via the trade to the current vendor.
Showing just 4 owners from new, and part of a small collection for the last 26 years, the DBS has been used very lightly and dry stored when not in use. The current mileage reading is 52,000 miles, which is believed to be correct. The vendor has driven only a few hundred miles in his ownership, indeed from the MoT history we see the car has covered approximately only 1000 miles in the last 30 years. The DBS has just benefited from an overhaul to the braking system, with the fitting of replacement servos.
Finished in its original shade of Olive metallic, and with the original Black leather interior, this DBS displays a wonderful patina not possible in restored examples. The Aston is offered with a UK V5 document, British Motor Heritage Trust Certificate, owner’s manual, current and a number of previous MoT certificates, and older invoices for maintenance work.
This is a lovely, original example of a rare Aston Martin, and one which we feel represents a wonderful proposition for serious collectors.
SOURCE: http://www.coys.co.uk/cars/1968-aston-martin-dbs-vantage
SELECTED BY:
CLASSIC CHATTER