UNDER THE HAMMER
Chosen by: JEG @ CLASSIC CHATTER

Today's Auction choice will be coming to auction at Brightwells next sale on 2nd of March.
With prices of the Ford Capri rising now seems to be the ideal time to purchase
"The car you've always promised yourself". If you have some time on your hands perhaps our choice today will be of interest, needing some tlc - this could be just the way to get a car that can only appreciate in price.in the future. 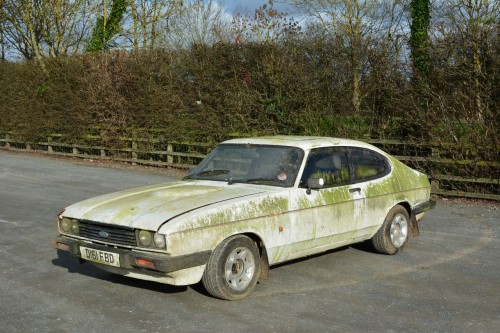 Lot Number: 26
Estimate: £3,000 - £4,000
Reg Number: D161 FBD
Engine Capacity: 2792cc
Chassis Number: WFOCXXGAECGA91658
Engine Number: GA91658
‘The car you’ve always promised yourself,’ announced Ford upon launching its new Capri in 1969, a liberating two-door fastback coupe they hoped would generate the same following in Europe as the Mustang had garnered in the US.
Mechanically, the European Pony Car was based on the more mundane though capable Cortina, with a live axle on leaf springs at the rear and McPherson struts at the front. The bonnet, which was long enough to accommodate at least a V8, housed a number of engines – depending on exactly how big that promise to yourself had been.
Initially Capris were powered by the 1.3 or 1.6-litre four-cylinder Kent engine or the Cologne V6 2.0-litre. In September of 1969 a range topper was introduced in the form of the 3.0-litre powered by the Essex V6. With around 138bhp and 173ft lb of torque, the 3.0-litre was capable of 0-60mph in eight seconds and a top speed of 124mph.
Restyled three times in its 33-year life, the Capri always remained close to its roots. The initially exaggerated belt line would smooth and the impression of almost scalloped sides would flatten out. By the MkIII of 1978, Capri sales were in decline, but the model was still a roomy and individual coupe.
In 1982, Ford decided to launch a new fuel injected power plant and dropped the 3.0 V6 in favour of the all-new 2.8 injection Cologne V6 power plant, with a claimed power output of 160bhp and a top speed of 130mph through the existing 4-speed gearbox This was swiftly upgraded to a 5-speed, and along with an interior facelift, it allowed Ford to keep the car in production for a couple more years than originally forecast.
This example is a very late Series III 2.8 Injection first registered in May 1987, and one of the last built. It is finished in white with contrasting grey half vinyl and velour Recaro seats and 7-spoke RS-style alloy wheels similar to those fitted to the Special Edition of the 2.8 Injection MkIII.
The car can be described as a ‘farm-find’ having been discovered by the vendor languishing in a farm yard in Dorset where it had clearly been stood for many years, as you can tell by the layer of algae. However, once fuelled and connected to a new battery, it promptly came back to life! On arrival at Brightwells the car not only started promptly but also drove around our yard with surprising ease, much to the amazement of onlookers. Underneath the aforementioned green grime, the car appears surprisingly solid apart from the obvious areas evident in the photographs.
The interior is original, bar the after-market gear knob, although the original knob is also present. The car has little documentary history with it, apart from 9 old MOTs dating from 1993 when the car had covered an indicated 65,330 miles, until November 2004 when the odometer reading was 5,291, leading us to presume that the 108,190 miles currently displayed is more than likely genuine.
Clearly in need of more than a quick scrub up, this is nonetheless a straightforward project that should amply reward the remedial works now required 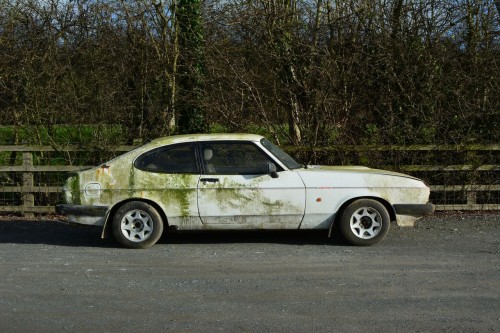 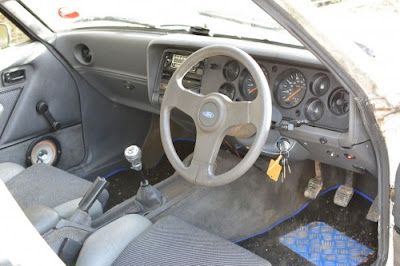 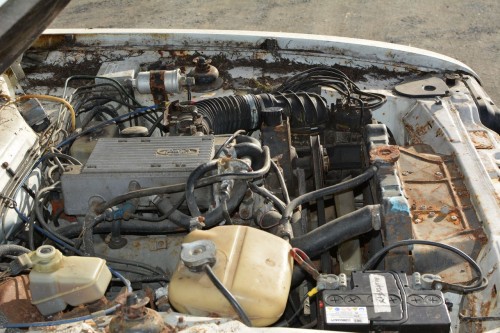 CHECK OUT OUR WEBSITE AT: www.classicchatter.co.uk
.
Posted by jeffharris at 15:25