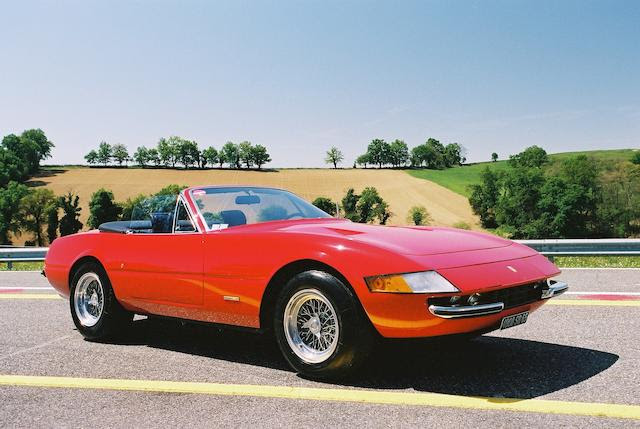 1970 FERRARI 365 GTB/4 "DAYTONA" SPIDER
(Conversion by Bachelli et Villa)
1970 Ferrari 365GTB/4 'Daytona' Spyder Conversion by Bachelli and Villa
Chassis no. 13351
Engine no. 251 B346
The ultimate expression of Ferrari's fabulous line of V12 front-engined sports cars, the 365GTB/4 debuted at the Paris Salon in 1968, soon gaining the unofficial name 'Daytona' in honour of the sweeping 1, 2, 3 finish by the Ferrari 330P4 sports prototype at that circuit in 1967. Although there had been no official open-top version of its predecessor, the favourable reception of Luigi Chinetti's 275GTB-based NART Spyder no doubt influenced Ferrari's decision to produce a convertible Daytona. Again the work of Pininfarina, the latter was first seen at the Paris Salon in 1969, deliveries commencing in 1971. Although the rear end had been extensively reworked, so successful was Pininfarina's surgery that it was hard to credit that the Daytona had not initially been conceived as a spyder.

The most powerful two-seat, road-going GT and the world's fastest production car at the time of its launch, the Daytona was capable of over 170mph (274km/h). When production ceased in 1973 some 1,300 Berlinetta models and 123 spyder convertibles had been made. Of the spyders, only 25 were built to European specification, seven of which were right-hand drive, most of the remainder being delivered to the USA. Today they are among the most sought after of Ferraris, combining rarity with aggressive looks, awesome performance, and the thrill of top-down motoring.

Ferrari's limited production run of Daytona spyders left many would-be customers disappointed, a situation which led, inevitably, to a number of coupés being converted, including that offered here, chassis number '13351'. The conversion was carried out in Italy in 2000 by recognised specialists Messrs Bacchelli and Villa (Carrozzeria Auto Sport) of Bastiglia, the interior being re-trimmed by another renowned Ferrari specialist, Luppi of Modena. A European specification model supplied new to Milan in April 1970, '13351' is presented in Rosso Corsa with black leather interior, and has a full set of Borrani wire wheels. Other noteworthy features include air conditioning, two sets of tools and modern electronic ignition, the latter discreetly concealed to preserve the engine compartment's original appearance.

The current vendor purchased the Daytona at Bonhams' Monaco Sale in May 2004 since when the engine has been rebuilt by Toni Auto in Maranello, the work being carried out in 2008. This beautiful example of one of the most capable Grandes Routières of recent times is offered with French Carte Grise, Contrôle Technique and a letter from Carrozzeria Auto Sport.