"CROSSING THE BLOCK"
In Association with

A bit of an American muscle for you today from the decade of Glam Rock that was the1970's, remember the great TV shows of the decade "The Sweeney", "Love Thy Neighbour", "Top of the Pops", the dawn of Abba, Brotherhood of Man plus later in the decade the shock of Punk in music and in wider culture.
While we had the Ford Capri & the likes the US had this.
1974 PONTIAC FIREBIRD 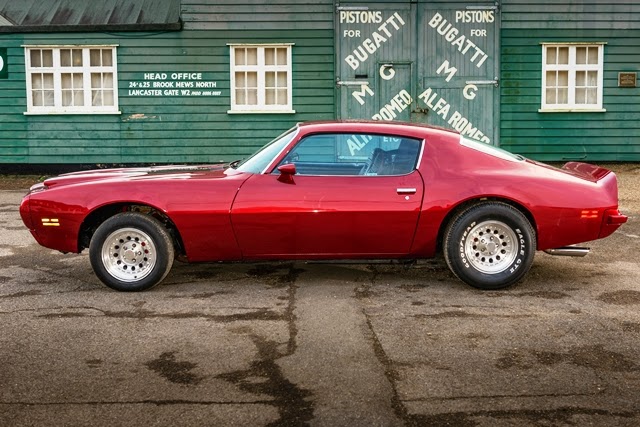 The Pontiac Firebird was built by the Pontiac division of General Motors between 1967 and 2002. It was introduced the same year as its platform-sharing cousin, the Chevrolet Camaro. This coincided with the release of the 1967 Mercury Cougar which shared its platform with another pony car, the Ford Mustang. The Pontiacs were, for the most part, powered by various V8 engines of different GM divisions. While primarily Pontiac-powered until 1977, Firebirds were built with several different engines from nearly every GM division until 1982 when all Pontiac engines were dropped in favour of corporate units.
This stunning 1974 Pontiac Firebird is fitted with a new 400bhp General Motors fast burn, 385 engine coupled to a new Tremec TKO500 fiv- speed manual gearbox and has had over £45,000 spent on performance tuning and restoration work including a new Holley 750 double pumper carburettor with Speedflo braided; Aero couplings and fuel meter and a Holley mechanical petrol pump. Also included  is a new ceramic headers by Doug linked to a Flomaster American Thunder 2½inch exhaust system, A McLeod 160 tooth flywheel with a McLeod 11½inch clutch and Inland Empire driveshaft's. New Be-Cool Racing cooling system including aluminium radiator, cooling fans and thermostat are fitted and the brakes have been up-rated to Moroso red brake callipers with 11½ inch slotted brake discs, new master cylinder and brake servo, copper brake pipes and a Lokar Tranny fitted handbrake. The front suspension has been overhauled with Hotchkis Springs, Eldelbroch shock absorbers, Fatman tubular wishbones and Hotchkis 1⅛inch swaybar. The rear suspension has a Competition Engineering subframe with matching traction bars, OER multileaf springs with Munroe air shock absorbers. The car has been fitted with a new GM painless muscle car wiring loom. This Firebird has recently been repainted in maroon and re-trimmed in black; correct to the year by Baldassare of Bedford. It is supplied with a V5C registration document, an MoT test certificate and a comprehensive history file. This superb muscle car drives, sounds and looks incredible.