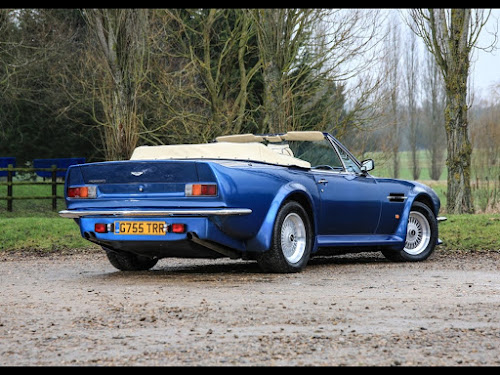 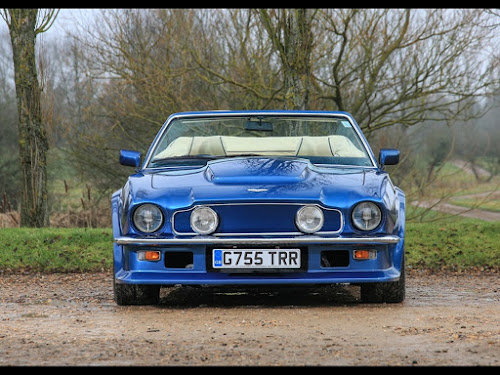 This car can be viewed in person from 14th to 18th July 2020 at our the auction site, Windsorview Lakes, Datchet, SL3 9HY
The Aston Martin V8 Vantage was hailed as ‘Britain’s First Supercar’ for its 170 mph top speed when introduced. Straight-line performance was staggering, with acceleration from 0–60 mph in 5.3 seconds, one-tenth of a second quicker than the Ferrari Daytona, its main competitor of the time, and a 0-100mph time of 12.7 seconds. It became the world’s fastest accelerating production car due to the tuned version of the existing 5,340cc engine breathing through a quartet of 48mm Weber carburettors. Valves and ports were enlarged and the camshafts changed, resulting in an estimated maximum output of around 375bhp. With the optional 'X-Pack' power was increased to 432bhp, a significant upgrade.

Stunning from every angle, the X-Pack Volante represents the pinnacle of decades of hand-assembled Aston Martin production. Readily distinguishable from the standard car by virtue of its blocked-off bonnet scoop, blanked air intake, front chin spoiler and lipped boot lid, this car is a stunning combination of beauty, luxury and power and is as rare today as it was when it first saw the light of day.


This exceptional V8 Vantage Volante with X-Pack is one of only 30 cars ever produced mating the 580X engine to the smooth automatic transmission to create the ultimate coach built Grand Tourer. Finished in Salisbury Blue with Magnolia hides piped blue, the car is complemented by a dark blue mohair roof. One of the very last cars ever built, chassis number 15804 has been with our vendor for a staggering 21 years and comes with an extensive history file documenting its life and care.


The build sheet from April 1989 shows that this example was originally specified as a left hand drive car built for British Motors Monaco however investigations tell us that this example didn’t find its way to Monaco and was instead sold to its original owner a Mr. K. Tandon of Mayfair, London who purchased and registered the car in his company name in November 1989 after the Aston Martin factory at Newport Pagnell had stripped and converted this car back to right hand drive, an invoice of which sits within the history file.


Mr. Tandon stored the car at his home, together with a number of other classics, until he sold the car in 1991 having covered just 450 miles. The new owner, Mr. Leniham from Sheffield, was another car enthusiast with a small but not insignificant collection and he kept the car for just over a year during which time he had it serviced at Newport Pagnell. In February 1992, the car was sold to Mr. Oliver of Oliver Valves Ltd in Cheshire, who again had it factory serviced in April 1993. In 1996, after three years, our vendor purchased the car via Old Town Trading Company for the sum of £75,000, and ownership has remained with him until this day both in the UK and six years in the Costa Del Sol, Spain where he resided until recently.


With just 40,685 miles on the clock; the majority of which having been covered by the current owner, this example has been maintained regardless of cost. The fabulous history file includes a fully documented maintenance history down to receipts for tyres, and the mileage is warranted by the inclusion of every MoT test certificate since 1995 including the current one valid until February 2021. The car also comes with the original tool kit and complete Handbook Wallet Pack and is fitted with a sports exhaust together with a Kenwood satellite navigation system - the originals are also supplied should the new owner wish to return it to its original state.


In production for only three years, the V8 Vantage Volante is one of Aston Martin’s most iconic models and is regarded as the ultimate example.


Viewing this exceptional car in person is highly recommended, and it certainly warrants the attention of collectors and drivers alike.


The health and safety of both our customers and team remains the utmost priority, we are therefore operating to Government guidelines throughout viewing and auction day. 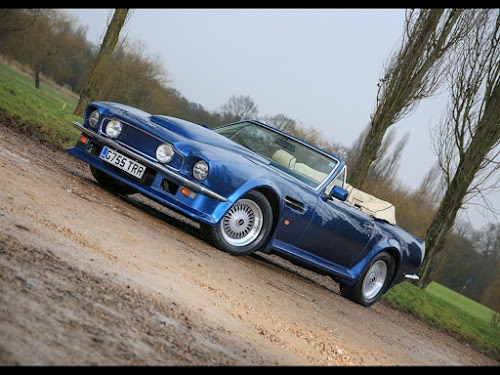 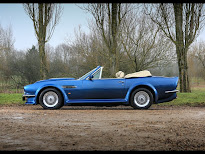 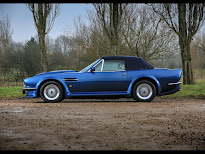 SOURCE: https://www.historics.co.uk/buying/auctions/2020-07-18/cars/ref-82-1989-aston-martin-v8-vantage-volante-x-pack-convertible-mrp/
Disclaimer:  Whilst Classic Chatter ("we") attempt to make sure that the information contained in this website is accurate and complete, we are aware that some errors and omissions may occur from time to time. We are not able, therefore, to guarantee the accuracy of that information and cannot accept liability for loss or damage arising from misleading information or for any reliance on which you may place on the information contained in this website. We highly recommend that you check the accuracy of the information supplied. If you have any queries about any information on our website, please contact us at  jeff.classicchatter@mail.com

CLASSIC CHATTER
Powered By Dragons
Posted by jeffharris at 19:01