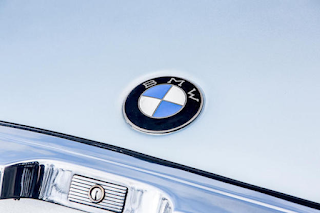 The John Surtees CBE, one owner from new


Registration no. 22 GKN
Chassis no. 70067
*Bought for John Surtees by Count Domenico Agusta

Bonhams has been truly privileged to have been selected by the family of the late, great, multiple World Champion motorcyclist and racing driver, John Surtees CBE, to offer this most outstanding, extremely rare (and intensely gorgeous) BMW 507 Coupé, which he owned from new for effectively 70 years.


Within the documentation file accompanying this mouth-watering motor car is a confirmatory copy letter dated February 10, 1959. The original was on the headed notepaper of 'Meccanica Verghera SpA', manufacturers of MV Agusta motorcycles, to whom Surtees was contracted at the time. The text reads:

This letter is to confirm that on the 12th January 1957, we presented to you an amount of DM 27,115.00 for you to buy a BMW type 507 Touring Sports car which was intended as a gift to you in appreciation of your winning the Motorcycle World Championship in 1956 for our company in the 500cc class.

"We want to mention here the fact that the above World Championship in the 500cc class was the first ever achieved by this company, and the above was but a token of our sincere gratitude.


The same documentation file also includes a draft text written by the great World Champion himself, detailing the history of this magnificently well-preserved and immensely attractive BMW. John Surtees:

"My father was doing a little business with the AFN company who were the BMW and Porsche, importers. One day I went with him and was given the opportunity of trying a 356 Porsche. That again was a superb car. I experienced my first ever spin in it as it handled somewhat different to the Jowett.

"Fast forward to my first year with the MV Agusta team 1956. At the time I had reverted to a Ford as it was more convenient because of all the equipment I would carry. The season went well with my winning my first TT and, whilst lying in a German hospital in Stuttgart following a crash in the 350cc race at Solitude, I also became World Champion. Count Agusta was delighted and, perhaps thinking that my terms hadn't been that generous, he said 'We must buy you a prize, do have a think'.

"I went away and did some serious thinking. There were a number of cars that quite excited me but I had done nothing about it. In 1957 at the start of the season I went to a race event at Hockenheim in Germany. There I saw my old friend and BMW development head Alex von Falkenhausen. What interested me was the beautiful car that was standing alongside the BMW pit. Alex saw me looking at it and said to take it for a run. So I jumped in and drove it all around those woodland roads which then existed at Hockenheim, and liked what I saw. Alex, when returned, introduced me to one of the sales directors who said 'John these cars are very very rare and if you wanted one we would have to allocate it specially and would advise you'..." (once it would be ready for delivery). "After a few days they advised me I could have one possibly in July and told me the colour, interior and specification it had to be. I was excited..." (John independently described how BMW's earnest German sales staff described the car's colour in a rather dull way as being "...just silver-grey..." whereas "...it is really more a lovely, subtle, silver-blue.'')


His written account continues: "I went to Count Agusta and said I knew what I would like. It was a 507 BMW. His first words were how much? To which I replied £3,200. Both of us..." (were) "...managing to converse in the Italian I was developing. There was a hesitation so I went in and said 50%, and we had an agreement.

"The MV Agusta team was based at Gallarate which is just on the side of Milan airport at Malpensa. I could, therefore, take a route through using the Brenner and dropping into Munich where the BMW..." (company) "...was based. I collected my car and drove it carefully back again through to Italy. I did the trip a number of times as well as the trip to England.

"When the car was fully run in I asked to speak to Alex von Falkenhausen. I said to him the car was not like his. 'It goes up the mountains too slow and down the mountains too fast'. He replied "Yes I do have more horsepower in my car and can improve yours as well, we will do that. On brakes, it is an opportune moment because we are working with Dunlop in England on introducing disc brakes and you can be part of that development programme".

"It was therefore agreed that I should take my car to Fort Dunlop and they would fit the car with four-wheel disc brakes. I think it is the only 507 in the world with this arrangement.

"I carried out a lot of development running until I had provided the information required. In relation to speed, when the engine performance had been improved, the car had been fitted with a full under-belly fairing which gave it something like 10-15 mph more top speed. The most speed I ever did in it was on the Gallarate to Milan Autostrada - with the help of a little downhill section and good weather the car went over the 140 mph..." (mark).

"I continued to run the car taking it to most of the Grand Prix..." (races) "....I went to normally with my teammate John Hartle. To get more luggage space I removed the hood from inside the hardtop so that I could have the back shelf available We have since replaced the original hood.

"As I said, the car was used continuously up until I joined Ferrari. On joining them at the end of 1962 Enzo Ferrari came out of his office after we had made an agreement and said 'German car, not possible' I thought I was going to be given a Ferrari. But that didn't happen, (although) I did end up with a 330 GT..." (for which Ferrari docked the price from John's driving fee! – see below).


"I (finally) drove the BMW home and basically laid it up in the garage. My father had a very good friend he did business with who lived in Barnet and had cafes in both Dunstable and just off the Great North Road. He had previously hired from me one of the rather special motorcycles I had built. Dad called me and said 'Mr Greenfield would love to have the BMW'. I was very dubious but on checking where it was going to be and where it was going to be driven, I agreed. So for a short time the car was hired to Mr Greenfield who treated it extremely well and never in any way pressed it. He just had (the) pleasure, as with the motorcycle, of driving between his various venues with special pieces of equipment.

"When I moved and had more accommodation I took the BMW back and it has been in my possession ever since."


John concluded this wonderful personal memoir of BMW 507 '22 GKN' as follows, describing it as:


"A car with many memories and one where purely its original specification makes it very very special."


Which really says it all, and we can most sincerely now commend this wonderful automotive objet d'art to the market.


The late, great John Surtees CBE was the most competitive man that most figures within world-class motorcycle and motor racing would ever recall having encountered, raced against, or worked with. John Surtees was just unusually intensely driven. And it was this intense drive and focused dedication that earned him no fewer than seven World Championship titles on motorcycles, followed by his 1964 victory in the Formula 1 Drivers' Championship for Ferrari, and his 1966 CanAm Championship win for Lola-Chevrolet.


His 1958 season with MV Agusta had been simply staggering - 23 consecutive race wins plus both the 350cc and 500cc crowns – after which he was invited to BBC TV's 'Sports Personality of the Year' event where he found himself seated beside Ferrari's new Formula 1 World Champion, Mike Hawthorn.


John would recall how: "Mike told me 'Four wheels stand up on their own better than two, have a go at four'!" The owners of both the Aston Martin and Vanwall works racing teams were seated at that same table and they wholeheartedly supported Hawthorn's suggestion. John Surtees consequently test-drove both sports and Formula 1 Aston Martins and an ex-Moss F1 Vanwall right here at the Goodwood Motor Circuit. For 1960 he was contracted exclusively to MV Agusta for motorcycle racing, but Count Agusta would only enter the World Championship-qualifying events, leaving John forbidden from riding other makes in between. "So I decided to try my hand at racing cars instead...".


And the rest of his career tale – as recounted elsewhere in this catalogue – is familiar history. When he signed with Ferrari for their 1962 Formula 1 and World Championship GT and sports car racing programmes, 'Il Grande John' was returning to an Italian factory team. "The Old Man..." (Mr Ferrari) "...always liked racing motorcyclists because he used to say 'They have fire in the belly – I like my team to have a fire in the belly'. But when I first visited him in Maranello the car I was driving..." – as related in his own surviving text, above – "could have blown the deal!"


He would preserve, maintain and adore this much-loved – and much admired - BMW 507 until he sadly died, aged 83, on 10th March last year. And he used this graceful Grand Touring car extensively, often driving over the Brenner and Simplon passes on his way to-and-fro between England and Italy, revelling in its long-legged gait and considerable contemporary level of cockpit comfort and refinement. Hearsay recollections from BMW Classic advise us that as a special sports version – augmented to director von Falkenhausen's instructions – the V8 engine of John Surtees's '22 GKN' offered here provided around 165bhp thanks to its compression ratio having been raised to 9.0.1, while the unit was also fitted with larger 42/38mm diameter valves and larger 36NDIX carburettors. The engine reputedly also featured a special high-lift camshaft "with leverage increased to 1.70:1, instead of the 1.53:1 of the production engines to give higher valve lift".


As related in his written account, owning this gorgeous BMW was also a two-edged sword. When he signed for Ferrari in late 1962 and arrived at the Maranello factory in his beloved BMW, Enzo Ferrari declared that he could not possibly drive a German car while racing for his team. He must have a Ferrari instead! In conversation, John would tell the story like this: "Delivery of one was agreed and I thought 'Ooh, this is good' - but when I got my first pay cheque I found The Old Man had had the price of the new car deducted from my fee!"


Today – this one-owner-from-new BMW 507 is not only a beautiful example of BMW's most rare, elegant and refined sports car from the 1950s, of which only 252 were ever made, it is in fact unique.


It is very much 'The John Surtees BMW 507': a uniquely-connected one-owner beauty, now being offered for the very first time at public auction directly from the estate of one of the world's most revered and successful sportsmen - an eight-time World Champion, no less. Bonhams' Festival of Speed Sale offers a genuinely once-in-a-lifetime opportunity for a true connoisseur to add John Surtees' Germanic V8 beauty to his or her collection – absolutely a jewel in the crown. 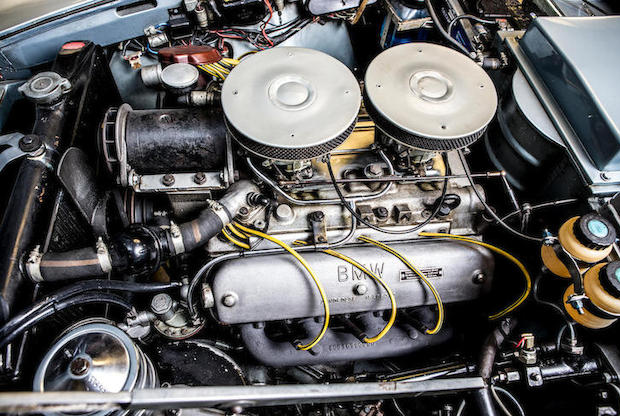 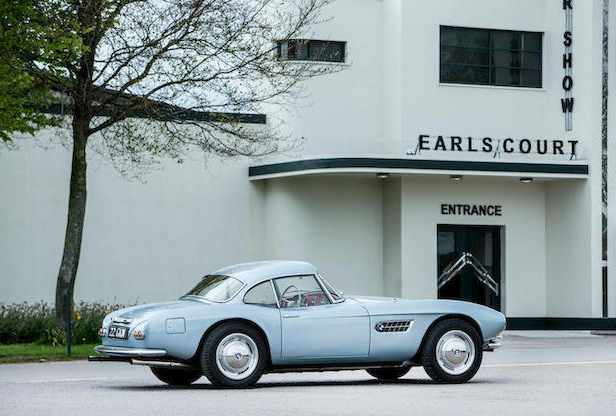