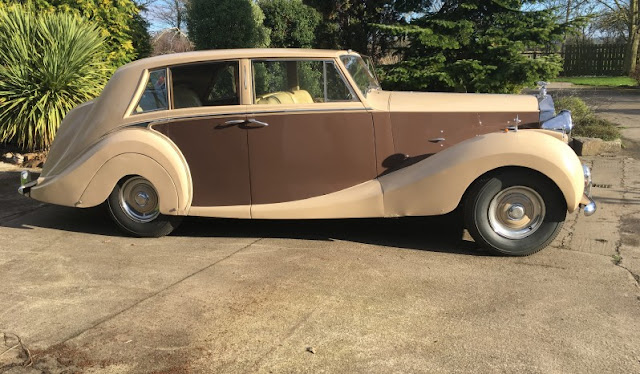 1952 ROLLS-ROYCE SILVER WRAITH LIMOUSINE
Reg. no. NVO 91
Chassis no. WVH 9
Engine no. W9H
The Silver Wraith was the first post-war Rolls-Royce and they were made from 1946 to 1958 as bare chassis\' at Rolls-Royce\'s former Merlin engine plant, their Crewe factory. It was announced by Rolls-Royce in April 1946 as their smaller car; the size was chosen to be in keeping with the mood of post-war austerity.
The first cars had an entirely new 127 inch wheelbase chassis which differed considerably from that of the pre-war Wraith and it was much more rigid. The new chassis had coil sprung independent front suspension, which required a very rigid chassis to function properly, and at the rear, conventional semi-elliptic springs and a live axle. The braking system was a hybrid hydro-mechanical system with hydraulic front brakes and mechanical rears using the mechanical servo similar to that of the pre-war cars.
NVO 91 has coachwork by Hooper – Teviot style – of which 51 were made. We are informed that the Science Museum has significant archives for the Hooper Coachbuilding company. The car has an electric glass division, and within the past year, has had the front brakes rebuilt. NVO91 also has the big-bore engine i.e. four and a half litres and was built for and shown at the Motor Show stand (EC15) at Earls Court in 1952. Originally maroon with a cream pinstripe, it\'s first owner was a Mrs S. Oxley; a subsequent owner in 1954, was the pioneering plastic surgeon Sir Archibald McIndoe, to whom a statue has been erected in East Grinstead. He was famous for the work he performed on servicemen who had been burned, restoring their lives to near normal. His RAF patients were often referred to as the ‘guinea-pig club’.
Subsequently it was owned by Stuart Fortune who was the Club Chairman of the Rolls-Royce Enthusiasts’ Club 1967-1975, records indicate that he sold the car around 1989/1990. The car was purchased by the treasurer of the RREC Great Western Section in 1995 and it was his pride and joy. In his care it has travelled many miles and been to many events, the car featuring in many publications including numerous RREC Bulletins and ‘Classic Rolls-Royce’ by G. N. Georgano in 1983 (reprinted 1989).
In the history file are four separate valuation reports the latest in 2016 at £40,000 - 47,500, copies of the Rolls-Royce build cards, copies of the correspondence between Hoopers and RR, cuttings about Sir Archibald McIndoe, numerous receipts, various old MOT certificates, an old folding logbook, the handbook, various reference books and a V5c. 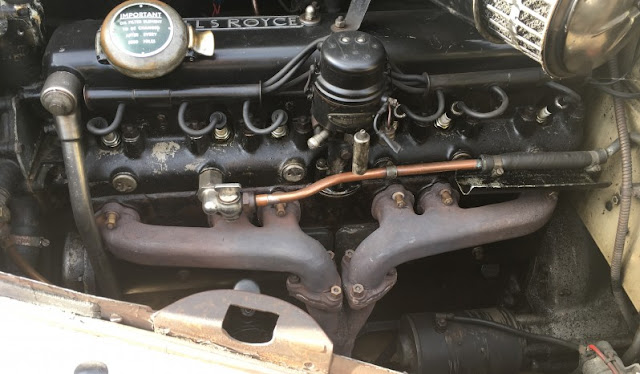 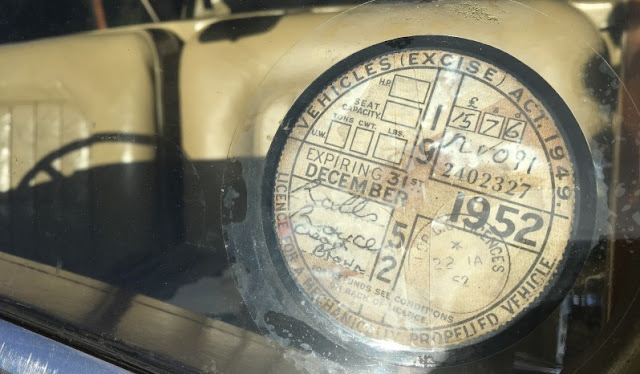 Disclaimer:  Whilst Classic Chatter ("we") attempt to make sure that the information contained in this website is accurate and complete, we are aware that some errors and omissions may occur from time to time. We are not able, therefore, to guarantee the accuracy of that information and cannot accept liability for loss or damage arising from misleading information or for any reliance on which you may place on the information contained in this website. We highly recommend that y check the accuracy of the  information supplied. If you have any queries with regard to any information on our website, please contact us at  jeff.classicchatter@mail.com