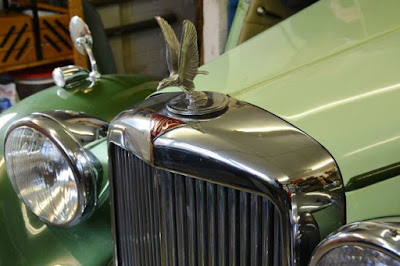 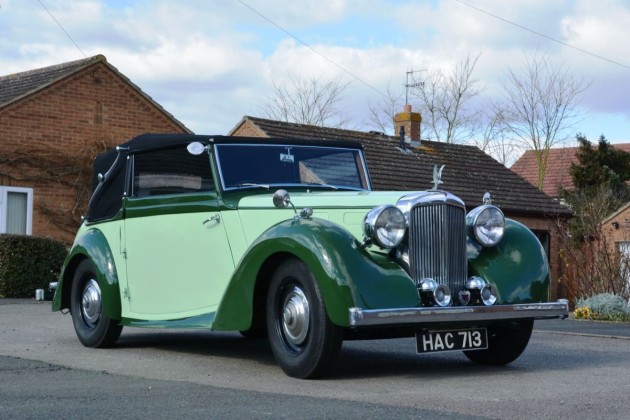 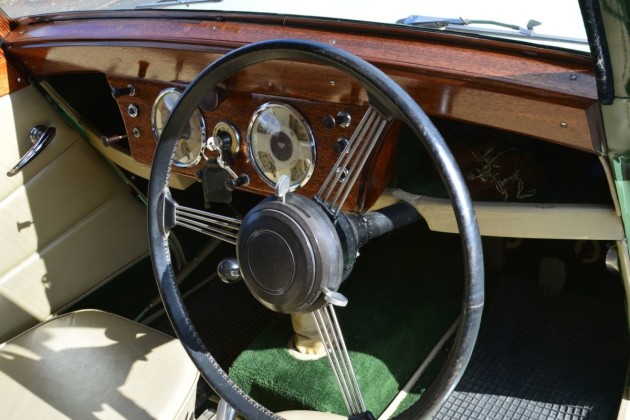 The Alvis TA14 was the first car to be produced by Alvis Cars after World War II. A development of the pre-war 12/70 chassis but wider, lower and stiffer, it offered an improved ride, sharper handling and more interior space.
Suspension was by semi-elliptic springs front and rear, with Marles cam-and-peg steering and Girling rod-actuated brakes, while the 12/70’s troublesome wire wheels were replaced with stronger discs. Power came from a slightly enlarged 1,892cc version of the 12/70 engine driving through a four-speed synchromesh gearbox.
With 65bhp on tap the TA14 was good for 75mph and was well received in the press. Autocar called it “sure-footed and lively with a degree of all-round refinement that is impeccable,” while the car’s “excellent tractability, well-spaced gear ratios and powerful brakes” also came in for praise. The Motor was impressed by its “flexible engine, roadholding and silence” while Motor Sport paid tribute to “a rather beautiful unit gearbox.”
Some 3,300 examples were sold before it was replaced by the TA21 in 1950, of which well over half were Mulliner-bodied saloons, the rest being two-door drophead coupes bodied either by Tickford or Carbodies.
Dating from February 1948, this particular TA14 is one of only eight made by Richard Mead Coach Building of Dorridge, using Tickford-built MG VA bodies which were left over after MG stopped making the cars in 1939. The MG body was an excellent fit on the Alvis chassis and made a very elegant car, particularly with the Tickford three-position lined hood.
The car comes with a good history file including details of most previous owners and photos of a body-off restoration to concours condition by George Oakes in 1988/89. The vendor acquired the car in 2007 from a Judge Lloyd who had owned it for the previous six years. The Judge had lavished much money on the car at Tim Walker Restorations of Aylesbury in 2002/03 including a full engine rebuild with unleaded head, new radiator, crown wheel and pinion, brake overhaul, rebuilt starter motor and dynamo plus numerous other jobs with bills for over £8,500 on file plus an album of photos to document the work carried out.
According to correspondence on file, the Judge then used the car on tours of Scotland, Wales, Germany, Norway, France and Switzerland, covering well over 10,000 trouble-free miles. In 2002 he also arranged for his car to be reunited with the only other survivor of the original eight (chassis number 21021) at an Alvis Club meeting in Cumbria, again documented in the history file.
During the vendor’s 11-year ownership the car has been improved still further including a bare metal repaint, a new wiring loom, new canvas hood and new carpets. Appearing to be in excellent condition throughout, it started promptly and ran beautifully as we moved it around for these photos on what was a bitterly cold winter’s day. It comes with a useful quantity of spares including a distributor, fuel pump, clutch plate and a plain radiator cap to put in place of the Alvis mascot when parked unattended.
Documentation includes the aforementioned invoices, photos and correspondence plus 11 old MOTs back to 1997, an old green log book from 1964, copies of the Alvis factory build sheets, an original owner’s handbook plus much technical literature relating to the model.


Only reluctantly for sale due to the advancing years of the vendor, this exceedingly rare and handsome drophead is sure to prove a great talking point at any show and is no doubt smart enough to win some trophies should the fortunate new owner feel so inclined.