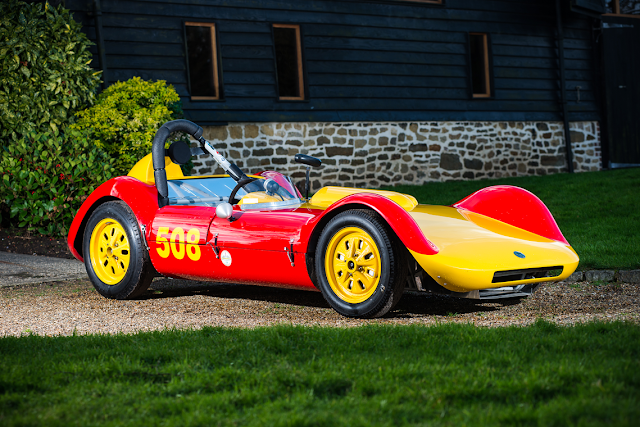 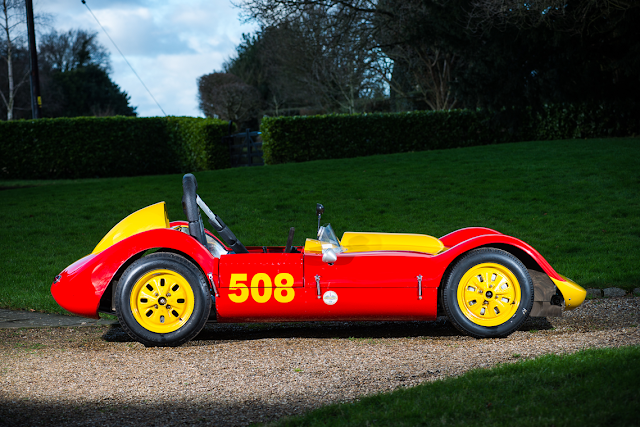 Club racing in the early fifties was cheap and cheerful, with many 'specials' constructed by innovative enthusiasts looking for maximum performance at minimum cost. One such enthusiast was Frank G. Nichols. Having left the Army with a gratuity and some mechanical skills, he bought a small garage business at Westham in 1947. This was successful and he moved to another bigger garage in London Road, Bexhill where there was a good local following for motorsport
After gaining experience in a Lotus VI, he ordered a 'CSM' from a Mike Chapman (no relation to Colin), achieved some notable successes particularly at Goodwood, and attracted attention from like-minded enthusiasts. He was shrewd enough to realise that this potent little car could be further improved and marketed, and very soon he was able to produce a similar chassis. At one meeting at Goodwood, a French enthusiast, impressed with the speed of Frank's car commented “Elle Va” which translates as 'she goes' and shortly afterwards the Elva Sports Car Company, based in Hastings, was formed. Unfortunately, a few years later, financial problems directly attributable to the failure of their U.S. distributor and a large number of their 'Courier' road cars being impounded overseas, resulted in Elva being forced into liquidation and being sold to Trojan in 1961. Production was relocated to Rye, Sussex, and again in 1966 to the main Trojan factory in Croydon. In 1965 Ken Sheppard from 'Customized Sports Cars' of Shenley, purchased Elva from Trojan, but sadly production ended in 1968.

The ultimate front-engined, drum-brake Elva sports racer was the small displacement Mk.V. and thirteen examples were produced. They were powered by the Coventry-Climax FWB single overhead camshaft engine, and they were remarkably competitive, outhandling Chapman's Lotus 11 at most circuits here, in Europe, and the United States.

This particular Elva Mk.V is chassis number 100/101 and was the eleventh car built. Unusually for an older racing car, the History File is pretty comprehensive from new staring with the car being imported in the USA by Elva distributor Stephens Motors and purchased by R Davis. Mr Davis owned and raced it for several years with some success even winning the SCCA Cal Club 'D' championship in 1964.
It then became the property of its second owner, Mr G Clark, who raced it for a number of years before storing the car prior to being purchased in 1988 by Mr B McCaw. Mr McCaw owned the car for almost a decade before, in turn, selling it to Don Kruzan, head of the Elva Register, who apparently sold it back to the previous owner in 2002.
At this point, a full restoration was commenced and over the next four years 'Michael Clifford Vintage Racing', a British sports racing car specialist near Connecticut, was tasked with returning the little Elva to full health. The car needed a complete nut and bolt rebuild and was returned to factory original specification fitted with a correct 1220cc Climax engine. Since restoration, the car has only seen occasional use at the Monterey Historic Races in 2007 and the Pittsburgh Vintage Grand Prix in 2008 and 2009.
The Elva was purchased by our vendor in 2011 with the intention of obtaining FIA papers and competing at Goodwood, however other commitments have taken priority and, sadly, it has not turned a wheel in anger since.
Despite the car having had little use prior to purchase in 2011, with just 6 hours of running time on the car, engine and gearbox, we would recommend having the car professionally checked over before use and most obviously the fitting of a racing seat and harness. Whilst the owner believes it would obtain FIA papers if fitted with a period-correct full-width windscreen, we cannot confirm this.
This Elva looks fabulous in Red and Yellow with distinctive yellow Elva web wheels and has clearly been well restored and prepared. This is a rare car, nicely rejuvenated, and with Goodwood eligibility and front-running capability, at today's guide, it is surely one of the most economical ways to be competitive in International historic motorsport. 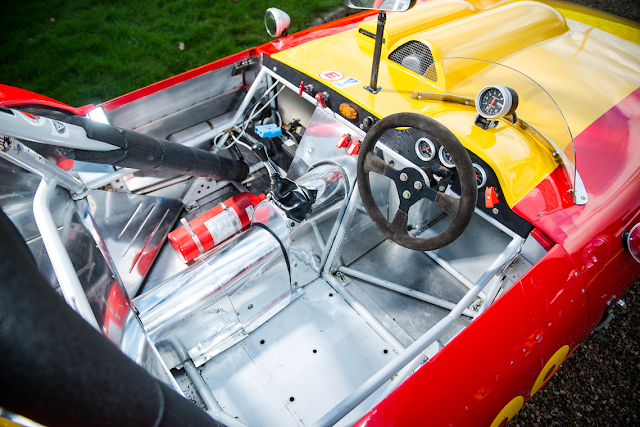 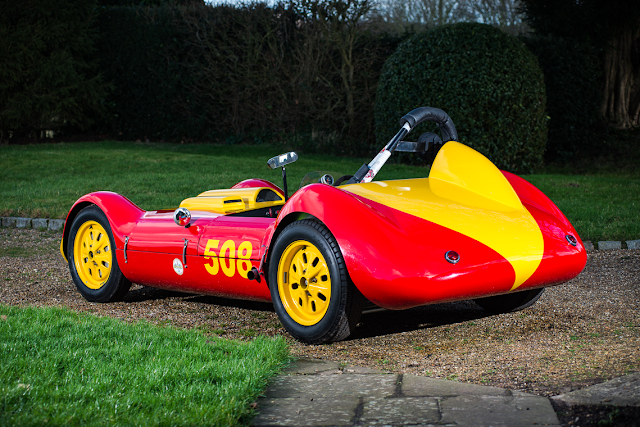