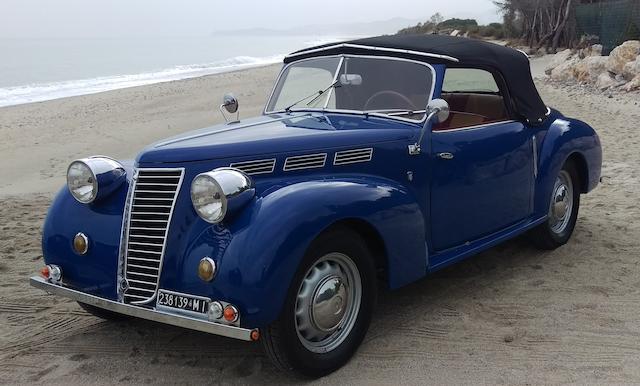 Coachwork by Carrozzeria BertoneChassis no. 317642* From one of Italy's most respected styling houses
* Carefully restored in 2012
* Registered in ItalyFIAT's first mass-produced small car had been the 509 introduced in 1925, a highly successful design that succeeded in bringing civilised motoring within the financial reach of ordinary Italians. Introduced in 1932, its successor - the 508 Balilla - represented even greater value for money, being some 40 percent cheaper than the 509. Powered by a 995cc, four-cylinder, side valve engine producing 20bhp, the 508 featured a cruciform-braced chassis frame, three-speed gearbox (four-speed from 1934) and hydraulic brakes and could comfortably top 50mph. In 1937 the much-improved 508C Balilla 1100 arrived powered by the 1,089cc, overhead-valve engine previously seen in sports versions of the original. Styled like it's 1500 and 500 Topolino siblings, the 508C proved an immense commercial success, over 250,000 being sold up to 1939 when it received a front-end makeover, the Balilla name being dropped at the same time. Production of the 1100 continued post-war, only ceasing in 1948 when it was superseded by the 1100-B, which boasted an increased power output (35bhp), revised suspension, and a redesigned interior. In this improved form, FIAT's popular 1100 lasted only until 1949 and thus is relatively rare in 'B' specification. The successor 1100-E model was built from 1949 until 1953 and is much more numerous. This pre-war line eventually came to an end in 1953 with the arrival of the all-new unitary construction 1100-103. Built in 1949, the 1100-B convertible offered here carries stylish coachwork by Carrozzeria Bertone of Turin. Company founder Giovanni Bertone had retired in 1945, but before then had recruited Count Mario Revelli de Beaumont as a styling consultant. Revelli's first job had been with Stabilimenti Farina, from where he moved on to work for FIAT and also the recently founded Pinin Farina. He was an exceptionally influential designer, working later for General Motors and Simca, and is credited with introducing American styling ideas, as is evident from the 'transatlantic' lines and accents of this FIAT convertible. According to the vendor, this beautifully presented FIAT 1100 convertible with its distinctive Bertone body was carefully restored in 2012. A most elegant coachbuilt FIAT soft-top, from one the greatest names in Italian automotive styling, this 1100-B would be a welcome entrant into Concours d'élégance events the world over, or can simply be used and enjoyed for continental touring in style. Described by the vendor as in generally good condition, the car is finished in blue with red/beige interior and is offered with Italian registration documents.