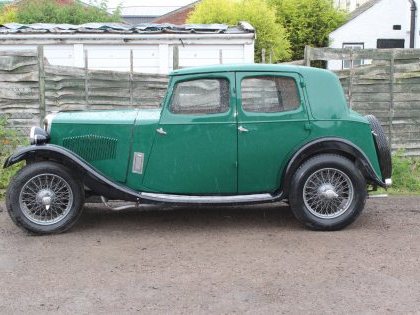 The Riley Nine was introduced to huge acclaim in 1926 and featured a very advance four-cylinder 1100 cc engine with overhead valves operated by short pushrods from two camshafts set high in the block. This proved very powerful and efficient, and with the new advanced chassis moved Riley into a higher league and gave rise to a series of superb sporting cars. 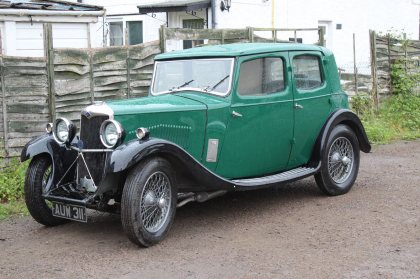 The low build of the chassis and the design incorporating the rear seats within the wheelbase allowed a relatively low body line and the resulting radical new saloon, now called the Monaco, was at once a style leader, and sold very well at a price of £298. The saloon was available with aluminium panelling as here, or with a sporting lightweight fabric body on Weymann principles. The forward opening front doors, high waisted body, narrowing significantly towards the chassis, with low seating and narrow roof made these cars very appealing. 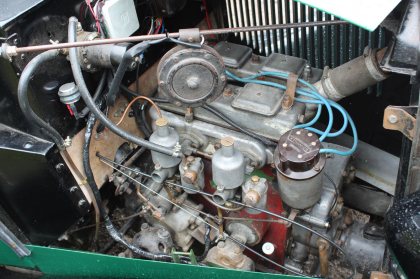 Although the V5c states that this is a 1932 car, the chassis number indicates it is actually an early 1934 model.

Little is known of its early history, but the car spent time in London and North Wales, in the hands of various enthusiastic owners, until acquired in sorry state by the previous keeper.

AUW 311 was then sold to the current vendor, who has finished the Riley to a very high standard. Now in a wonderful period green, with black wings and re-trimmed seats etc 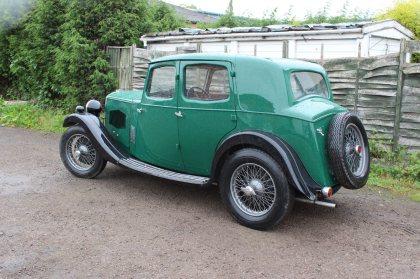