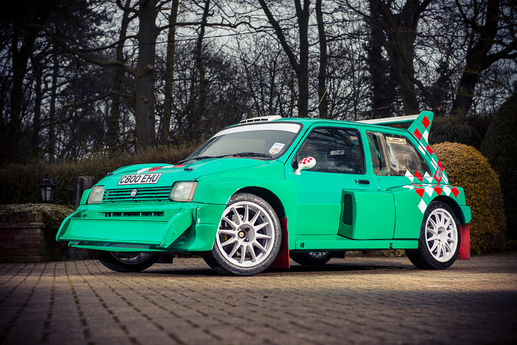 In the mid-1980s, the 'Group B' race category of the World Rally Championship inspired the wildest, most powerful rally cars ever built. The MG Metro 6R4 was born out of this short-lived turbocharged era and Austin Rover's optimistic thirst for motorsport success after the TR7 V8 and TR8 rally cars had hung up their competitive boots. The entire project was the brainchild of Austin Rover Motor Sport Chief, John Davenport. Davenport decided to follow the lead of Audi's revolutionary permanent 4WD transmission and once the green light was given, he collaborated with the best engineering brains in the land. Patrick Head and John Piper from Williams F1 were brought onboard as not only were Williams the best F1 team at the time but they were also sponsored by the company.
In December 1982 the finished prototype was delivered to Cowley for in-house development to begin. However, it wasn't until 1984 that the 6R4 was introduced to the press in order to quell increasing speculation surrounding the project. Beneath its skin, the puny A-Series engine/front-wheel-drive package was replaced by a David Wood designed 3-litre, 90-degree V6 situated behind the front seats and driving all four wheels. Twin-cam cylinder heads modeled on those of Cosworth's Formula 1 DFV V8 engine ensured the 6R4 was a true giant killer.
The car appeared in two guises. There was a so-called 'Clubman' model, a road going version developing approximately 250 bhp, of which around 200 were made and sold to the public. A further 20 were taken and built to International Group B specifications. However, in 1986 Group B rallying was scrapped after a series of fatalities among drivers and spectators. Just as teething problems were being ironed out, the 6R4 was denied any chance of glory on an international stage.
Happily, that was not the end of the story and, with the help of the various governing bodies, detuned versions (the capacity was limited to 2500cc) of the 6R4 were allowed to continue rallying at a national level - something they do with great success to this day. They also achieved a stellar career in Rallycross.
This 6R4 was initially prepared for Lyndon Barton by Rex Paddock Motorsport, however, on the 1998 Mewla Epynt Rally a crash destroyed the shell but, surprisingly, when Rex Paddocks stripped the car out he found most of the mechanicals completely unscathed. The damaged shell and original logbook, which had been given to Michelin by British Leyland for tyre testing with a normal Metro ID, was sold on. Barton was then able to purchase a rolling shell from Dave Appleby, the renowned 6R4 expert and Tony Ponds ‘works’ 6R4 technician. So with factory approval, the 6R4 was granted a correct 6R4 ID making it possible for the DVLA, with the correct provenance, to issue an age related plate.
The car has been campaigned latterly by Ron Aiken of Mainline Haulage from 2001. From then until 2008, he competed in an estimated twenty-five tarmac events with four outright wins, six top three results and rarely finished out of the top ten for the remainder. Between 2009 and 2013 the 6R4 was laid up in dry storage. For the 2014 season, the engine was re-built by Mike Barratt Race Engines in Lincoln and Ian Chamberlain Motorsport re-fitted it and prepared the car. He finished 2nd overall in the Wigan and District Motor Club 'Cetus Stages' and 4th overall at 'Adgespeed', however, in 2015 the car retired at Rockingham and finished 10th at MIRA despite gearbox problems. Last year, Bara Engineering overhauled the large-tooth dog box and thick-wall centre differential. The 2.5-litre engine runs on slide throttles and a Lucas engine management system. The Metro is now on the button and ready to compete with a full MOT.
With 'Group B' rally cars hitting the £400,000 mark, British Leyland's very capable answer to the elite manufacturers 'Group B' cars, now looks incredible value 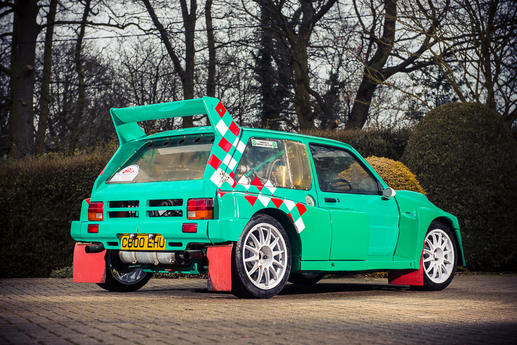