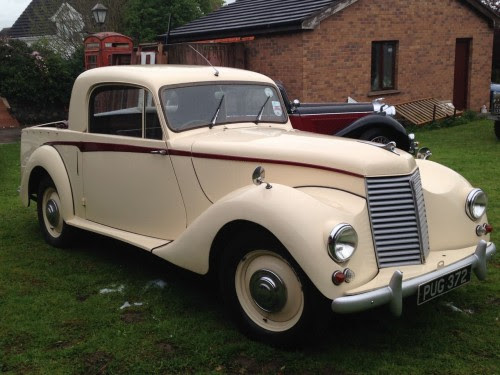 Armstrong Siddeley was established in 1919 as a result of the amalgamation of Armstrong Whitworth Development Company of Newcastle-upon-Tyne and car maker Siddeley-Deasy of Coventry.
The Coventry-based firm established itself as one of the UK's most respected manufacturers in the pre-war and immediate post-war era, producing staid but well-built luxury saloons rather than overtly sporting machines. All cars were named after aircraft, a logical move since the company was foremost an aero engine maker, a field in which it gained vast experience during the war years.
The Whitley 18 was made from 1949-1954 and was available as either a 4- or 6-light saloon made of steel and aluminium panels fitted over a wooden frame, or with an unusual pickup body aimed at the Commonwealth markets. The engine was a smooth 2,309cc six-cylinder with a tax rating of 18hp that had first appeared on export versions of the Tempest, coupled with a choice of conventional four-speed synchromesh or Wilson pre-selector gearbox.
The chassis used independent torsion bar suspension at the front with a conventional live axle with leaf springs at the rear, while a Girling hydro-mechanical braking system provided the stopping power, the front drums hydraulically operated while those at the rear used rod and cable.
During its 7-year production life, 4,321 Whitleys were produced in total, of which just 717 were pickups, in either Station Coupe (double cab) or Utility Coupe (single cab) format, most of which were exported to Australia and all but 20 with the four-speed manual gearbox. Armstrong Siddeley continued to make cars until 1960 at which point it went back to concentrating on its core business of aero engines.
Dating from 1952, this rare Station Coupe is believed to be one of the last pickups built and, instead of going for export, it is thought to have been retained by a director of Armstrong Siddeley for his own use. Restored about 15 years ago by Barnes Coachworks of Frome, we are advised that it was originally blue, now cream with a red interior, and has a conventional floor-change gearbox. We are also led to believe that there is only one other double cab model extant, in far-off Sydney Australia.
Said to be in good order throughout, this highly versatile vehicle can transport six people and considerable cargo in comfort and will be a truly unique addition to any collection. Supplied with a V5C (which erroneously states the year of manufacture as 1957) and sundry other documentation, it also has a distinctive PUG registration number which would make it an ideal promotional vehicle for a dog-grooming or kennel company. Given its extreme rarity, you are unlikely ever to see another for sale, making this a once-in-a-lifetime opportunity that is not to be missed.
Head Office
Classic Cars
Brightwells
Easters Court
Leominster
Herefordshire
HR6 0DE