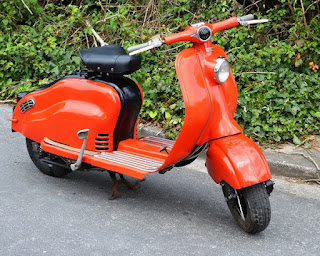 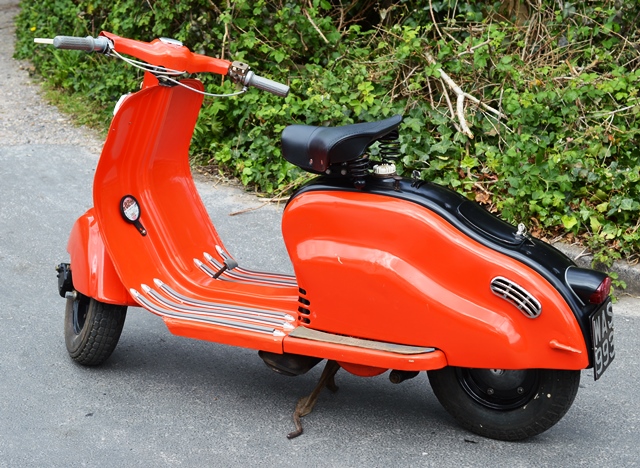 The well established 125cc Lambretta LD 125 was joined by a 150cc bigger brother in October 1954. New features included the chrome silencer, often known as the 'coffee pot', damped front suspension to aid rider comfort and a twin 'push and pull' cable operated gear change, in place of the single Teleflex cable of the 125. Top speed was quoted as 55mph yet manufacturer, Innocenti, still claimed fuel consumption to be 140mpg, identical to that of the 125. The LD 150 was very popular and outsold its smaller brother.


The so -called Mk. II LD 150 (there was no Mk. 1, as the 150 only appeared when the LD 125 was in Mk. II form)  featured an inside leg shield toolbox which also housed the speedometer and the now very are option of one other additional gauge, usually a clock. Colour choices were green, grey, beige and red.  There was also an electric start version, called the LDA 150.


The Mk. III version launched in January 1957 featured an epicyclical kick starter and the speedometer was now mounted in a purpose built housing which also included the horn and mounted on top of the handle bars. The rear of the scooter gained a more streamlined look, with a cast rear light unit bolted onto it and the toolbox door now behind the rear seat. A new air taken to the rear of the frame through a rubber hose helped reduce induction noise, as well as allowing the engine to rev more freely. Colour choice was now green, grey, beige, off-white or blue with contrasting side panels in blue, maroon, red or green. In the UK the Lambretta concessionaires produced a variant called the Riviera. This model came as standard with a whole host of extras, namely front windshield, rear carrier with spare wheel, heel plates and extension boards. It was thought this model was produced to help make way for the incoming Li series and if true, the marketing strategy, although successful at the time, had the unintended consequence of the Lambretta concessionaries having no scooters left to sell whilst waiting for the new model. With no Lambrettas forthcoming from Italy, French built LDs were imported as a stop gap to help fulfill outstanding orders.


The 1957 LD 150 offered today has been UK registered from new. The vendor purchased it approximately thirty years ago as non-runner and without any paperwork. It has been renovated both mechanically and cosmetically over a number of years to achieve what the vendor describes as the current very good, usable condition. We are informed that it goes extremely well, being in the vendor's opinion one of the best LDs he has ridden. This Lambretta is an older restoration with a pleasant patina and comes with V5 registration document, an old MoT test certificate, various bills , an original toolkit and three Lambretta handbooks. Interested parties should note the registration plate is an age related number since, as mentioned above, all paperwork was lost following a very lengthy period off the road, prior to the vendor's ownership.


The LD 150 is regarded as the most desirable and usable of the shaft driven Lambrettas. This highly collectable example is offered at a most attractive estimate.